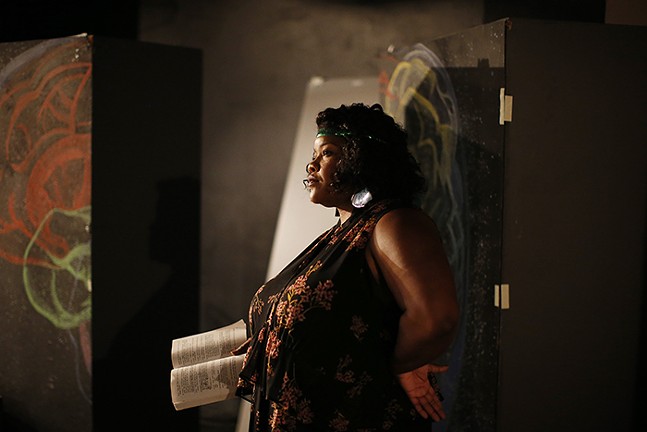 CP photo: Jared Wickerham
vanessa german rehearses for for a play in Downtown Pittsburgh in 2018
The Frick Pittsburgh has partnered with one of the city's most prominent artists for a multi-year project that includes powerful new work, events, and more.

The museum and historical space announced that it will embark on a visiting artist partnership with local artist, poet, and activist vanessa german. Over the course of three years, german will create what is described in a press release as “a community-centered body of art exploring the transformative power of love using the Frick’s site as a departure point.” The partnership will unfold in phases, leading up to a large-scale exhibition expected to debut in 2023.

Executive director Elizabeth Barker calls the move a “watershed partnership for the Frick.” It's also being described as demonstrating the potential for museums and other public spaces to function as agents for change, as it addresses issues such as the trauma of structural racism and white supremacy.

The partnership marks the first time The Frick Pittsburgh has worked closely with german, a multi-hyphenate artist who, over the past decade or so, has made a name for herself in Pittsburgh and beyond. (Previously, german moderated a series of programs at the Frick centered on TENDER, a poetry anthology she worked on with acclaimed local author Deesha Philyaw.)

The announcement comes less than a month after german saw ArtHouse, her creative community hub in Homewood, damaged by a fire. Since then, a GoFundMe campaign to repair the space has raised over $123,000, far exceeding its $75,000 goal.

The first phase of the partnership with The Frick is the release of "nothing can separate you from the language you cry in," a multi-sensory installation of new sculpture works on view at Frick Art Museum. Launching Wed., March 17, the installation presents three altarpieces created as a “reckoning with the countless deaths of Black citizens killed at the hands of police.”

“This work is personal,” says german. “How do I grieve, mourn the losses of so many Black people killed by the police? How do I stay whole and safe and creative in an environment where Black women are shot and killed by the police in their own homes, while playing video games, cooking, or even sleeping?”

The installation is the first of three series for german's residency. The sculptures on display will be augmented by hand-crafted blue glass objects, custom-made for german by Pittsburgh Glass Center artisans. Adding the multi-sensory element are musical selections from Unburied, Unmourned, Unmarked: Requiem for Rice, a contemporary classical symphonic work about the history of Africans enslaved on Low Country South Carolina and Georgia rice plantations.

The work will be installed among the Frick Museum's collection of Italian Renaissance devotional paintings, which Barker views as a significant choice.

“Vanessa German is a singular and inspiring artist, whose project couldn’t feel more urgent,” says Barker. “By choosing to install 'nothing can separate you from the language you cry in' within the Frick’s collection of Renaissance paintings, she’s raising important questions about how we mourn and heal, whose experiences belong in museums, and how we experience historical artworks — including what is gained or lost when ritual objects move onto gallery walls.”

Frick associate curator of decorative arts Dawn Brean expands on this, saying german's vision “activates this space in such a compelling way. Her exploration of pain and grief, the personal and communal, brings a new and incredibly meaningful perspective to the devotional Italian Renaissance paintings that surround her altarpieces.”

The partnership will also feature online events with german, including a film screening, a poetry reading, and a talk with Dr. Edda L. Fields-Black, associate professor in the Department of History at Carnegie Mellon University and the executive producer and librettist of Requiem for Rice.
© 2023 Pittsburgh City Paper