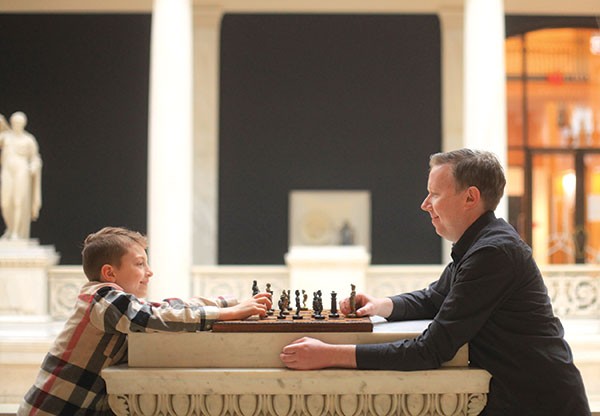 Why can’t we both win? Author Kevin Zollman (right), co-author of The Game Theorist’s Guide to Parenting, strategizes with young Nicco.

This tool bag of parenting strategies uses aspects of game theory to illuminate the complicated task of negotiating with children. Game theory is the branch of economics dedicated to establishing harmony between decision-makers.

Zollman’s first book for popular audiences is a collaboration with journalist Paul Raeburn, the award-winning author of four books including Do Fathers Matter?

To Zollman, a philosophy professor and game-theory researcher, today’s boom in parenting advice from washed-up celebrities leads to ineffective strategies at home. Parenting books should rely on quantitative data and real stats — not whimsical anecdotes. So, Zollman and Raeburn offer a breezy guide that’s nonetheless smartly backed by science.

Each chapter opens with a typical dilemma for parents, whether it’s getting the children to put their toys away or facing wails of “That’s not fair!” and “You can’t make me!” Working carefully crafted economic approaches into the text, Zollman and Raeburn use incentives and bargaining in the ultimate game — successfully raising children.

Zollman describes the book’s wide range of applications — even for those who, like himself, have no tots in tow. (Raeburn has two children.)

“I think that it has this really broad appeal,” says Zollman. “By focusing on parenting, we show how it’s applicable to everyday life. You could use it with your kids, with your friends, with your coworkers.”

Generally, game theory examines how parties interact to achieve compromise: Think the famous Prisoner’s Dilemma, in which each of two criminal suspects must decide, separately, whether to incriminate the other to receive a lighter punishment for himself — or risk harsher penalties if both confess.

Zollman’s research specialty combines game theory’s mathematical modeling with social behavior, as a way of studying the evolution of language and social structures.

In The Game Theorist’s Guide to Parenting, Zollman moves beyond the confines of his niche. In the chapter “I Cut, You Pick,” Zollman and Raeburn explore “cake-cutting economics” (or fair-division economics), addressing the ways decision-makers can best divvy up resources.

Imagine: You have a sheet cake for your child’s birthday. Half of the cake is marble — vanilla and chocolate swirled together — and slathered with chocolate frosting. The other side is vanilla with strawberry frosting. A roomful of ravenous children watches you slice the pieces, each wishing for a particular bite. “Since kids have different preferences, how do we cut the cake fairly?” the authors ask.

Zollman and Raeburn theorize about what “fair” means in this context. Because you can’t definitively decide what is “fair” for someone else, the parent cuts the cake but lets the each child pick the piece he or she wishes to eat. In this way, everyone is as pleased as possible.

Zollman and Raeburn’s theory is applicable to many situations — even roommate dilemmas. Suppose your rental has four rooms, each varying in size, number of windows and closet space. It isn’t “fair” for each person to pay the same amount. But the housemates can agree on a price for each room and then each roommate can select a room based on her needs.

Zollman contends that fair-division economics can explain how children, and society, learn morals.

“Our notions of fairness develop in this weird asymmetric way,” says Zollman. “It’s not until later in development that we realize that it’s not fair that I get more than you. I think that’s really deep and important — it teaches us about society at large.”

Throughout the writing process, Zollman had to continually re-educate himself. “I actually didn’t know much about [fair-division economics],” he confesses. “There’s something about writing that forces you to recognize you have little gaps in your knowledge.”

Writing his first book has been a rewarding challenge for Zollman, continually informing his teaching. Last fall, Zollman used the text in a course on Enlightenment economist and philosopher David Hume.

“I was able to use examples from the book to teach his theory,” said Zollman. “That seemed to really resonate with the students.”

Raeburn and Zollman’s book is a bible for every parent — and every adult who must make decisions with his or her peers.

“I knew this already — that parenting is really hard — but one of the things that I came to appreciate is all of the ways in which it is really hard. It’s easy for people to be judgmental of other parents,” says Zollman. “I have to admit I could be that way sometimes, too. I’ve gained a new appreciation for parenting and how truly hard it is.”