Drag has been edging into the mainstream at least since RuPaul’s Drag Race; these days, a fair swath of Middle America is comfortable kicking it about wigs and throwing shade. Of course, our cults of masculinity and femininity have hardly gone missing: What we’re seeing in North Carolina’s anti-transgender law and elsewhere is surely backlash in a culture where issues of gender are being discussed openly like never before. 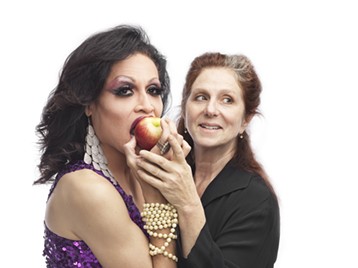 Photo courtesy of Frank Walsh
Jezebel D'Opulence and Beth Corning
The thoughtful and entertaining new show from Beth Corning’s Glue Factory Project pairs the choreographer with local drag icon Jezebel Bebbington D’Opulence for a series of vignettes exploring gender, including what it means to be a woman.

Much of the show focuses on women’s struggle for equal regard. In an eloquent opening solo, Corning moves, as if through a dense fluid, beneath a video screen on which are projected pairs of words referring to positive traits in men (“strong,” “virile”) as perceived in women: “dominating bitch,” “slut.” Later, Corning does a clever solo with a dancing mirror (wheeled about by an assistant) in which her character enumerates the careful-stepping strategies women must employ to navigate daily life in a way men take for granted.

“I couldn’t be … entitled to safety,” she says she recognized, and later notes “the privilege of obliviousness” granted men. (The text for this part is by local author Sarah Shotland.)

Women must constantly think about how they’re being perceived by others, Corning says. “Being a woman is a performance I engage in every day. And that’s because there’s always an audience.”

Segments featuring Jezebel, meanwhile, largely explore what it means to be born in a male body but to consider oneself female. She first appears with Corning in matching unisex garb, in a sequence set to recorded interviews in which Corning asks interview subjects to “identify yourself” (genderwise); in voiceover, Jezebel recounts the difficulties of growing up gay in Puerto Rico.

The show’s themes overlap when Corning ends her mirror solo by saying, “I’m exhausted by the act” of being a woman — followed immediately by Jezebel’s first appearance in full drag, in a sequined dress, red push-up bra and four-inch stilettos (also sequined), embracing the audience Corning’s character wishes would grant her a reprieve.

Archly, Jezebel reads from an academically worded essay about the seeming contradictions of drag as a performance of womanhood — and a caricature, at that. But these are contradictions Jezebel immediately erases with her signature performance of Tina Turner’s “Proud Mary” – expertly lip-synced, with the moves and cheekbones to do Miss Tina proud indeed.

A later segment featuring both performers includes some amusing audience interaction and a demonstration of how each approaches walking in heels.

Corning and Jezebel have different movement styles – the contrast between a seasoned drag artist and a life-long professional dancer and contemporary-dance choreographer. Yet so much of drag is mime, after all, and Jezebel brings unquestionable authenticity.

Each of the show’s two big themes – the struggles of women for equality, and womanhood as performance – could support a show by itself. To integrate them is ambitious, and in Right of Way the overlap is both enjoyable and provocative. (Though I'm tempted to sum it up with a quote from RuPaul: "You're born naked and the rest is drag.")

Right of Way has four more performances, starting with tonight’s at 8 p.m. and concluding with the 2 p.m. show on Sunday.

Tickets are $25-30 and are available here. Admission to the Sunday matinee is pay-what-you-can at the door; regular-priced tickets can be purchased online ahead of time.