“Look up Miss Universe 2015,” he says, which leads me to a YouTube video of that year's winner Pia Alonzo Wurtzbach answering a question about the United States reopening a military base in her country, the Philippines. (Songco calls her response “fabulous, but problematic.”)

He later tells me to watch Filipino pageant reaction videos, introducing me to footage of fans, both men and women, huddled around a TV before absolutely losing it when their contestant wins.

He does this to illustrate one aspect of modern Filipino culture, an obsession with beauty pageants that has led to the Southeast Asian country winning Miss Universe multiple times just over the past decade. This is incorporated into his installation Society of 23's Trophy Game Room, a work in which Songco plays different members of a fictional fraternity in order to explore his identity as a queer Filipino in America.

The pageant culture plays out in several portraits depicting Songco as various characters in what he calls his “brotherhood,” donning sashes and crowns won during a fake fraternity pageant, “Mr. 23.” In these photos, as well as others, Songco says he dressed in Abercrombie & Fitch, J. Crew, and formal clothing from his own fraternity days at Carnegie Mellon University.

“That's all me,” says Songco, who graduated from CMU in 2005 and now lives in Grand Rapids, Mich. “I'm drawing from my own personal life of trying to fit in.”

Society of 23's Trophy Game Room will open Fri., March 12 as a solo exhibition at the Mattress Factory, revealing new work Songco produced during a residency through the North Side museum. Songco says being chosen for the residency gave him a chance to experiment with and expand Society of 23, a project he has worked on over the years, producing fake trophies and other objects for the brotherhood, all of which will appear in the new work.

“Originally, what I was going to do was create this installation and then perform within the space, but because of the pandemic, I chose not to travel to Pittsburgh for this residency, which is completely bittersweet,” says Songco who saw it as his homecoming back to the city.

Instead, he ended up building a set in his basement, where his partner helped him shoot the images and footage needed for the piece. This included taking static shots of himself as the various brotherhood members, and then using Photoshop to pull all the “bros'' together into different scenarios. The project even has its own Instagram account (@societyof23) featuring “candid “photos of the bros hanging out, shopping, and posing together.

“I'm trying to understand how to construct a culture through the Society of 23, understand what they wear, what they do, their behavior, their celebrations,” says Songco.

The process includes individualizing each bro right down to the clothes they wear, their hairstyles, and even their signature. “What's the correlation between this person's messy handwriting and this person's hair?” says Songco. “Maybe their hair is as messy as their handwriting, right?”

He believes this process comes from trying to navigate his own upbringing as the child of Filipino immigrants who encouraged him to Americanize as quickly as possible. Growing up in New Jersey, Songco says he retained very little of his Filipino culture, including learning his parents' native language, Tagalog.

He remembers having a television in his bedroom, which he says served as a kind of tool for helping to assimilate him into American culture. As a result, he became a fan of reality television shows, including the long-running MTV series The Real World, for which he auditioned.

“I wanted to be on it, but I was also closeted, and I didn't come out until after college,” says Songco. “I still had an issue just telling a story, and I think that's a talent of people on reality television, is that they’re able to articulate something and it just makes sense and it's easy to edit.”

This interest resulted in creating an hour-long episode of a reality show about the brotherhood called The Fabulous Society of 23. The episode includes the visual tropes of reality television, including the confessionals where contestants speak directly to the camera, except the footage is silent, the audio replaced with subtitles of lines from the U.S. Constitution.

He explains that reality television and his days as a child actor fed his desire to be a performer, but it also made him more aware of his otherness. He recalls going to open casting calls, hoping that the audition description would say “all ethnicities welcome.” 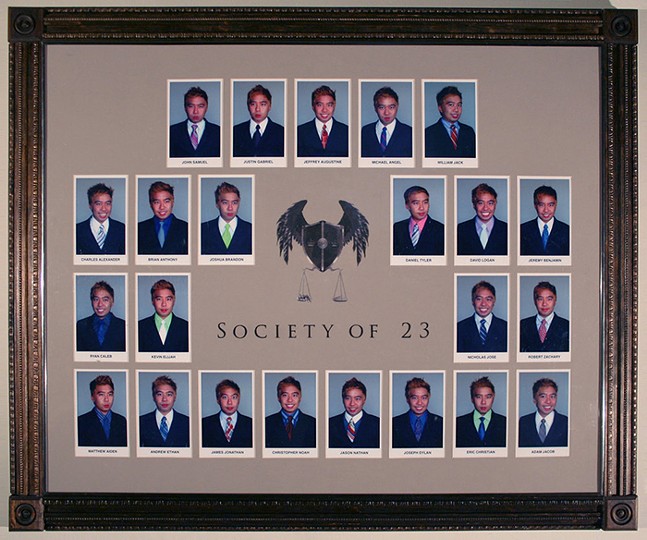 “I knew that the word 'I' in American culture was not me, and in the stories I was going to perform in and be a part of and share in some production, I was not the protagonist,” says Songco. “It's always a white guy and white actors, and you're, like, the friend.”

He sees the Society of 23 as a chance to reimagine narratives where the emphasis would usually be on the “straight, white male as the protagonist.”

His motivation to deconstruct reality extends beyond television into the country's current struggles. He says a major part of the installation serves as a “reaction and exploration into what has happened in the last few years, particularly with the Trump administration and how that affected American culture.” This comes across most prominently in “Great,” a large photograph on vinyl showing the bros wearing red hats and hoisting a trophy.

Through “Great,” Songco says he wanted to examine the meaning of the red hat, particularly after Jan. 6, 2021, when a crowd of avowed Trump supporters, many wearing signature red MAGA hats, stormed the U.S. Capitol in an attempt to stop the certification of Democratic candidate Joe Biden's election win.

“I wanted to explore this symbol of the red hat because I think we're at war with symbols, and we need to make sure we keep symbols fluid but also not allow them to go to dark side,” says Songco, adding, “I don't want people to be scared of a red hat.”

He says that by providing an opportunity for people to interact with the image, they can go from perhaps being triggered by the initial sight of multiple red hats to looking closer and reinterpreting it. As someone who lives in a swing state like Michigan, which went to Trump in 2016, only to flip for Biden in 2020, Songco says he understands the power of an object that has become so entangled with Trumpism. However, he believes that being allowed to process the emotional response to it could serve as a step towards healing.

“I think I'm playing a lot with people's expectations of what they are familiar with right now based on what we've been fed the last four years,” says Songco. “And I'm hoping to at least provide some kind of safe space where we can let our guard down and take in all the layers in this installation and arrive at a different meaning.”
Society of 23's Trophy Game Room. Opens Fri., March 12. Continues through mid-November 2021. Mattress Factory. 500 Sampsonia Way, North Side. $10-20. Free for members. mattress.org
© 2021 Pittsburgh City Paper