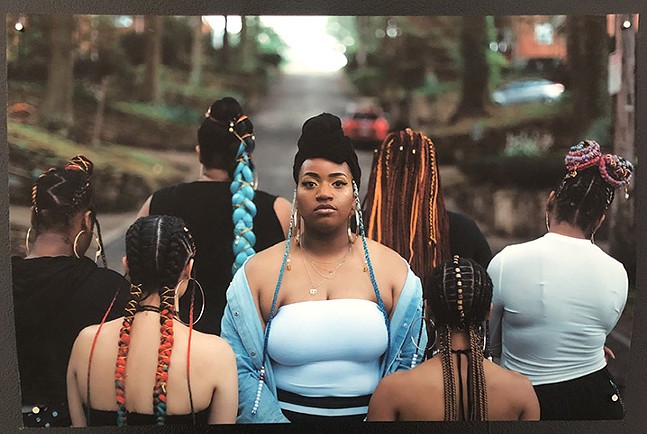 CP photo: Dani Janae
Mia Marshall's "Medusa" on display at Roots Run Deep at Brew House Association
Black hair has been the subject of discrimination and bias for centuries. Whether it is in its natural state or styled with extensions, Black people’s hair has been deemed unprofessional and unruly by many who have hiring power in today’s work industry, resulting in legislation like the CROWN "Creating a Respectful and Open Workplace for Natural Hair" Act, which declares discrimination based on an individual’s hair illegal. While Pittsburgh and Allegheny County recently passed bills banning hairstyle discrimination in employment, housing, real estate, and public accommodation, the CROWN Act has not been implemented by every state, and it doesn’t apply to private institutions, so many Black people exist without protection. Despite prejudice, however, natural hair has been a part of a cultural revolution in the Black community. Hair shows and beauty expos still exist to uplift and shine a light on the creativity and versatility of Black hair, especially surrounding Black women like myself.

When Coleman first applied for the Brew House’s Prospectus Series, a development program that awards selected curators with a $2,500 stipend and financial support for installation materials and exhibition promotion, she had no formal arts background but had curated previous shows at multiple institutions including the August Wilson African American Cultural Center, Bunker Projects, and Gallery One, and wanted to take this opportunity to hone her curatorial skills.

“I was really inspired by The Hair Appointment, which was a Brooklyn-based show that fit within the same theme of celebrating Black hair and culture, and I wanted to bring something like that to Pittsburgh and have it be more Pittsburgh-focused, and also highlight local salons and women working within Black hair culture,” she says.

Coleman says she had previously done a show that focused on colorism — discrimination against people with darker skin tones — and wanted to host a show that confronted texturism and featurism as well. These two areas of discrimination also position that features and hair textures associated with Blackness are inferior or less attractive. Here in Pittsburgh, Coleman says women like Tamiah Bridgett, founder of Pittsburgh natural hair group “It’s A Natural Thang,” are doing the work to dismantle these modes of oppression. The show features video of Bridgett’s natural hair events projected on a wall.

“She's creating safe spaces for Black women, especially darker skinned women, women who don't have what would be considered acceptable hair types,” says Coleman. “She's really being intentional about creating space for them, and I'm very grateful that she was able to be a part of this.”

Coleman’s goal for the show was to provide artists a space to share their own personal experiences with conversations around Black hair, whether that experience was with natural hair or synthetic hair and relaxers. The show is sure to create a bit of nostalgia, especially for Black women, with works like a sculpture of a giant hair ballie made by Steven Montinar and a large portrait of Pink’s Lotion by Ayanna Nayo. Coleman was adamant about giving artists this space, as her personal hair journey was not reflective of Black culture at large.

Biases like featurism and texturism have made Black people endure very harmful messaging about our hair. In the past, this resulted in a push for Black women to straighten their hair with no lye relaxers and heat, or some would resort to having synthetic hair as an alternative. The story is a little different for Black men, who are told that a short cropped hair cut is the only way to appear approachable and professional. Women still use these hairstyles now, but Coleman says it’s more of a personal, aesthetic choice instead of a way to conform to white supremacist ideals about Black hair. 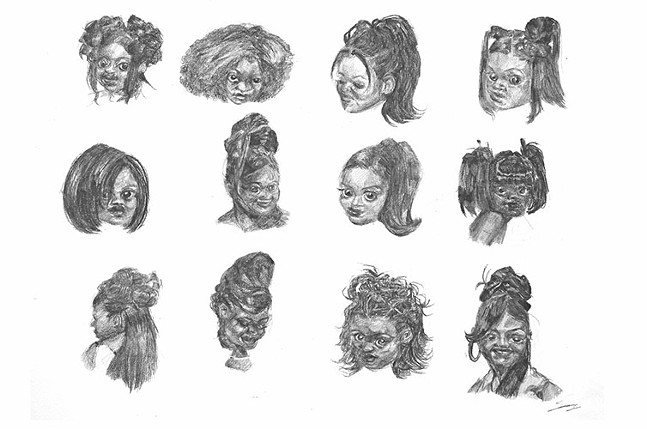 Shori Sims's "Salon Poster #1"
“I definitely appreciate the versatility of Black hairstyles, and we may choose to wear wigs that mirror straight white hair, but I think it is a style choice, and we're past the point of doing it to fit in,” says Coleman.

One thing Coleman was very clear about is who she wants to see this show. “I don’t center the white gaze in my work, and I did not think of white people at all when I put the show together,” she says.

Coleman was firm in her position that this show is for Black people to see ourselves and our story reflected, connecting us across the diaspora. This is especially important for a city like Pittsburgh that, though it touts the “Most Livable City” banner, it has been rated among the worst places to live for Black women. Coleman says she wants mostly for little Black girls and boys to see this show, but young Black girls in particular because the messaging about how our hair is ugly or unmanageable starts early. An organization called FroGang, who “promotes the importance of taking pride in natural hair," brought a group of young girls to the show, and that was an affirming experience for Coleman.


The places we get our hair done, from salons and barbershops to front porches and kitchen sinks, are sacred places. They serve as a connection to our ancestry and our present community. Having those places showcased in an artistic space was very emotional for me as someone who went to go see the show. This exhibit is part of a curriculum to deprogram the years of negative socialization around Black hair. We have to “eliminate everything we’ve been socialized to think that aligns with white supremacy,” and that kind of deprogramming often starts in the places we get our hair done.

“I think it serves as a place for convening. I think it serves as a place for transparency. Your barber, your stylist, they kind of see you at your worst. My stylist has seen me through two pregnancies,” says Coleman. “Last year, I had a pretty severe bout with my mental health, and I was still able to see my stylist and get my hair done and feel good about myself. I could be in a space with other Black women and feel that connectedness that's so necessary. Sometimes that's all we have, and they are valued, cherished spaces.”
Roots Run Deep Continues through Sun., March 6. Tickets are available on a sliding scale and must be reserved to receive the Zoom link. Email info@brewhousearts.org or call 412-212-6650 with a requested date and time at least two days in advance to schedule an appointment. All visitors are required to wear masks and follow physical distancing requirements.
711 S. 21st St., South Side. brewhousearts.org