There is little question that the U.S.’s and the world’s military attention is currently heavily concentrated in the Middle East. But Democratic U.S. Senate candidate Joe Sestak brought up another area where a chilling hypothesis could play out.

The Arctic could become a new potential battleground, according to the retired Navy Admiral and former U.S. Congressman. He says that with the melting of the polar ice caps, the frozen region could become ripe for countries looking to extract its natural resources. According to the U.S. Energy Information Association, the Arctic could hold about 22 percent of the world’s undiscovered conventional oil and natural gas resources. 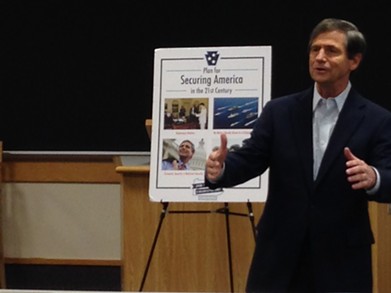 Sestak says that the number one threat from climate change is famine caused by droughts. But he questions if the country is addressing this potential polar conflict. He says, if elected, he would advocate for the U.S. to join the United Nations Convention on the Law of the Sea, an agreement that establishes guidelines and responsibilities of nations; roles in the oceans, including rules about marine natural resources.

The former U.S. Rep also talked about how the rising sea levels associated with climate change could have a negative effect on the Naval Station in Norfolk, Va., the world’s largest naval base. Rising sea levels could render the piers in Norfolk unusable, says Sestak. He adds that by focusing on diplomacy, enhancing economic partnership, and making the military run more efficiently, the U.S. can shrink its military budget.

At the event, Sestak also touted his environmental record by explaining to the audience he has been calling for a moratorium on fracking since he last ran for U.S. Senate in 2010. (To read all the Democratic candidates’ views on fracking, see City Paper’s coverage here.) Sestak believes that fracking should be halted until protections for the environment and public health are established; oversight agencies are properly staffed; and a severance tax of approximately 5 percent is put in place.

He explained to the crowd that taxpayers invested in fracking — for example, a military-developed sonar technology now used by the natural-gas industry —  and that citizens, at the least, are entitled to a 5 percent return on their investment.

Polling for Pennsylvania’s U.S. Senate race has been sparse, but a straw poll (which are incredibly small in scope) taken by Keystone Progress, a progressive organizer, of audience members at last Saturday’s Democratic debate show Sestak in the lead with 42 percent. Braddock mayor John Fetterman polled at 31 percent and former gubernatorial chief of staff for Tom Wolf, Katie McGinty, polled at 27 percent.

A survey released by Harper Polling in January had Sestak in the lead with 33 percent, McGinty in second with 28 percent, Fetterman in third with 11 percent, and the rest undecided. These polls didn’t include Findlay Township small business owner Joe Vodvarka, who has run a quieter campaign up to this point.