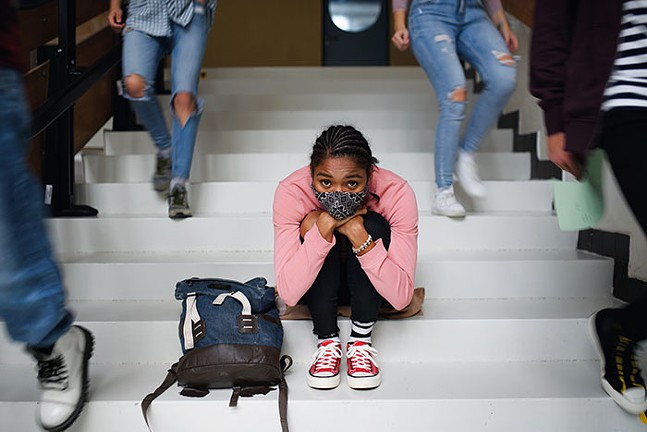 College students can be especially vulnerable to mental health challenges for dozens of reasons, including living away from home, making new friends, figuring out how to be an adult, and coming to terms with harsh realizations about the world. For many college students, the arrival of the pandemic in 2020 thrust them unexpectedly into an even more confusing realm. Now, a new study from Carnegie Mellon University, conducted in collaboration with the University of Pittsburgh and the University of San Diego, found that the pandemic has had a significant impact on the mental health of college students.

The study — titled "Lifestyle and mental health disruptions during COVID-19" — was published in the March 2021 issue of Proceedings of the National Academy of Sciences. It began in 2019 before the coronavirus pandemic hit the United States, and was initially meant to find the correlation between physical activity and wellness. Once the pandemic hit, the study shifted to focus on how rapidly college students' mental health was declining, and their increased rates of depression, along with anxiety and other mental health issues.

Silvia Saccardo is an assistant professor in the Department of Social and Decision Sciences at CMU and a senior author on the research paper. She says rates of depression typically increase slightly toward the end of a semester, but not enough to be statistically important. Once COVID-19 hit, however, there were "big increases" in depression toward the end of the semester. She also noted that students who participated in the study in 2019 showed average levels of stress and physical activity, while in March and April of 2020, the health of these metrics "declined dramatically."

In order to conduct the study, the researchers gave selected groups of students FitBits to track their physical activity, as well as periodic surveys about their mood and lifestyle.

Participants who started the study in 2020 began in February, just before the pandemic hit the U.S., and kept participating through the rest of the semester as classes became virtual and many students returned home. The timeline of the research allowed the team to compare both how one group's health and wellness changed from just before the pandemic began until after, and compare that set of information to the 2019 participants during a "regular" school year.

The study shows that the average steps measured by the FitBits declined from 10,000 to 4,600 steps per day over the course of a three-month semester. Overall physical activity declined from 4.4 hours to 2.9 hours per day.

"We estimate that at the end of the spring 2020 semester in April, an estimated 61% of our participants were at risk for clinical depression," states the study. "This represents about a 90% increase over rates of 32% in the same population just 2 [months] earlier prior to the pandemic."

These statistics should come as no surprise to many observers. The combined effects of fear, loneliness, grief, stress, and boredom brought on by 11 months of a pandemic have had an effect on nearly every American's health, regardless of their age.

In a November 2020 poll from the American Psychological Association, 74% of psychologists polled said they have seen an increase in patients struggling with anxiety during the pandemic, and 60% said they saw an increase in patients struggling with depression. In August of last year, the CDC reported that one in four young adults say they've contemplated suicide in the past month (the survey was conducted in June).

Experts are grappling with how to address such a staggering increase in mental health problems. When the researchers encouraged some of the participants to increase their activity levels over the summer, they found that it didn't lead to an improvement in their mental health.

While there is not a clear, immediate solution, Saccardo says talking about the issue openly and honestly could be crucial.