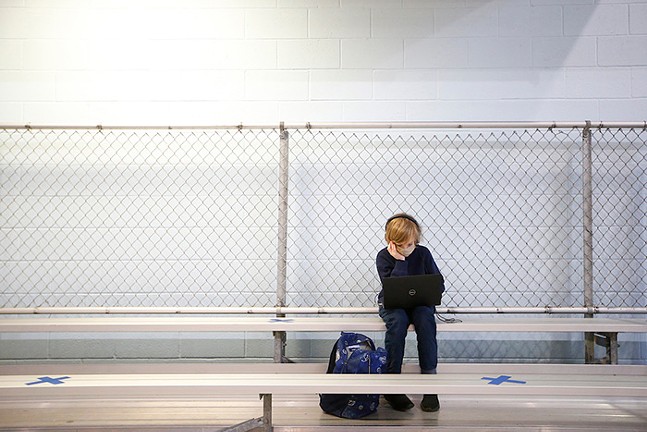 CP Photo: Jared Wickerham
Cassius Morrissey, 10, plays on his laptop in the gym at the Boys and Girls Clubs of Western Pennsylvania in Lawrenceville.
Internet access for low-income families in Pittsburgh has proven insufficient for many public school students learning remotely during the pandemic. Families have struggled with slow connections, leading to low participation rates among low-income students, which only compounds the many other issues making their education more difficult.

And Kaitlyn Brennan, an education policy consultant, points out that internet access is just one of several issues students and families in Pittsburgh face as schools remain closed by the pandemic.

“I would say, yes, connectivity is an issue,” says Brennan, adding that even with a more expensive, higher-speed internet package, access can be slow in homes where multiple kids and parents are using the WiFi, not to mention issues of having imperfect devices. “Her charger is broken, so she has to sit and hold her laptop charger in with one hand and try to navigate school with the other hand.”

Brennan serves as a facilitator for the Pittsburgh Learning Collaborative, a coalition of around 80 local organizations who banded together in response to the mass school closings that started last spring in response to safety measures related to the rapid spread of coronavirus. Organized by the education nonprofit A+ Schools, the PLC not only wants to ensure students across the region are able to learn, but that they receive the numerous other resources usually provided by schools, including meals, social interaction, and adult supervision, as well as a crucial safe space.

PLC partners like the Boys & Girls Clubs of Western Pennsylvania and the Carnegie Library of Pittsburgh are working to provide hubs for learning, access to faster internet and devices, and caregiving to busy parents who aren’t able to work remotely. But PLC worries it might not be enough.

Brennan says problems with internet access has been one of the consistent complaints they receive on the PLC Family Hotline, a number parents and caregivers can call for support and advice. To address this, Brennan says the PLC quickly mobilized ways for students to access online instruction.

One PLC partner, the Carnegie Library, procured T-Mobile wireless hotspots with a round of federal funding and began assigning them to families back in October. Dan Hensley, Carnegie Library’s adult programming coordinator, says the library now has 450 households using the hotspots.

To make them more accessible, Hensley says the hotspots were made available to any household in Allegheny County with a student, and could be borrowed with or without a library card. Families can also use them throughout the school year without worrying about paying late fines.

“We just want people to return them when they can,” says Hensley.

In addition to hotspots, he says the library system also offers digital skills services to families who need help setting up devices assigned by schools, and extended the WiFi reach at branches so that people could catch a free signal outside of their buildings if necessary.

Even with internet access, however, expecting students, especially very young ones, to navigate an online curriculum can be daunting, especially for parents expected to supervise learning in addition to other responsibilities. To help with this, PLC partners like the Boys & Girls Clubs of Western Pennsylvania created hubs that act as de facto classroom spaces outside the home, offering essential support to students and alleviating some stress for parents and caregivers who still have to work.

Boys & Girls Clubs President and CEO, Dr. Lisa Abel-Palmieri, says the organization now operates five learning hubs — in Duquesne, Millvale, Carnegie, and Lawrenceville for K-8, in McKeesport for teens, and one in Somerset County for K-12 youth. Overall, she says Boys & Girls Clubs served 11,950 kids in 2020 through all its services, including summer camps, afterschool programs, and clubs.

She adds that Boys & Girls Clubs worked with the Duquesne City School District and Allegheny Intermediate Unit to provide literacy classes and enrichment to help kids with learning loss, and collaborated on programming with Homewood Children's Village and the Larimer Consensus Group.

“We know that there are more people who need our services than ever,” she says, adding that Boys & Girls Clubs is actively looking for partners to potentially open pop-up learning programs in the summer.

Their offerings go beyond learning, however. When the pandemic hit last March, Abel-Palmieri says Boys & Girls Clubs partnered with retail company Lowe's and others to create and deliver buckets of cleaning supplies and care products to around 750 families in need. They also organize meal drives for kids facing food insecurity without school breakfast and lunch programs.

Brennan says that losing the in-person school environment especially impacts the “high population of students who are experiencing homelessness or unstable housing.” Carlos T. Carter and Brian Knight represent another PLC partner, the Homeless Children's Education Fund, and agree that barriers to education are particularly pronounced for those who bounce from one form of shelter to another, especially during the pandemic, when families face job loss and the threat of eviction. 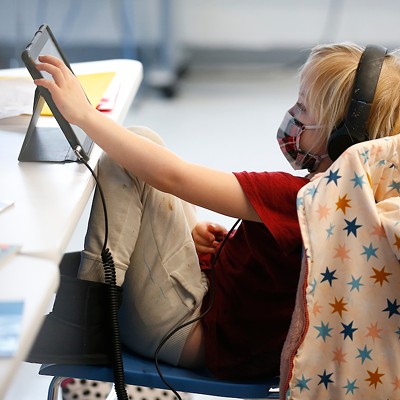 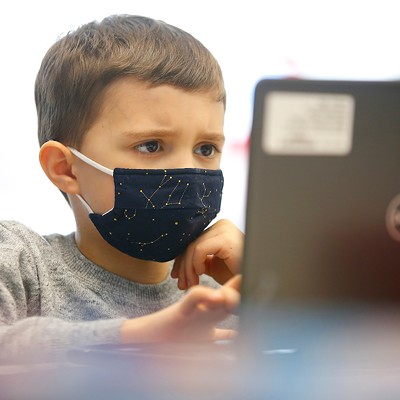 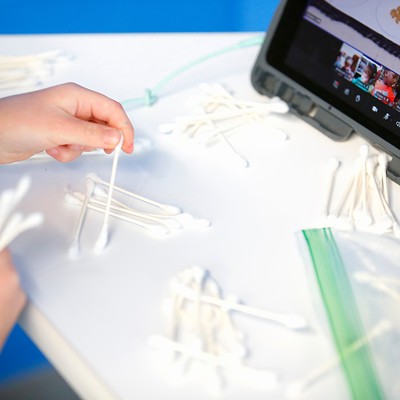 Click to View 22 slides
“We do know a lot of our young people struggle with access,” says Carter, adding that keeping track of students becomes more difficult when families are constantly moving and cannot afford cell phones and other devices needed to communicate.

Knight says they have “definitely seen some concerning attendance trends,” with data showing a number of their students missing 20-40 days of class in one semester. Even with efforts to provide kids with resources, Carter believes the “dropout rate will increase” as a result of schools remaining closed.

More worrisome, Carter says, is that, without the benefit of a classroom, kids in abusive home situations have no means of escape or anyone watching out for them, as teachers and school administrators often identify when students are in trouble.

With all of these issues in play, Brennan says PLC wants more transparency in how and when schools open. She has trouble understanding why PPS, which is the second-largest school system in the state, has not reopened for any in-person classes when others in the area have moved to a fully in-person or hybrid model.

“Why is Pittsburgh Public Schools different?” says Brennan. She claims that the city's privately run Catholic schools, which serve 14,000 students, have only seen 132 positive cases of COVID-19 since the start of the pandemic back in March. “They've never closed down for a substantial amount of time and only one of those cases can be traced back to a classroom.” 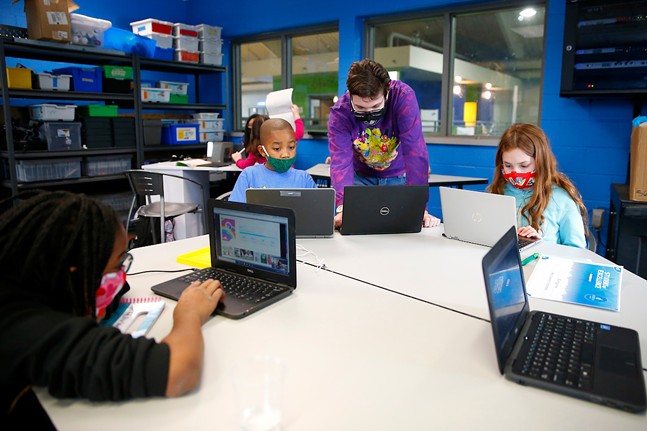 CP Photo: Jared Wickerham
Chance Pendley, Senior Youth Coordinator, helps Dante Lane, 8, inside the robotics room at the Girls & Boys Club in Lawrenceville.
Recently, the PPS school board voted to delay in-person learning into April, and future discussions could keep them closed even longer due to what they cite as buildings and systems that are ill-equipped to avoid an outbreak.

PPS Superintendent Anthony Hamlet has insisted the district is ready for in-person school whenever the board decides to bring back students. According to the Pittsburgh Post-Gazette, the PPS school board, an independently elected body, cited “lack of clarity about preparedness to return amid the pandemic, transportation woes, and a strong push back from the teachers union that led to fears of staff shortages” as reasons they voted to delay reopening the schools for in-person classes.

Additionally, polling indicates that parents are largely happy with the pace of school reopening. According to a February national poll from Quinnipiac, 47% of Americans say the reopening of schools in their community is happening at about the right pace, while 27% want schools open sooner, and 18% say schools are opening too quickly.

Currently, teachers and other staff are not part of the first phase of vaccinations, though education groups in Pennsylvania have called on Gov. Tom Wolf to prioritize them if schools are to reopen. Pittsburgh Federation of Teachers president Nina Esposito-Visgitis told the Post-Gazette that vaccination concerns weren’t the sole reason the teachers’ union is hesitant about returning to in-person instruction, citing the lack of communication with the school board about a detailed plan as another factor.

In the end, when schools do eventually reopen, Abel-Palmieri believes school leaders, educational organizations, and community groups should use the time given to them by the pandemic to create a better, more equitable system for students. 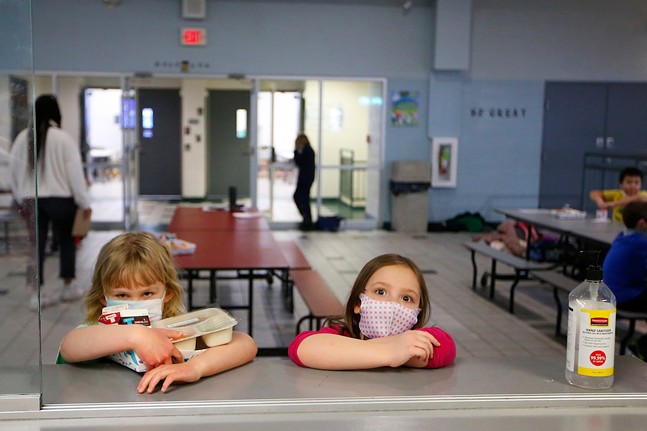 CP Photo: Jared Wickerham
June Radder (left), 6, and Cylvia Feigelstein (right), 6, wait in line for their meals at the Boys & Girls Club.
“Instead of reopening in the same old way we've always done it, which we know is broken, what might we do to move the needle to address these disparities we've seen in the past?” says Abel-Palmieri.

She also foresees that, once students are back in school, they will lose the valuable programs they had access to during the pandemic, which could be instrumental in helping them catch up. While Boys & Girls Clubs now has emergency funding to offer their learning hubs for free, Abel-Palmieri says that will go away when school buildings are reopened. As a result, she says any reopening plan should include a smooth transition where current support structures for students are still in place, as it may take awhile for families to bounce back from hardships caused by the pandemic.

Regardless of how and when schools reopen, PLC promises to continue its mission of demanding that PPS and other districts remain open about how they move forward. Until then, Carter says families should also feel free to reach out to the coalition for support.

“A lot of families don't even want help or act like they don't need it,” he says. “These parents are struggling. Many are single and already in poverty. Don't be ashamed to ask for help.”
© 2022 Pittsburgh City Paper