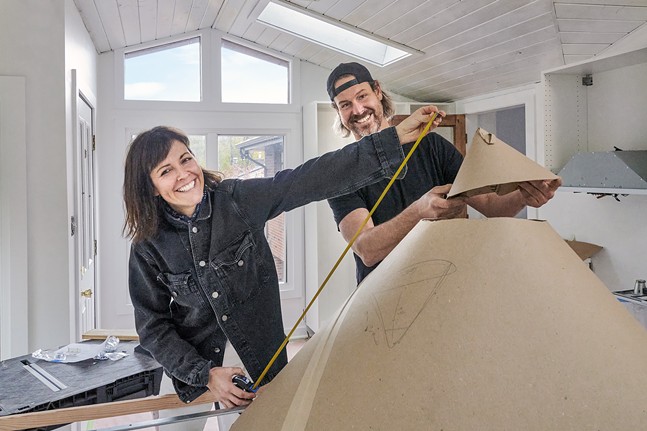 Photo: HGTV
Leanne and Steve Ford
The longer I'm in quarantine, the more I sink into a seemingly endless cycle of watching home design shows. There's the unsettling number of House Hunters episodes I've watched, the Architectural Digest celebrity home tours, the YouTube channel about tiny homes. I'm not particularly adept at home decor, and have no plans to buy a house in the near future, yet I just cannot stop watching other people touring houses much nicer and bigger than my apartment whose kitchen has the dimensions of a narrow hallway.

Enter Home Again with the Fords, a new HGTV home renovation show set in Pittsburgh (airs Tuesdays at 9 p.m.) and its surrounding areas, hosted by brother and sister design team Steve and Leanne Ford. (Yes, they are siblings. Yes, HGTV has an abundance of renovation shows hosted by a husband and wife duo. Yes, the vibes are a little confusing at times.) The Fords previously hosted a very similar show, Restored by the Fords, which was also based in Pittsburgh. The newest show is an hour instead of a half hour, and it has a more significant focus on the area and history of the place they're renovating.
The show premiered on Feb. 2, with the first episode set in Carnegie. The season has a seven-episode run, and according to TribLive, episodes will feature Fox Chapel, Squirrel Hill, Aspinwall, Franklin Park, and Dorseyville.

In the first episode, which is the only one I've seen, a couple living in a 100-year-old farm house, which has been in the family for several generations, want to renovate it for their parents, who are moving back in to the house after living in Nashville for years. The home also belongs to the family that owns Forsythe Miniature Golf, which has been around since 1942.

The whole concept of Home Again is helping people who have moved away from the Pittsburgh region to come back home, in line with the city's popular image as newly revived (which, of course, only benefits certain people, usually on the white and wealthy side of things. Many people who have left the city in recent years did so because they could no longer afford it.)

At first, I was worried that the Fords would wipe the farmhouse into too much of a clean slate, like many of these home renovation shows do, by putting all-white cabinets in an all-white kitchen with gray walls throughout the rest of the house. I think Big Design has been living under the tyranny of gray and pale colors for far too long. Leanne Ford's signature color is white, and she's known to use it heavily in her designs (she has a guide to picking white paint on her website), and is often wearing all-white outfits on the show. She has said this is because it makes other colors pop, but there aren't enough other colors used to do the popping.

Luckily, one of the homeowners, Vicki Sawyer, is a painter, and the Fords used her colorful, whimsical work to inspire the design of the home. This is where I got distracted while watching and fell into a hole looking at Sawyer's paintings. They showed one in Home Again, of a goat with vegetables piled on its head, and I had to know more.

On her website, Sawyer cites growing up in the Carnegie house, which was a working farm with a substantial chicken coop, as her inspiration for her paintings, which feature birds, rabbits, lambs, deer, and pigs, mixed with an array of produce, from watermelon to carrots to artichokes.

I stopped paying attention for at least 15 minutes because I was scrolling through Sawyer's website debating about whether I should buy a pillow or a painting. I had a $150 painting of a duck wearing a crown of scallions on its head in my online cart before I came to my senses (meaning that I realized if I'm going to buy an expensive painting, I should wait until I move apartments in a few months). (Yes, I did eat a medical weed pill before watching this.)

The end result of the Home Again makeover was, to my surprise, very cute. Again, I was prepared for everything to be "modern clean lines" and stainless steel and those gray fake wood laminate floors that are everywhere. But the Fords respected the age of the farmhouse, and its "character," as they love to say on HGTV shows. There was still a whole lot of white, but it was still a handsome little house.

And, at the end, Sawyer gave the fords each a painting, and I was jealous.
© 2023 Pittsburgh City Paper