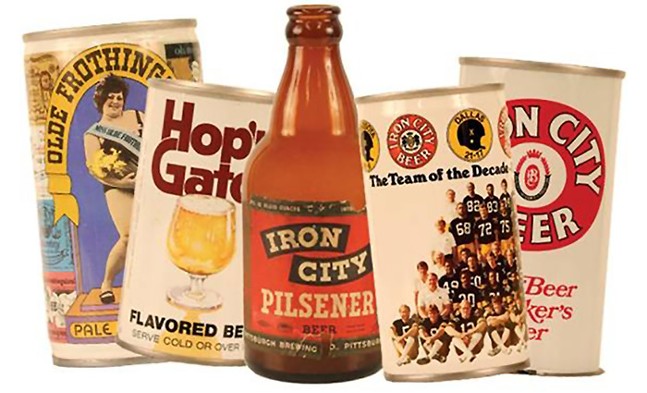 CP file photo: Heather Mull
Vintage Iron City cans and bottles housed in the Heinz History Center
When the Pittsburgh Brewing Company left Pittsburgh in 2009, the city was heartbroken. Makers of Iron City Beer, the brewery was synonymous with the blue-collar city that sprung it, and had been brewing lagers, pilsners, and ales at its Lawrenceville facility for more than 140 years. But after it was bought out in 2007, the brewing eventually stopped in Pittsburgh, and production moved to Latrobe in Westmoreland County.

Now, Iron City Beer is returning to Allegheny County. Not quite back to Pittsburgh, but up the Allegheny River, just about 22 minutes from Downtown in Creighton. On Feb. 3, Pittsburgh Brewing Company announced a plan to build a new brewery in the former Pittsburgh Glass Works plant, which is located along the river in northeastern Allegheny County.

According to the Pittsburgh Business Times, construction crews are already working on converting the large site into a brewery. The goal for the company is to bring more control back to production of beers like Iron City, I.C. Light, and Old German. For over a decade, Iron City beers were brewed by contract bases at the old Rolling Rock brewery site in Latrobe.

“While the brewery in Latrobe has been a tremendous facility to make all of our products, it will be very satisfying to be able to control our production again from start to finish,” said brewmaster Mike Carota in a statement.

The Business Times reports that Pittsburgh Brewing expects to start making beer at its new facility by 2022, and eventually to ramp up production close to its historic volume when it was brewing in Pittsburgh.

As for the former Iron City Beer site in Lawrenceville, it was recently closed on by the new owner of Pittsburgh Brewing, coal magnate Cliff Forest. A Pittsburgh Brewing spokesperson told the Business Times there are still plans to renovate the Lawrenceville brewery property on Liberty Avenue, including building a brewpub in the complex.

Some preliminary plans for the largely vacant site also include a big mixed-use development, including housing and retail, according to Postindustrial. The site is right next to Herron Avenue Station of the MLK East Busway.
© 2023 Pittsburgh City Paper