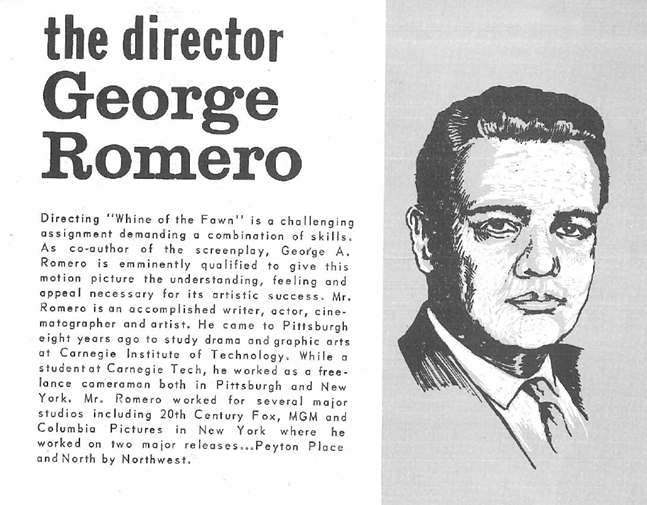 George A Romero Archival Collection. Pitt University Library Systems
Bio for unmade Romero film
It makes sense that the University of Pittsburgh would discover more than a few surprises as archivists make their way through an acquired collection of materials from the late George A. Romero. After all, Romero was instrumental in inventing a new type of horror genre and helping to usher in independent filmmaking by making the hit Night of the Living Dead in the Pittsburgh area on a low budget.

Pitt will reveal the latest bunch of Romero treasures on Tue., Feb 9 with a virtual discussion as part of the latest development of the George A. Romero Archival Collection.

Led by Horror Studies coordinator Ben Rubin and visiting researcher Adam Hart, the event will cover scripts, treatments, production documents, photos, videos, and more that promise to “change how we see the filmmaker behind Night of the Living Dead,” says a release. It will cover early versions of Night sequels, Dawn of the Dead, and Day of the Dead, as well as Romero's unmade projects.

Fans can also expect a look at his collaborations with horror author Stephen King, unseen photos from behind the scenes of Night of the Living Dead, shooting scripts used on set with Romero’s own handwritten notes and revisions, and more.

The latest unveiling comes from a mass of materials given to the school in 2019 by the George Romero Estate and the George A. Romero Foundation. Pitt has been working on making the archive accessible by gradually adding it to the University Library System as a major part of its Horror Studies Collection.

Hart says the collection is a testament to Romero's role as a groundbreaking filmmaker and as someone who gave “several generations of Pittsburgh filmmakers their first jobs in the industry,” as his sets were “more or less film school for a whole bunch of aspiring filmmakers from the region.”

“But that’s only a small part of the story,” says Hart. “He was an astonishingly prolific, hugely creative artist who never stopped writing. Working independently and working from Pittsburgh, getting a movie funded and made was never easy.”

He adds that the collection fills in the gaps when Romero wasn't filming for long stretches of time. When not on set, he was working on multiple drafts of scripts, coming up with short film treatments, and collaborating with friends or writers he admired.

“It’s not just a more complete portrait of Romero than we’ve ever had before, it will alter our understanding of him as an artist,” says Hart. “Reading through the unmade drafts I’ve started to see similarities with his finished films — many of which started off, by the way, as radically different projects.”

To illustrate this, Hart says he will talk about the early draft of Dawn of the Dead — the zombie epic shot in the Monroeville Mall — that includes “a mysterious stranger with one eye and telepathic powers over both zombies and humans,” as well as the version of Martin that Romero started before he decided to make it a vampire film. 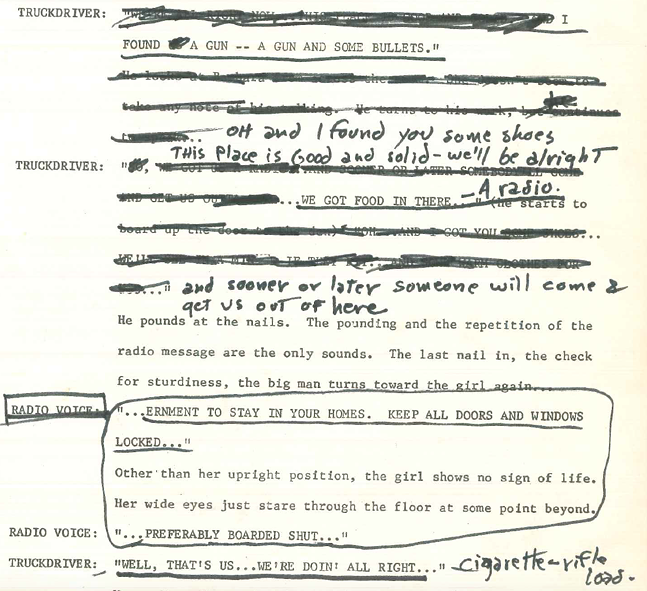 “I think that it will help us to understand him as a filmmaker who was continually trying to rethink what a horror movie can be and what it can do,” says Hart. “He was always finding ways for a monster movie to become that goofy comedy or searing social critique or tense drama or action movie or Western that he wanted to make."

Hart adds that Romero developed a superhero movie in the early 1980s with Jim Shooter, a Pittsburgh-born comic book publisher who served as editor in chief at Marvel and Valiant. He also wanted to do a Bigfoot movie starring Steelers’ Hall of Famer Franco Harris.

Even more unexpected, Romero worked on mounting a stage musical at Carnegie Mellon University that would be a “space rock sci-fi musical” adaptation of the opera Tales of Hoffman.

“He only got the chance to make two films outside of the horror genre, and by the end of his career, he was basically only able to make zombie movies,” says Hart. “He never really resented that, at least not publicly, but his ambitions and his interests were much, much broader than that.”

In addition to the discussion, Pitt will also host the premiere of George Romero & Pittsburgh: The Early Years, a student-produced documentary that explores “Romero’s early creative life in Pittsburgh, his connections to the University of Pittsburgh, his legacy as an artist and his historic casting of African-American actor and Pitt alumnus Duane Jones as the lead in the 1968 horror classic Night of the Living Dead.” A panel discussion moderated by Day of the Dead star Lori Cardille will follow the screening, taking place on Thu., Feb. 4.

Hart looks forward to illuminating what they have found in creating the George A. Romero Archival Collection, which is still an ongoing process.

“I cannot tell you how exciting it’s been going through all of it for the past year,” says Hart.It Came from the Archives! Unearthed treasures from the George A. Romero Archival Collection. 7-8 p.m. Tue., Feb. 9. Free. Registration required. Register at the Pitt Events website.
© 2022 Pittsburgh City Paper