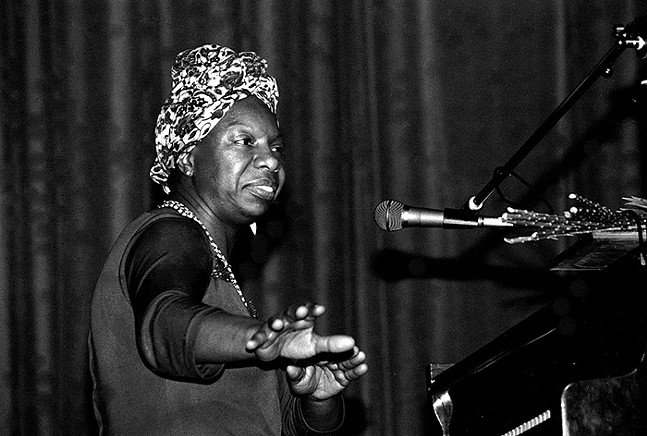 Photo: Teddyyy, Wiki Commons
The American singer Nina Simone in concert in Morlaix (Brittany, France) in May 1982.
The contributions Black Americans have made from politics to science to the arts and everything in between cannot be overstated. This, of course, applies to Pittsburgh as well, which has produced a number of Black innovators and pioneers.

The August Wilson African American Cultural Center will welcome a number of historians, artists, and scholars for Pittsburgh’s Black Art Scene: Past, Present & Future. The month-long retrospective will focus on “Pittsburgh’s role in the cultural lexicon and the art forms and artists that have contributed to the city’s historic Black arts scene,” according to a press release.

“Pittsburgh is the birthplace of some of the country's most acclaimed talent, and it continues to be home to a vibrant local arts scene and an incubator of exciting new voices,” says Janis Burley Wilson, president and CEO of AWAACC.

Burley Wilson adds that the Center is “dedicated to honoring the trailblazers of Pittsburgh’s arts scene while serving as a steward of its present and future creators,” which encompasses the Black History Month programming and creation of August Wilson: A Writer’s Landscape, a forthcoming exhibition dedicated to the Center's namesake.

The event kicks off on Thu., Feb. 4 with I Got Life: The Music of Nina Simone, a special edition of the center's virtual music series, AW Studio Sessions, focused on the legendary musician and activist Nina Simone. Hosted by jazz and soul legends Gerald Veasley and Carol Riddick, the pre-recorded show explores “four aspects of Ms. Simone’s songbook: quest, passion, fury and hope.” The show begins at 8 p.m. on Feb. 4. Tickets cost $12.

From there, Pittsburgh’s Black Art Scene: Past, Present & Future includes Mr. SOUL!, the first screening in the Black Bottom Film Festival virtual film series. The documentary looks at Ellis Haizlip, host of SOUL!, a public-television variety show that ran from 1968 to 1972 and is regarded as America's first “Black Tonight Show.”
There will also be three special events examining "three distinct phases of Pittsburgh’s cultural evolution," including a look at the Pittsburgh-based National Negro Opera House, the first African-American opera company in the country that ran for over 20 years until closing in 1962. The event features a 15-minute video and a conversation with Jonnet Solomon, who now owns the property and has been trying to raise money to restore and preserve it.

There will also be an interview with Mark Clayton Southers, founder and producing artistic director of the Pittsburgh Playwrights Theatre Company, and a virtual salon with photographer Ming Smith and a special performance by the young funk-jazz collective, Funky Fly Project.

The series begins on Thu., Feb. 11 with “The Bonds of Family and Legacy,” an exploration of the Black family. Presented in partnership with the National Underground Railroad Freedom Center, the event invites various scholars to discuss the significance and complexities of Black families through the lens of “history, literature, the visual arts, social policy, and the culture of the culinary arts.” The event takes place from 6-7 p.m. Admission is free but registration is required.

The Heinz History Center will also present “(Re)Making History: Memory, Mythmaking, and the Civil Rights Movement” as its seventh-annual Black History Month Lecture. The event features Dr. Hasan Jeffries, associate professor of history at Ohio State University and lead scholar for the renovation of the National Civil Rights Museum at the Lorraine Hotel in Memphis.

Jeffries will use movies, political cartoons, and other media to “interrogate leading myths about the African American fight for equality,” exploring how “popular misconceptions about the civil rights movement remake history, altering everything from the African American freedom struggle’s leadership, goals, tactics, and guiding philosophies, to the depth and breadth of the white opposition, including the form and function of racial terror.” The event takes place on Fri., Feb. 12 from 5:30-7 p.m. Admission is free but registration is required.

Other events include a From Slavery to Freedom Film Series screening, a series of educational programming for teachers and students, and a chance to check out the long-term, award-winning From Slavery to Freedom exhibit, which explores more than 250 years of African American history in Western Pa., from the “enslavement of Africans and its impact on the American economy, the history of the anti-slavery movement, the Underground Railroad, and the impact of 19th-century activism on the modern quest for civil and human rights in Pittsburgh.”

For more details and to register for events, visit heinzhistorycenter.org/events.

Discover Black voices in local comedy when Arcade Comedy Theater presents its first Black History Month Celebration. The event will include a virtual staged reading series and a stand-up comedy roast, as well as storytelling, improv, and sketch shows.

“Like many other arts organizations, Arcade is working to improve our impact in the community we serve,” says Arcade managing artistic director, Abby Fudor, in a press release. “Comedy is an art form with a long history of incredible Black artists and current powerhouses whose work is changing the industry. Pittsburgh is so fortunate to have hilarious Black comedians working here and Arcade is even luckier to be working with many this month as producers and performers.”

Other offerings include a virtual presentation of Live from the BBQ with comedian Miles Miller, a comedy roast of the United States produced by Brittany Alexis and featuring Black comics, and In the Black Sketchathon, a telethon-themed sketch comedy show.

“As one of the producers for Black History Month at Arcade Comedy Theater, I'm excited about and looking forward to putting a spotlight on some of the many Black creatives who live in Pittsburgh and the surrounding area,” says Ryan DeSanté Canty, who produced the celebration's staged readings and improv shows.