From January 13 through January 17, a dozen Manhattan venues hosted over 120 acts as part of the 12th annual NYC Winter Jazzfest. With a wristband serving as admission to all the events, it felt in some ways like a post-graduate school version of CMJ’s annual Music Marathon, with enthusiasts wearing out the pages of the program, trying to figure which band to catch at what time without missing a favorite who might be starting a half-hour later down the street, or perhaps a subway ride away.

This, then, is the story of one of them.

The New School hosted four stages all within blocks of one another, making at least part of the festival an easy journey. Their Tishman Auditorium could easily have been the place to park oneself for the duration of both Friday and Saturday nights. Both evenings showcased artists on ECM, the European jazz and classical label which also houses a number of American jazz artists. Friday night began with guitarist David Torn (who visited our fair city last spring). Alone onstage with a bank of effects racks and two pedal boards, he might make some people wonder why he spends so much time twiddling with his effects before playing. But the twiddling is part and parcel of his playing. Torn turned some knobs for five minutes before he even touched the neck of his guitar. What he conjured from his amp was an amazing ambient wash that literally sounded like outer space transmissions (a descriptor which I normally use metaphorically). As his set proceeded, he turned tuning into a melody, adding some country twang to the soundscape and creating backdrops which seemed to be simultaneously speeding up and slowing down. 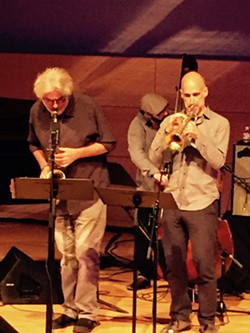 Drummer Dave King is probably best known for his trio the Bad Plus. But this year’s WJF artist-in-residence has also continued to play in other groups including the pre-BP trio Happy Apple, which also performed during the festival. I caught him behind the traps at New School’s Jazz Building with tenor saxophonist Chris Speed’s trio, rounded out by bassist Chris Tordini. Speed’s writing featured some strong grooves in even and uneven time signatures. He was also capable of soloing for about three solid minutes, developing one long original idea, as opposed to several choruses with some relation to one another. While they delivered a strong set, with King’s brushes laying down some taut accents, it made me wonder what New Yorkers would think of Pittsburgh’s Thoth Trio, who do the same thing with a tad more variety in the dynamics department.


Back at Tishman, percussionist Ches Smith, pianist Craig Taborn and violist Mat Maneri were blurring the line between free improvisation and chamber jazz. Understated moments, with Smith tapping cymbals or bowing his vibraphone, gave with to thunderous roars, with Taborn nearly being drown out by his bandmates. Then magically, simple themes would appear, giving the whole thing structure and perspective. (Look out for this trio in Pittsburgh in late February.) An interview Smith following their set meant that I missed a good chunk of Vijay Iyer’s set with his trio. The parts that weren’t missed were spellbinding, showcasing the group’s unique, slightly off-kilter cohesion and what sounded like a few new compositions.

Oscar Noreiga plays clarinets in Tim Berne’s Snakeoil group, but on Friday, he donned an alto saxophone and fronted his own quartet, in New School’s Glass Box Theater, an intimate room whose performers could be seen outside on West 13th Street. Inside, guitarist Brandon Seabrook, whose dark curly mop and black threads made him look more like a rockabilly ghost left from the CBGB days, peeled off angular licks that drummer Dan Weiss also played during the composed sections. Noreiga unleashed some obtuse solos that nevertheless swung hard. Hopefully this group will record soon. (Regretfully, I missed saxophonist Sharel Cassidy’s Elektra, a band made up of some of the strongest woman in modern jazz, which was playing upstairs.)

To get a big band together, it typically takes some major grant writing, or an institution in Lincoln Center, not to mention a repertoire that swings in the traditional Ellington/Basie mold. Enter bassist Michael Formanek, whose last two quartet albums on ECM have earned five-star ratings in DownBeat. (That superlative ranking is normally bestowed on little else besides historical releases by deceased icons.) For The Distance, his newest release, Formanek created Ensemble Kolossus, a 17-piece group consisting of A-list, forward-thinking improvisers, including trumpeter Kirk Knuffke, saxophonists Chris Speed and Loren Stillman, guitarist Mary Halvorson and trombonist Ben Gerstein. On Saturday night, they all added their voices to the eight-section piece “Exoskeleton,” which featured darkly colored ensemble passages, slinky grooves that rose from other sections, and a particularly delightful trombone solo in which Gerstein employed extended technique to squeeze out all manner of vocal and guttural sounds.

Drummer Jim Black always puts on a good show, with his free-flying arms creating as much of a visual component as they do a loose-limbed approach to rhythm and sound. Up at the 5th Floor Theater, his trio premiered “The Constant,” a suite commissioned by Chamber Music America. With Thomas Morgan on upright bass and Teddy Klausner on piano, this group performed one of this writer’s favorite sets of the whole festival. After a few songs it became clear that Klausner had rigged — or prepared — some of the piano strings with clips to make them sound more metallic and percussive. One moment the trio was into something that would be called funk if it hadn’t been so jagged, the next it was a ballad. Later on, Black switched from multi-directional tapping to a rock backbeat that kept adding an extra beat every few measures to throw you. Who says chamber music has to be staid and polite?

After all that modern excitement, it was time for a journey down memory lane. One block away, again on the New School campus, New Orleans pianist Henry Butler and trumpeter Steven Bernstein lead their Hot 9 group through music by Jelly Roll Morton and Fats Waller, from their album Viper’s Drag. Leave it to a band of “downtown” New Yorkers like Bernstein, trombonist Curtis Fowlkes and saxophonist/clarinetist Doug Wieselman to take this music off the shelf, blow away the dust and tear it up. The band also had a Pittsburgh connection: baritone and soprano saxophonist Erik Lawrence resided in the Steel City until very recently.

Tim Berne’s Snakeoil has recorded three albums for ECM but he brought a different group to Tishman Auditorium Saturday night. Known as Sideshow, it brings pianist Matt Mitchell from the previous group, along with bassist John Hébert, trumpeter Ralph Alessi and, once again, drummer Dan Weiss. The group played with a bit more aggression than Snakeoil, latching onto vicious riffs and some of Berne’s involved, oblong melodies. The rhythm section pushed hard, even when Weiss played with his hands. The opening sounds of Alessi’s own quartet made me want to stay put, but there was an intergalactic message happening down in the Village, so it was time to go underground.

Mike Shanley
Danny Thompson of Sun Ra Arkestra
For the directionally challenged, a two-subway ride can quickly become an odyssey, especially at 11:45 on a Saturday night. (The budget didn’t allow for a cab this late into the trip.) But just when you think the worst, someone looks out for you, in this case perhaps the deceased Saturn native who created the Sun Ra Arkestra. Making my way up the stairs of Judson Church in hopes of catching the last 15 minutes of said Arkestra, a theremin-like squeal beamed out over the myriad drums that were banging onstage. (It was actually an EWI, or electric wind instrument.) “They just started about 45 seconds ago,” a friend told me. Thanks for waiting, Sun Ra. And thanks, Judson Church, for, ironically, being one of the few places at Winter Jazzfest that had some booze for sale.

Unfortunately, the church’s high ceilings reduced the first half of the Arkestra’s set into mush. Baritone saxophonist Danny Thompson stuck the bell of horn right on the microphone, and I still couldn’t hear it. During “Space is the Place” it was hard to tell if the band was in sync with one another or not.

But did that deter them? Not on your life. As the set continued, it came close to sonic balance, stocked with sparkly outfits, French horn solos, dancing drummers, a harpist (!) and 91-year-old saxophonist/EWI player Marshall Allen up there leading the band, which played way past 1:00 a.m. And they didn’t want to stop, jumping offstage, continuing to sing and play “We Travel the Spaceways” as they walked the floor. Things couldn’t have ended better.

Earlier this week, New York Times jazz critic Nate Chinen tweeted, “I hear such incredible music at Winter Jazzfest, but all I think about is the incredible music I missed.” That may be true, but I’m too busy savoring the memories of what I saw to think about what else I could have seen.