McGinnis and crew capture, flawlessly, the desire for virgin territory

There is so much going on in The Mountain and the Bumblebee, at SPACE Gallery, that it’s difficult to know where to begin. The observer might find herself briefly rooted to the gallery floor, unsure how to proceed through an exhibition that collects video, audio, spoken and printed text, sculpture, painting, photography and poetry. All are autonomous pieces, each worthy in its own right, brought together to produce a single, singular work. Observing it all is such an adventure that even starting the journey might be daunting. But the only wrong direction is one that’s rushed, as a slow and steady pace is required to fully appreciate this monumental work.

The traveling exhibition is a production of KIPP Gallery at Indiana University of Pennsylvania. Its focus, generally, is the American landscape, from both a geographical and social perspective. Curated by Chris McGinnis, an assistant professor of art at IUP as well as KIPP’s director, it’s composed of pieces credited to individuals as well as collaborative works. The scope, like the American landscape itself, is vast, sweeping, sometimes majestic and sometimes terrible, consistently impressive (both positively and negatively) and always affecting.

The works most immediately commanding of attention are those by Chele Isaac and BA Harrington, in part because they demand it physically. The largest single work in The Mountain and the Bumblebee is “Mo Ho (the horses died, but the wagons rolled on),” a plywood and mixed-media cart dominating the midsection of the gallery, the unfinished plywood joined with carved and painted rungs, designed for motion but stationary, filled with possibility but currently impotent. (A version of the work was recently exhibited at Pittsburgh Center for the Arts.) In one gallery window rests a smaller cart, and in another sit coffin-like crates, seemingly unadorned and plain but with monitors with looping video inside. A kneeler like those found in houses of worship holds a screen with segments of rodeo, with long shots of cowboys and close-ups of cows. “American Quartet,” the loudest piece in the exhibition, with sound created by Jack Kellogg, is a four-channel video by Isaac (and which was also recently seen at the PCA). The video follows a man toting a battered suitcase across deserts equally abused, littered with stained mattresses and plastic tumbleweeds, empty bottles and overflowing trash bags. The scene is disappointing and disquieting but interrupted by skies and sands of such majesty they restore hope. In the show’s other video work, Josh Reiman’s “A Brief Inquiry,” rugged characters stride across equally rugged environs, investigating the concept of “the sublime,” along with its misinterpretation and corruption. 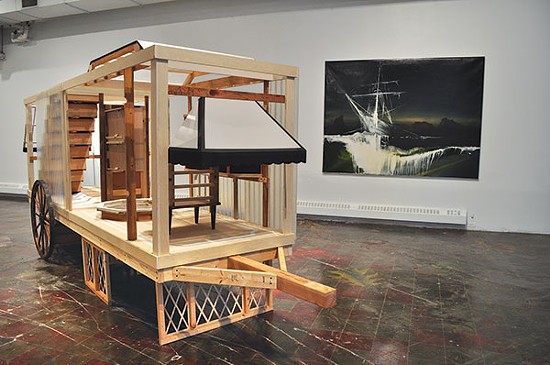 Photo courtesy of SPACE
“Mo Ho (the horses died but the wagon rolled on)” (foreground), a work by Chele Isaac and BA Harrington in The Mountain and the Bumble Bee

Works by McGinnis incorporate graphite as media with gorgeous results. Solo pieces include compact thick slabs of the mineral, dense and glistening, the jewel-toned paper underfacing them reflecting off the white pedestals over which they hover; abstract ink and graphite drawings of the natural world, sometimes beset by its manmade counterpart, are vivid and filled with movement. McGinnis partners with Meg Shevenock and Todd Davis on text-based, wall-mounted works that start up high and stagger downward to disintegrate onto the floor. Heather Green’s “Pinpoints of Perception” gathers numerous tiny portraits of bees painted from specimens borrowed from university collections, supplemented with a key to the provenance of each. Several paintings by Erika Osborne, realistic documentations of grand vistas, might make your heart beat faster, as do Gwyneth Scally’s imaginative oils. Matthew Conboy’s archival prints are a fascinating study, via census, of population movement and concentration, factually documenting how unexplored terrain becomes overrun. Poems written and spoken by Rick Barot, Robin Clarke, Todd Davis and Wes Dunning resonate from both an old-time radio on a pedestal and overhead speakers, ripe and rich with lush, visceral imagery.

The exhibition’s title references an encounter of the geologist and surveyor John C. Fremont, who led an exploration of the Rocky Mountain Territory in 1842. In his journal he wrote of finding a bumblebee at an unexpected altitude, and his perception that it must have been a trailblazer of the apian world. Fremont implicitly defines himself as the same for his own species, his curious bravery and brave curiosity leading him to heights previously unscaled.

The work Fremont inspires here hits a summit of its own, one intriguingly confronting our desire to seek and conquer untouched regions, and the consequence that our presence has on such untrampled ground. McGinnis and crew capture, flawlessly, the desire for virgin territory, the quest for the new, and the conundrum of whether we can discover it without destroying it.