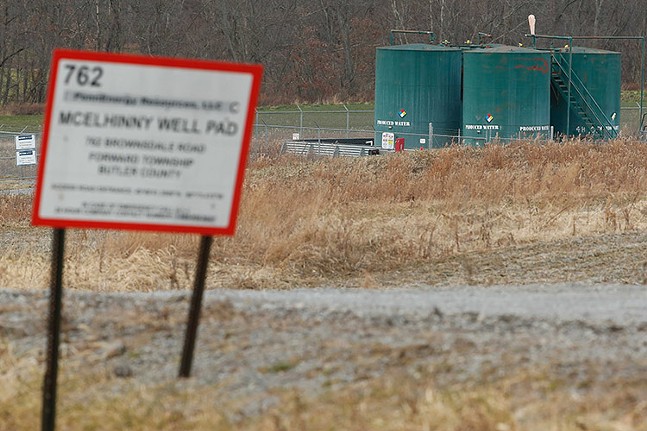 CP photo: Jared Wickerham
A horizontal well for a natural gas drilling site in Butler County
On Jan. 24, oil-and-gas giant Energy Transfer shelled out some serious money to re-run one of their commercials during the NFL conference championship games.

The commercial implies that oil and natural gas lines are necessary to keep tanker trucks off of roads and tanker train cars off of railways, “just to meet our energy needs.” The commercial posits underground pipelines as bucolic havens, and railroads and highways as dangerous.

Highways are dangerous, and pipelines do have far fewer incidents compared to America’s roads. But any notion that pipelines are solely peaceful and perfectly safe comes tumbling down when confronted with reality.

According to ProPublica, pipeline incidents have killed more than 500 people, injured over 4,000, and cost nearly $7 billion in property damages between 1986 and 2012. There are roughly 3 million miles of pipeline in the U.S. Between 2010 and 2019, there were 329 pipeline explosions and more than $5.3 billion in damages, according to the FracTracker Alliance.

In 2018, less than two weeks after the initial airing of its commercial, an Energy Transfer pipeline exploded in Beaver County after only being in service for one week due to a landslide. It burned one house to the ground and several vehicles. No one was injured. (Natural gas drilling, aka fracking, is done all across Southwestern Pennsylvania, although fracking production has slowed as of late.)

According to the Pennsylvania Public Utility Commission, the Energy Transfer pipeline was constructed in an area that has extremely high risks for landslides. Since the explosion, the state Department of Environmental protection has levied more than 600 violations against the Revolution pipeline, as it is so called.

Another claim made by the Energy Transfer commercial is that U.S. roads and railways would be clogged if pipelines were eliminated. Some politicians and environmentalists are more concerned with blocking new pipelines than ripping out ones currently in use. And many major pipeline proposals have recently either been abandoned by energy companies, or blocked by governments.

Stephanie Wein of the statewide environmental group PennEnvironment says the Energy Transfer commercial is an attempt to boost the profile of fossil fuels when they are becoming increasingly less popular. She notes that pipelines do leak and cause pollution, like in Marsh Creek Lake in Chester County last year, but says that overall, Pennsylvanians should be wary of efforts by fossil-fuel companies to market pipelines since they could take the country in the wrong direction.

“In 2020, we should not be building more fossil-fuel infrastructure,” says Wein. "It is a further investment in the direction we need to move away from. Every pipeline that we build is just doubling down in the wrong direction.”

Public sentiment is also not in the favor of fossil-fuel infrastructure. Polls show that large majorities of Pennsylvanians and Americans want the government to take more action to combat climate change.

“A lot of Pennsylvanians see through it, but there is a reason they are going back to this well,” says Wein of Energy Transfer’s commercial. “They see public sentiment is turning against them. … Demand, the price for gas, has been unstable, it is boom and bust. We have seen that fossil fuel is an unstable bet.” 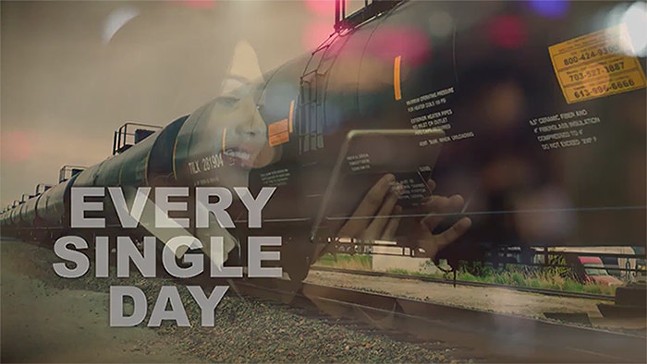 Screenshot from Energy Transfer's commercial
Finally, the last dubious claim made in the Energy Transfer commercial is that pipelines are necessary to meet our energy needs. Pipelines do transmit natural gas and oil that Americans use to heat homes, run power plants, and drive vehicles, but America has also become a major natural gas and oil exporter.

The U.S. also exports large quantities of oil, but we are still importing large amounts, too. Oil still also makes a large chunk of our energy needs, particularly for transportation.

Wein also adds that natural gas pipelines, especially new ones, are not just to supply power plants, they are also for supplying petrochemical facilities to create plastics. Wein notes that while creating energy at home is a popular strategy, creating plastic is not. Global plastic demand is shrinking, and Americans are supporting anti-plastic policies across the country.

“A lot of this is not just to power our home. It is to make cheap plastic,” says Wein. “And to turn the Ohio River Valley into a plastics hub.”
© 2022 Pittsburgh City Paper