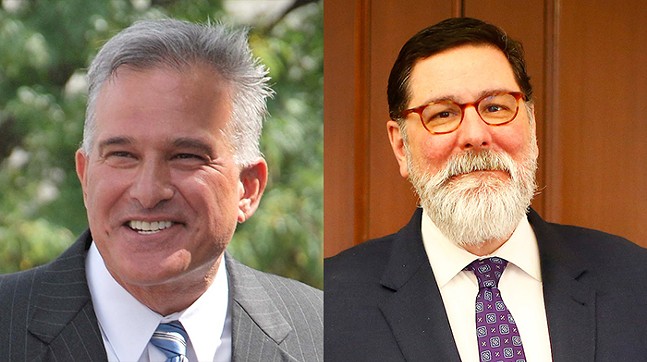 Stephen Zappala (left) and Bill Peduto (right)
The chaos unfolding at the U.S. Capitol is unprecedented in modern times, and is clearly taking center stage of national politics. But Pittsburgh’s local politics is having a little bit of its own political chaos unfolding this week as well.

On Fri., Jan. 8, Allegheny County District Attorney Stephen Zappala issued a statement saying he is now charging 24 people with summary offenses in relation to events connected to the Black Lives Matter protests that occurred in Pittsburgh on May 30 and June 1 last year. Those 24 summary charges, equivalent to a traffic ticket as noted by Zappala, stem from 61 charges that Zappala dropped last summer. Both protests on May 30 and June 1 also included the police firing tear gas, bean bags, and pepper spray at protesters.

Zappala said in a statement to WESA’s Katie Blackley that while serious offenders who caused property damage and injuries during the protests were charged criminally, the “Pittsburgh Police filed numerous charges for the crime of Failure to Disperse, that [Zappala] determined were badly lacking evidentiary sufficiency.” So he ordered those charges withdrawn last year, but today he is reinstating some of those charges, and is saying that the Pittsburgh Police presented him evidence to do so “at the direction of” Pittsburgh Mayor Peduto.


The DA's office is going to be refiling "certain cases in connection with the marches that took place in May and June of last year." Statement says "evidence for the refiling" was presented "at the direction of Mayor Peduto." pic.twitter.com/9sEQ1AsCZW

When this statement was tweeted out by Blackley, it spread quickly with many criticizing Peduto. But when Peduto’s office was reached, it fervently denied the claims, and said that Zappala was spreading “disinformation” and that Peduto doesn’t play a role in assigning officers orders.

"The District Attorney's Office is presenting disinformation," reads a statement from Peduto’s office. “The Pittsburgh Police investigated potential criminal activity as is their responsibility. They presented that information to the DA's Office as requested. The DA's office makes decisions on what charges to file.”


For those following this thread: the Mayor's office responded to my request for comment. "The District Attorney's Office is presenting disinformation," it says, adding that the Mayor has no role in investigations, evidence or filing charges "in this case or any other case ever." pic.twitter.com/NfG7SZqsiv

Pennsylvania mayors are typically in charge of municipal police departments, but they don’t play a hands-on role in criminal investigations or really any kind of day-to-day policing decisions. In fact, Peduto once scolded officers during an anti-Trump march, and he was quickly criticized by police union brass.

According to WESA, Zappala’s office said it had nothing to add when asked why its statement mentioned Peduto at all.

Peduto is up for re-election this year and has said he intends to run. Zappala and Peduto have a history of disagreements over gun-control policies and, in 2017, the district attorney said their relationship had become strained after he and Peduto disagreed over the handling of a police shooting of a Pittsburgh homeowner.

Some on social media have questioned Zappala’s motives for reinstating the charges and for including Peduto in the statement. Former DA candidate and current Common Pleas Judge candidate Lisa Middleman hinted some displeasure on Twitter with the decision to re-file charges against protesters, as many were her clients.
© 2022 Pittsburgh City Paper