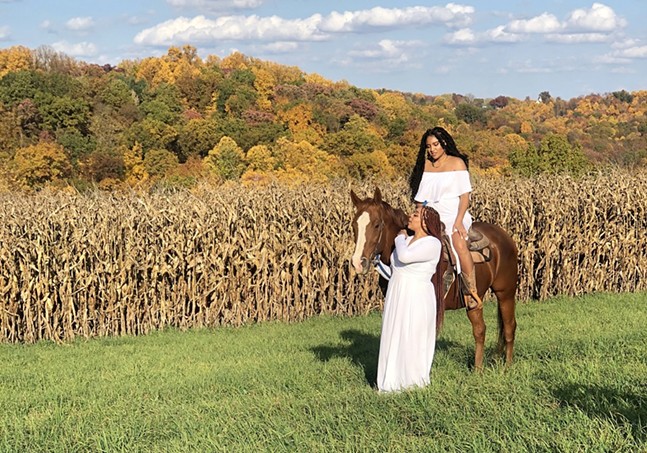 Photo: Courtesy of INEZ
INEZ and Clara Kent behind the scenes of the "Clouds" music video
Watching the music video for “Clouds,” a track from Voicemails & Conversations, the 2019 debut album from Pittsburgh R&B and soul act INEZ, is a welcome escape in the midst of COVID-19. Released in late December, the work features INEZ — real name Danielle Walker — and collaborator Clara Kent draped in white, lounging in an open field, with a clear, blue sky above. It's dreamlike and sumptuous, showing the two women donning highly stylized hair and makeup, dancing around a fire pit under the moon, riding horses, and posing in a chic dining room filled with flowers and candles.

The impressive production values deceive the 14 months of work put into the video, a DIY effort executed by INEZ and a group of fellow creatives, family, and friends.

“We were the PAs, we were the drivers,” says INEZ. “Between our little small circle, we were just knocking it out, getting it done, getting the shots we needed.”

The concept for the video was germinating even before “Clouds,” a song produced by Benji. and featuring Kent, was even finished. INEZ says she initially wanted it to be “two beautiful Black women in nature."

“I wanted to show a more ethereal, lighter, gentle side of me,” says INEZ. “It doesn't come naturally.”
She met director and editor Matt Palichat in September 2019 while working with the Empty Space Project, a digital media platform Palichat co-founded.

“I'm very particular about what I look like and the things I put out into the world creatively,” says INEZ. “There was something about him that I just loved.”

She then recruited Bradley L. Hill, who she had met during a fashion show, to serve as creative director. "He took my thoughts and whipped each location into a complete aesthetic," says INEZ, adding that he took on multiple roles, acting as "part production manager, part stylist, part designer" and "part director."

She describes how HIll "adjusted and designed the details for the shots down to wardrobe, flower placement, and candles," all while coaching her and Kent through movement and poses.

Her cousin, Roxy Lillard, as well as Hill and Mia Marshall, one of the three women behind the podcast Girls Running Shit, worked on hair and makeup.

In terms of procuring horses, she reached out to her friend Courtney Shrewsbury, an experienced rider who was boarding horses at a farm north of Pittsburgh. “She had been trying to get me to ride a horse for years, and I was like, 'Let's just do it!'” says INEZ.

But, like with any production, issues arose, the most prominent one being the COVID-19 pandemic that hit during pre-production planning.

They also needed funding. INEZ hesitated launching a crowdfunding campaign, concerned that asking for donations would seem inappropriate during a crisis when many people were struggling. She says her sister finally convinced her to move forward with an Indiegogo, which generated a little over $3,100.

INEZ also resorted to some creative methods of getting what she needed, including bartering with Shrewsbury. INEZ says she agreed to record some work by Shrewsbury, a singer in her own right, for access to the horses.

“She has horses. I'm an engineer, I have music,” says INEZ. “We just swapped.”

Even during the shoot, which took place over two days in October 2020, they had to contend with a few unforeseen problems.

“The horses were being assholes,” INEZ laughs. “Everyone's like, 'You guys look great,' and I'm like, several traumatic things happened when we were shooting with the horses.”

She recalls how, at one point, her horse took off with her, and, as she puts it, almost ran her into a barn wall.

“Everyone was like, 'INEZ, you look great, you know how to control your horse!' They think I'm having fun,” says INEZ. “I thought, this is how I go out. It was the scariest thing.”

INEZ also worried how the strain of shooting with the animals would affect Kent, who has been dealing with serious health issues. According to a GoFundMe page to help pay for her medical costs, the singer was diagnosed with chronic hemolytic anemia, a condition that affects the red blood cells, and suffers from bone pain. INEZ made sure Palichat knew that Kent physically could not keep getting on and off her horse.

“Her body can't take it,” says INEZ.
click to enlarge 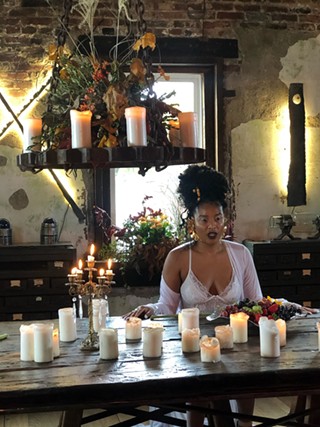 Photo: Courtesy of INEZ
Clara Kent on the set of the "Clouds" music video


Still, horses had been a part of her vision from the beginning, and she saw them as playing an important part not only visually, but symbolically.

“You don't realize how beautiful, large, and crazy these creatures are, and how you could die on one of these things,” says INEZ. “But also, it's just a really powerful thing to be a human on a horse, especially as a Black person with the history of our people in this country.”

Black Americans have a complicated relationship with horses, as the animals have long been used as tools of oppression, including by police. This has been flipped recently as powerful images of Black protesters taking to horseback for marches against police brutality have circulated on social media.

And though Black Americans do have a rich history as riders, including as cowboys, jockeys, and in other roles, much of that relationship has been erased or whitewashed. Coincidentally, the Silver Eye Center for Photography recently highlighted this with the exhibition Delta Hill Riders, an ongoing series by photographer Rory Doyle that “explores the subculture of African American cowboys and cowgirls in the rural Mississippi Delta.”

Horse incidents aside, INEZ says that day of shooting in an open field out in the country, especially after months of being shut in by the pandemic, was “so cathartic and peaceful.”

“It was a good day creatively, and a really good day for all of our mental health,” she adds.

INEZ believes the video, now available to view on YouTube, serves as a “really beautiful testament of staying patient and believing in the people around you.” It also shows that it's possible to make a high-quality music video with few resources.

“You don't need a major label, you don't need thousands of dollars,” says INEZ. “You just need people who are assured in their gifts and who believe in each other ... To see what people from Pittsburgh were able to put together, I still look at it like, we did that, man!”
© 2022 Pittsburgh City Paper