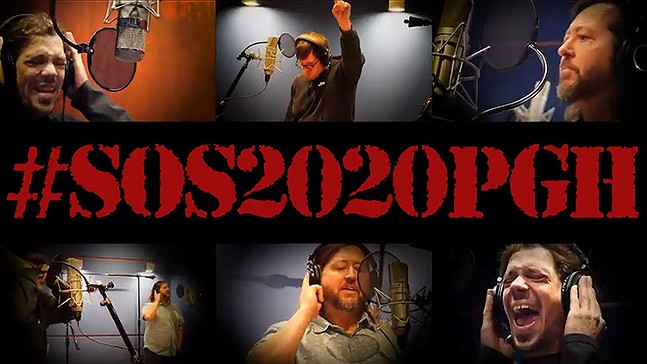 Screenshot from the SOS 2020 promo video

Since the onset of the coronavirus pandemic, the Pittsburgh music community has been shouting SOS — Save Our Stages. Musicians and venues alike rallied to bring awareness to the struggling live entertainment industry and to push the Save Our Stages Act, which if passed, would give venues across the U.S. funds to help them stay afloat while their doors remained shuttered. The call for help has come in multiple forms, from T-shirt fundraisers to coffee blends, to BBQ dinners, and most recently, a song.

"SOS 2020" is set to drop Fri., Jan. 8, and features over 60 Pittsburgh musicians and 27 bands. The song was recorded to raise awareness and money, and incite action to benefit Pittsburgh’s music venues.

"'SOS 2020' is intended to share the sense of frustration and concern I have for all Pittsburgh music venues, performers, promoters, and support staff directly affected by this pandemic," says Eric Rodger, lead guitarist of Royal Honey, who wrote the song and spearheaded the project. "I wanted to do something that put into action a way to help people now."

While the Save Our Stages Act was passed Mon., Dec. 21 as part of the COVID-relief omnibus bill, it could be weeks, even months before the funding begins to disperse. And the effects of a local shuddered live venue industry have already begun — nearly ten Pittsburgh venues closed in 2020, and 90% of venue owners suggested they "run the risk of significant financial hardship or closure in the coming months," according to a press release.

"We know there are many needs in the city right now for relief, we just want to ensure that the talented musicians and hardworking venue owners and their staffs are taken care of — now and in the future," says Rodger. "We’re family."

Recorded at The Vault Recording Studio, "SOS 2020" features an eclectic mix of both novice and veteran Pittsburgh musicians, such as members of Rusted Root, Murder for Girls, Chip & The Charge Ups, The Cheats, and more. See the full list of collaborators below.