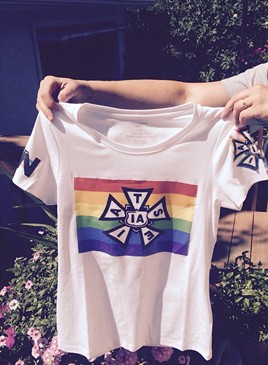 Photo courtesy of Shawn Foyle
IATSE's LGBT Pride t-shirt
This week City Paper reported about the apparent lack of progress with the Delta Foundation since the protests at Pittsburgh Pride by smaller, local LGBT groups. Protests were sparked by the selection of Iggy Azalea as headliner (the rapper had a history on social media of making comments that many felt were racist or homophobic), but protesters felt the issues went beyond that (Azelea later dropped out and was replaced by Nick Jonas). Demonstrators demanded more inclusive practices at Delta, particularly the participation of trans and people of color in Pride.

But another, less-reported group also engaged in the protests, calling out Delta for another issue: the exclusion of union stagehands at Delta events, particularly Pride.

Shawn Foyle of the International Alliance of Theatrical Stage Employees (IATSE) Local 3 says he has been reaching out to Delta for years trying to convince them to hire union stagehands for their events. Foyle says that union stagehands should be considered for Pride because it is a large event held on public land and because labor unions have historically been allies to LGBT organizations.

Foyle says that despite a “cordial” meeting in April 2012, IATSE has not spoken with Van Horn or anyone at Delta since. “We don’t have a relationship,” he says.

Since the initial 2012 meeting, Foyle says he has written multiple letters and emails requesting a follow-up discussion on the possibility of including up to four union stagehands for Pride events. After receiving no response year after year, IATSE joined in on the 2015 Pride protests and handed out leaflets detailing their frustration.

Since their protest, there has appeared to be some falling out between Delta and some of its labor support. Adanjesus Marin of SEIU Healthcare Pennsylvania says SEIU dropped out of marching in the 2015 Pride parade and barred Delta from marching with SEIU in Pittsburgh’s Labor Day parade after he learned Delta had been ignoring IATSE.

“We [at SEIU] decided to not march in the Pride parade after Delta turned its back on labor,” says Marin. “This is frustrating because Delta has been supportive of labor for years before this.” (Delta marched in the 2013 and 2014 Labor Day parade with SEIU.)

Marin, who is also the co-chair of LGBT union organization Pride at Work, says that SEIU tried to contact Delta with a letter about the IATSE issue before Pride, but Delta president Gary Van Horn ignored the letter. This is when SEIU decided to pull out of the Parade and to discontinue donations to Delta, Marin says.

“The fact is that [Delta] spends tens of thousands of dollars to bring in high-end entertainment,” says Marin. “They should be able to pay a living wage to the people who set up the stage. It would be a simple fix. we are talking about less than a handful of people.”

Foyle says that other IATSE unions march in Pride parades in places like Toronto and Portland and that IATSE Local 3 would be happy to march in the Pittsburgh Pride and donate to Delta, but not under the climate that currently exists.

Delta spokesperson Christine Bryan told CP in an email that Delta does not hire stagehands for their events but instead hires contractors to set stages, lighting and sound equipment. “We have asked [IATSE] to provide us with names of union shops in Pittsburgh that can provide these services and have been told that there are none,” wrote Bryan in an email.

Foyle says the response does not truly address the stagehand issue. He says contractors don’t usually have union stagehands as full-time staffers and that stagehands are hired as needed to assist contractors in preparing the stage and equipment for entertainment events.

Foyle says if experienced stagehands are not hired, then the contractors either put up the stage themselves or use “whatever help is necessary” to put up the equipment. Foyle says in the case of Pride, this extra help is usually volunteers, which can lead to potential problems.

“They don’t want to engage local people who actually do this for a living,” says Foyle. “It is easier and cheaper for Delta to pass the buck.”

Foyle also points out that if volunteers get hurt when helping to put up stages, they typically do not have any legal protections.

Bryan says that recently there have been attempts to improve communications between the feuding organizations. She says that Pittsburgh City Councilman Dan Gilman set up a meeting between Delta and IATSE, but the union cancelled the meeting.

Foyle says IATSE turned down the meeting because they had still not received a direct response from Delta after writing to them around Labor Day, and so they were skeptical of anything productive occurring at the sit down.

“We don’t believe that anything constructive would come out of this,” says Foyle. “We can read between the lines. The sit down was not happening for the right reasons.”

Foyle says IATSE would be willing to start discussions with Delta when the large LGBT nonprofit shows a desire to use some union stagehands for one of their events.

“This is what we do, and we do it right here in the Cultural District,” he says. “We support [LGBT] efforts. It would be nice if [Delta] included us.”