CP Photo: Jared Wickerham
1Hood Director of Policy and Advocacy Miracle Jones
During the past several months of the pandemic, local artist and activist coalition 1Hood Power has been hosting what they call “Power Hours'': in-depth conversations with political and social leaders about the current climate in Pittsburgh and beyond. Miracle Jones, 1Hood’s Director of Policy and Advocacy, has been a key player and moderator during these weekly sessions on Facebook and YouTube. From covering World Aids Day to sitting down with political activist Dr. Cornel West, 1Hood has shown a commitment to diversity of thought and perspective, exposing a wide audience to information they wouldn’t have otherwise known.

Pittsburgh has been a site of political change over the last few election cycles, with an injection of youth and new vision in seats such as State Reps. Sara Innamorato and Summer Lee, both first elected in 2018 and backed by the Democratic Socialists of America. Lee was also the first Black woman elected to represent Southwestern Pa. in the state legislature. Despite the strides that have been made in these areas, Jones, who considers herself a queer Black feminist with left-leaning politics, talked with Pittsburgh City Paper about where she saw current political parties lacking in their outreach to constituents during the recent election.

“[They are lacking] in cultural competency, lived experiences, I think a lot of youth, a lot of engagement about what it means to be working class, what it means to be in the gig economy, what it means to have debt," Jones says. "There was a meme going around recently, it was talking about how all of us born in the ‘80s, we've survived. I'm just turning 33. We have survived 9/11, Enron, multiple recessions, the financial crises, things that a lot of prior generations did not. This on top of war and a global pandemic.”

Jones emphasizes that many of our current political leaders do not understand what it means to be working class, which has been highlighted in the recent debate over a second stimulus bill and the amount that Americans should receive. The landscape that we categorize as “politics” is vast and reaching, so 1Hood sought out to cover a wide variety of topics with these Power Hours.

What was the driving force behind starting these conversations?
We started the 1Hood Power Hour because we noticed that a lot of conversations were getting left out. It seemed like a lot of politicians and pundits were talking at people, but not including people's lived experiences and also not including resources and support for people. Some of the reasons we launched were that we could tell people where to go if they needed to file for eviction protection, if they needed to go and get mental health screenings and support, if they wanted to research different laws and legislation. We wanted a place for people, not necessarily an echo chamber, but a place for people to go and get information to have conversations that really weren't being had.

A lot of newsrooms are closing down and corporations are taking over. As a result of that shift, a lot of conversations are being left on the table. So we did try to bring more people to the table that just traditionally weren't there.

Do you think you were successful in your endeavors to bring these things to light?
Yes, a lot of people have been reaching out to us and thanking us for having different topics, often it was the first time they've heard from different organizers and different organizations. So I think we were really successful. I know in the next year, we're trying to delve more into conversations, but there was a limit because you can't pay for press. So people have to volunteer their time to come on the shows. It really was an endeavor of love and passion, but that still exhibits a little bit of privilege for people that are able to come on and participate. So we are just trying to think about how we can be more proactive, even during a global pandemic, featuring more stories and letting people know what's going on and how they can get involved.

Many people expressed that they didn't use Facebook anymore because of privacy reasons, and so we moved over to YouTube. So we're launching that, getting that back off the ground, getting a website next year. We're trying to make things more accessible and have more stories. Participants were saying that this was the first time that they saw queer people, the first time they saw trans people, the first time they heard from an immigrant on the show, and that's very unfortunate. But I think it just shows the vacuum that's there in the media and how a lot of people just need more information to access and opportunities to share their stories. 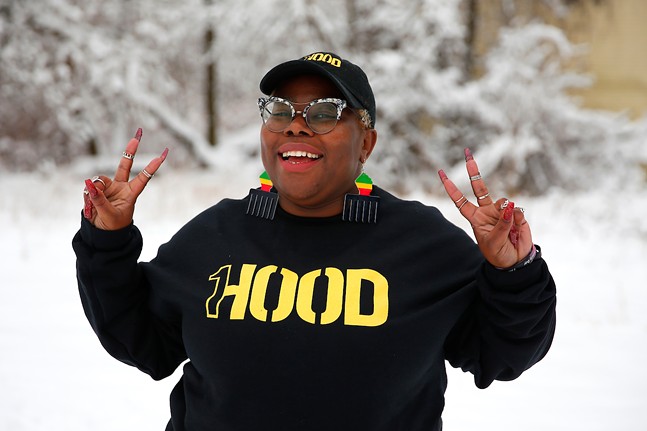 CP Photo: Jared Wickerham
1Hood Director of Policy and Advocacy Miracle Jones
What did you expect to learn going into this project versus what you learned as an outcome?
I think I just expected to have various community conversations and talk more about Pittsburgh politics. But I think that what I learned was just about the resilience of people and what they are going through. We had people texting us, emailing us, and people in the chat asking questions because there was a real hunger and thirst for information. I personally wasn't aware of the larger newsroom crisis that was going on. I learned that a lot of government agencies really do not know how to reach people, and do not know how to engage people. They don't know how to talk to people. The reason I mention eviction so much is that it's such a looming crisis.

Now we're learning that all of this funding was basically wasted. People really did not know how to apply for some of these programs. We had people from The Department of Human Services come on and walk people through applying for some of the rental relief. That was the first time that people had even heard about these programs. So you've had people even as far as Erie and Chester County say, “You know, we watched the show and this is how we learned about services.” I think that was a big thing for me — maybe the biggest lesson — and one of the driving forces of why we keep having the show going on.

Where do you see the future of these talks going?
Yes, I'm so very excited. We're continuing on, the future right now is still going to be virtual. We do have a three-year plan. Once COVID is more controlled, we plan to do these all around the county and all around the commonwealth, and to make them more engaging and interactive so that people are able to be polled about various issues and can learn a lot more. We do want to make these a lot more inclusive. So one of the things we're looking at right now is trying to get funding to have an ASL interpreter. A couple of people have told us that the closed captioning gets it wrong sometimes. So we're trying to find ways and support to make them more accessible in that regard. A couple of people are supposed to be sending us some resources. So if anybody has resources about funding to hire full-time ASL interpreters, please reach out to us.

In addition to making things more accessible, we want to have more people, more youth, and more underrepresented individuals come on the show. We'll have different takeovers of the 1Hood Power Hour by different people, and hopefully be an international, global show for news and to have people, the global majority, come and build together. I love the fact that our platform is bringing different intersections together and people are showing up and organizing and volunteering at places that they wouldn't have before. So we're excited. We're going to have a couple of YouTube specific platforms that are going to involve things like food justice and community organizing.
© 2022 Pittsburgh City Paper