Just three days remain for this exhibit that combines art history and a slice of mid-century local historical interest.

Philip Pearlstein's "String Quartet" (c. 1948-49)
Pearlstein, Warhol, Cantor: From Pittsburgh to New York spotlights the work these three artists did while growing up and training in Pittsburgh starting in the 1940s, and through the late ‘50s, by which time they were all living in Manhattan.

While Warhol afficionados will know Andy’s juvenalia on display here – like his infamous Carnegie Tech self-portrait “Nosepicker II” (1948) – the exhibit is also a unique chance to see work from the formative years of Philip Pearlstein, a renowned painter in his own right. Pearlstein’s sketches from his World War II military serivce, such as one of German POWs in Germany, for instance, are intriguing.

Of special interest to locals, however, are these artists’ student renderings of Pittsburgh scenes and landmarks. Pearlstein, for example, offers takes on the Carnegie Museum of Natural History, the long-vanished Duquesne Gardens and Carnegie Tech landmarks, as well as his painting “Pittsburgh Streetcar.” Also exhibited are his and Warhol’s dueling takes on what appears to be the same Carnegie Music Hall concert (rendered from nearly the
click to enlarge 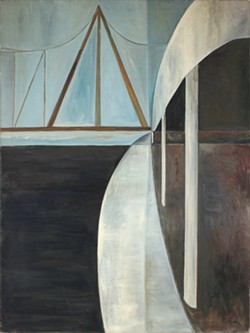 Dorothy Cantor's untitled rendering of FDR Drive (1951-52)
same vantage point). These are fascinating glimpses of the city nearly 70 years ago.

Still, perhaps the biggest revelations artistically are works by Dorothy Cantor, who after they moved to New York married Pearlstein and gave up her career to raise their family. On display for the first time are her fine abstract drawings and paintings, most of them depicting Manhattan cityscapes.

Here’s Nadine Wasserman’s review of the show for CP.

The Andy Warhol Museum is located at 117 Sandusky St., on the North Side. Pearlstein, Warhol, Cantor runs through Sunday.