At a press conference on Aug. 28  in Schenley Plaza, workers at Conflict Kitchen voted to unionize, forming a 15-member union of restaurant staff members. Workers at the counter-service restaurant, owned by Carnegie Mellon University (CMU), join CulinArt workers, who are contracted out by CMU to provide food service in cafeterias, and university employed operating engineers (construction workers) as labor unions at CMU. 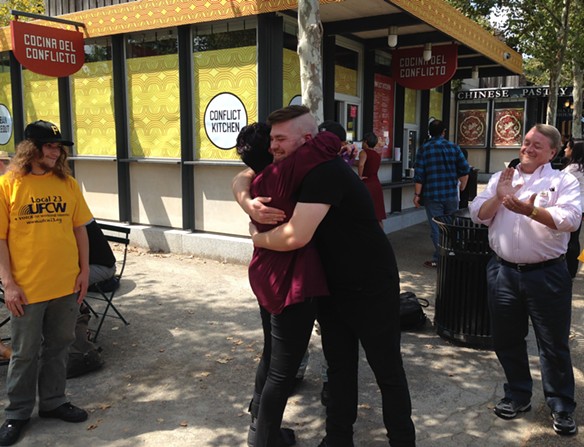 Photo by Ryan Deto
Conflict Kitchen worker Quinton Steele embraces a technical worker from Allegheny General Hospital, who was there in support of the restaurant's new union.
Conflict Kitchen is an art project/restaurant that serves cuisine from a country that is currently going through some kind of conflict with the U.S. The stand has genered controversy over the years, with the kitchen closing in November 2014 due to death threats in response to the restaurant serving Palestinian food. Their current menu features Cuban cuisine.

Workers at Conflict Kitchen joined forces with Local 23 United Food and Commercial Workers Union (UFCW). Conflict Kitchen employee Quinton Steele announced at the press conference that CMU has recognized their right to form a union and has agreed to meet them at the negotiating table. A majority vote from workers was not needed since CMU recognized majority support was already present (14 out of 15 workers signed authorization cards).

“We are thrilled to be organizing,” says Steele. “We think it is important to use our visibility to help the fight for other service workers.”

Max Lyons has been working full-time at Conflict Kitchen since April and was part of the effort to unionize. He says he makes approximately $10 an hour, plus a small amount of tips, and started to think about unionizing after the victory of New York City fast-food workers to earn $15 an hour.

According to the National Restaurant Association, there are 14 million restaurant industry employees in the U.S. Lyons says these workers are making far less than other comparable service workers. “That constitutes a conflict that is widespread in our own country, and we want to address it," he says.

Steele says that workers at the restaurant started the process to form a union two weeks ago and was elated to see the completion happen “shockingly fast.”

Local 23 UFCW president Tony Helfer says the speed in which the union forms is “the way the National Labor Relations Board Act is supposed to work.” The NLRB Act was passed in 1935 to “protect the rights of employees and employers,” according the NLRB website.

He commends CMU for their cooperation. “When people feel they want to organize a union, they should freely be able to,” says Helfer.

CMU Executive Director of Media Relations Ken Walters issued this statement to City Paper in response: “The university confirms that it has voluntarily recognized the right of the Conflict Kitchen food service workers to unionize, and has no further comment as personnel and collective bargaining matters are treated confidentially."

With the formation of the union at Conflict Kitchen, another pillar falls in the ongoing effort to stop service workers from unionizing at large, local nonprofits. In June, service and technical workers at Allegheny General Hospital (AGH) formed a union of 1,200 employees. AGH is the Pittsburgh’s third largest nonprofit, and CMU is the city’s fourth largest.

The largest nonprofit, UPMC, (and by a giant margin of more than 30,000 workers) has been in the midst of a three-year fight against its own service workers efforts to form a union.

Steele feels like the environment around unions is changing and the tide is turning in the direction of service workers.

“Workers at UPMC are taking it in the right direction,” says Steele. “It feels like there is a better place for unions in Pittsburgh now.”