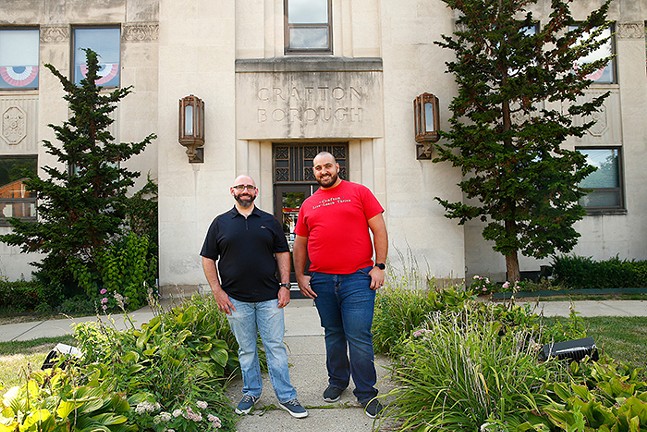 CP Photo: Jared Wickerham
Crafton councilors Edward Alo and Anthony Saba
On Nov. 24, the Crafton Borough Council unanimously voted to pass a non-discrimination ordinance that would create a commission to address discrimination claims and add civil rights protections specifically for the LGBTQ community, as well as other minority groups.

All seven members of Crafton Council voted in favor to protect its residents from discrimination on the basis of their sexual orientation, gender expression, and/or identity. Crafton is a small suburb just west of Pittsburgh city limits.

Pennsylvania has state-level protections based on race, sex, age, religion, and disability status, but the LGBTQ community is not included in these protections. This means LGBTQ people in Pennsylvania can be evicted or denied public accommodation based on their identity without legal recourse, unless municipalities pass ordinances to protect the LGBTQ community and individuals from prejudicial treatment. (The U.S. Supreme Court recently granted LGBTQ Americans workplace protections, but not housing or public accommodation.)

“In a state and country that does not have universal protections for every person, it is very important that we protect those that do not have these protections, namely the LGBTQ community,” says Crafton councilor Anthony Saba. “As an openly gay man, I feel that it is very important for anyone to feel comfortable in being themselves, especially within their own community.”

Saba and fellow councilor, and Saba’s spouse, Edward Alo were two out of the seven who voted to pass the ordinance in Crafton. The couple spearheaded the initiative in their municipality. This now makes Crafton the fifth municipality within Allegheny County after the city of Pittsburgh, Ross, Mt. Lebanon, and Etna, who have recently passed their own LGBTQ focused non-discrimination ordinances. Allegheny County as a whole also offers non-discrimination protections to its LGBTQ residents, but localities can pass an ordinance so the complaint process is run through them, instead of the county.

According to LGBTQ website QBurgh, Crafton becomes the 62nd municipality in Pennsylvania to add non-discrimination protections for LGBTQ residents.

The ordinance in Crafton would create a commission in which people could report their discrimination claims of, for example, wrongful evictions based on their sexual orientation, gender expression, and/or identity. The board of the commission would adjudicate the claims as well.

“While the commission does not have the authority to hand out civil penalties, it provides the claimant a ticket to pursue claims in the Court of Common Pleas,” says Saba.

Not every local borough has been so welcoming to the idea of providing its LGBTQ residents protections. Recently, the Sharpsburg Borough Council rejected a similar proposed non-discrimination bill that would have also created a Human Relations Commission to assess discrimination claims and extend protections for LGBTQ individuals.

Saba stresses that broadening protections and civil rights to LGBTQ Pittsburghers is essential to continue to build progressive and safe communities in Allegheny County.

“Passing a non-discrimination ordinance should not be a difficult task, but it’s necessary until the state and/or federal government extends more protections,” says Saba. “I would also encourage my fellow elected officials to advocate for every citizen within their communities to have the protections and that we must continue to push for progress towards true equality.”

Overall, Saba says that citizens of Crafton have accepted the ordinance’s passing with open arms.

“The response has been positive,” says Saba. “This means that Crafton is welcoming of everyone and every person is free to be themselves and that we are one step closer to achieving true equality for all.”
© 2023 Pittsburgh City Paper