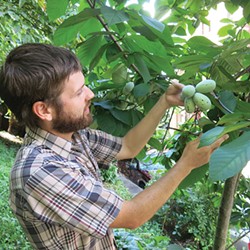 Photo by Bill O'Driscoll
Andy Moore inspects a pawpaw tree in a yard on the South Side Slopes.

One bright afternoon in early August, Andy Moore biked up into the South Side Slopes to visit three of his favorite pawpaw trees. A front yard in the Slopes is an odd place to find pawpaws, which typically grow wild in forests. But then, the pawpaw is a singular plant: The trees bear the largest edible fruit native to the U.S., a fruit whose creamy texture, richly orange flesh and banana-meets-mango flavor belie its origins as a tropical migrant that somehow thrives this far north.

Standing next to one of the trees, just feet from the sidewalk, Moore grasps a slender branch and turns a cluster of pale-green fruits resembling small mangos to his nose. The pawpaws are hard, their skins chalky. He sniffs. “Nothing, not yet,” he says. The aroma will come in a few weeks, presaging September’s ripening. Then enthusiasts like Moore will have to work fast: Although unripe pawpaws, once picked, won’t ripen, tree-ripened fruits tend to drop and, especially on sidewalks, splatter. Moreover, the season lasts a month. Either you get your paws on pawpaws then or you don’t get them at all.

In their geographic range — including most of the Eastern U.S. — pawpaws  (asimina triloba) were a favorite food of Native Americans, and of newer Americans and their descendants into the 20th century. Never commercially cultivated, however, pawpaws were long mostly ignored until a recent revival by foodies, locavores and neo-foragers. Now Moore, 30, a writer living in Manchester, has written the first book dedicated solely to the pawpaw. In Pawpaw: America’s Forgotten Fruit (Chelsea Green Publishing, $26), he combines natural history with an investigation into pawpaw’s prospects as a commercial crop.

Moore ate his first pawpaw in 2010, in the Ohio woods. The Central Florida native quickly became obsessed with the fruit, its folklore and its future. By 2011, he was attending scholarly conferences on the pawpaw, at one of which he decided to write the book. Moore, who’s also a volunteer at Ballfield Farm organic community garden, in Perry South, quit every paying gig he had save his part-time job in the University of Pittsburgh’s qualitative data-analysis program. He raised funds on Kickstarter and began traversing the country, and the countryside, on his researches. “I can spot a pawpaw [while] driving 75 miles per hour on the interstate,” he says.

The book introduces characters like Neal Peterson, a.k.a. Johnny Pawpawseed, a West Virginian who in the 1980s went broke trying to farm pawpaws, but continues to study and promote them. Moore also visits Carroll County, Md., home to America’s biggest pawpaw orchard, and the Ohio Pawpaw Festival, in Lake Snowden, where thousands gather each September for pawpaw ice cream, pawpaw beer and, basically, any way to celebrate pawpaws.

The book’s central puzzle is why this botanical anomaly in plain sight remains obscure. After all, Thomas Jefferson cultivated pawpaws. (Moore himself found long-forgotten trees at Monticello.) A century ago, a genetics journal ran a national contest to find the finest pawpaw, and pawpaws seemed poised to follow other wild fruits, like the blueberry, into cultivation. 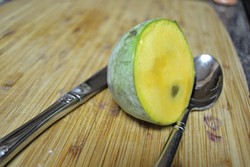 But the pawpaw is eccentric. It’s tastiest when its skin is blackest. It has lots of big seeds and minimal shelf life, and travels poorly. Nonetheless, its popularity isn’t limited to fans who stalk urban trees in parks or front yards, or hike to favorite patches in the woods (and who guard the location of such sites jealously). Increasingly, pawpaws have been appearing at farmers’ markets and even some supermarkets, selling out at $10 a pound. High-end restaurants order them by the crate. Kentucky State University has a pawpaw research program. Some observers see pawpaw possibilities for small farmers phasing out tobacco — especially if someone can figure out an efficient way to separate the tasty pulp from the inedible skin and seeds.

Locally, Wilkinsburg’s Garden Dreams sells about a dozen pawpaw seedlings a year. “It’s kinda the next thing,” says the nursery’s Bob Madden. Tree Pittsburgh sells out of pawpaws whenever it offers them, says Jake Milofsky, the nonprofit’s tree-care and restoration coordinator. Both Tree Pittsburgh and the Pittsburgh Parks Conservancy have used pawpaws — which thrive in deep shade — in forest-restoration plantings.

Moore thinks pawpaws were forgotten in the 20th century mostly because of urbanization, and the supermarketing of our food culture: “When we stopped going to the woods, we stopped knowing the pawpaw.”

Still, he sees no paradox in writing a book that’s mostly about attempts to cultivate, process and market the wild fruit he loves.

In fact, he adds, the very thing that pushed the pawpaw back into obscurity — urbanization — continues to threaten it, as woods are bulldozed for subdivisions. To survive, he says, pawpaws must get more popular. “If you want to save a food,” he says, “you eat it.”