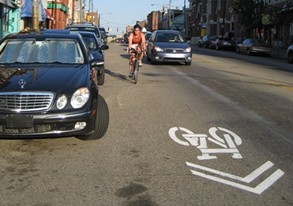 bikepgh.org
Example of a sharrow sign clearly marked on the road
If you happened to be outside yesterday afternoon, you might have thought, “This is a perfect day to ride a bike.”

Around 4 p.m., Thu., July 23, two Pittsburghers had that same idea and decided to ride together down Butler Street, a popular destination for cyclists and pedestrians. But when they rode away from the curb and into the center of the lane to go around a parked car, a man driving a blue Dodge Charger screamed obscenities at them.

The man then blasted his horn, exited his car and approached the cyclists on foot. He pushed the female cyclist to the ground. Police were able to identify the man, a Wilkinsburg resident, and charges of harassment against him are pending. Sonya Toler, public safety spokesperson for the city, says the man's name has not been released.

Butler Street has seen its share of bicycle-related contention lately. Last week, City Paper reported how PennDOT wanted to install a center-line rumble strip on Lawrenceville's main thoroughfare. The state agency later rescinded those plans thanks in large part to community outcry from the Lawrenceville Bike and Pedestrian Committee.

Butler Street runs through the commercial district, and through there, much of the street is marked with sharrows, or painted signs on the road, which remind drivers that it is an oft-used bike route.

However, according to Bike PGH Executive Director Scott Bricker, the sharrows (and the pedestrian crosswalks) have been temporarily removed during a three-month-plus repaving of Butler Street.

According to Bricker, the incident occurred near the Allegheny Cemetery, a stretch of Butler that used to have a bike lane, and now, thanks to the repaving, has no sharrow signs either.

Bricker points out that during this prolonged paving process, a temporary yellow center line has been painted on the street for cars, even though pedestrian and bike-friendly signage has been ignored.

Bricker, who rides through Butler Street and all around the city every day, says that sometimes bikers will be harassed or threatened on roadways, but these kind of incidents are “outliers.” He also says he is very pleased with the police response to the incident.

What he doesn’t understand is why drivers take out so much aggression on cyclists. “It is really other cars that cause traffic,” says Bricker. “Why don’t drivers get out of their cars and chop down the traffic light, when they hit a red light?”

Bricker believes that incidents like this will happen less often with increased bike and pedestrian infrastructure. PennDOT is planning to paint highly visible piano-style pedestrian crosswalks on Butler in the near future, according to Bricker.

But there is so much more that could be done. Bricker believes that a contiguous biking network should be completed from Downtown to Highland Park, like the one outlined in the Allegheny Riverfront Green Boulevard Project. That project proposes a trail along the river, running uninterrupted from Downtown to 51st Street in Lawrenceville, as well as parks and green spaces alongside Penn Avenue, in the upper Strip District, and Butler Street.

The current bike lane, that starts on Penn Avenue Downtown, abruptly ends at 16th Street in the Strip. Bricker says there are no simple connections for riders using this route. (Most riders will usually find a way to get onto Smallman Street, but no road signs along the bike path suggest this.)

“Interactions like this would happen way less often if you connected bike infrastructure from neighborhood to neighborhood,” says Bricker.