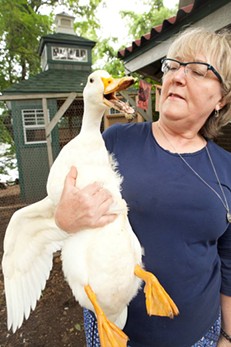 Photo by Heather Mull
Jody Noble-Choder, of Highland Park, holds one of her Indian Runner ducks. Before today's urban agriculture amendments, Noble-Choder's animals were illegally kept in her yard.
In a unanimous vote this morning, Pittsburgh City Council passed amendments to the urban-agriculture zoning code, making it a right, rather than an exception to the law, for residents to have bees, chickens, ducks and even goats.

"We’re really grateful for the city’s leadership on this," says Marisa Manheim of Grow Pittsburgh, one of four organizations that collaborated with the Department of City Planning on the amendments. Other organizations included Pittsburgh Pro-Poultry People, Burgh Bees and the Pittsburgh Food Policy Council of Penn State Center-Pittsburgh.

Council voted 8-0 (Councilor Daniel Lavelle was absent) to change the 2011 urban-agriculture zoning code, making the process easier and cheaper for residents, and expanding the zoning areas for where urban-agriculture activities can take place.

"I'm in support because I think it removes barriers for those participating in urban agriculture," Councilor Natalia Rudiak told City Paper last week before the vote.

Under the 2011 zoning rules, residents had to apply for a variance, costing them more than $300 and taking up to four months. The new rules require a one-time fee of $70 and reduces the paperwork to just a few forms.

"It might be a couple papers and site plan that needs to be drawn, and we'll have instructions for that," says Shelly Danko-Day, the city planning open-spaces specialist.

Danko-Day says that the Department of Permits, Licenses and Inspections will likely visit a resident's home to assure that any animal enclosures are properly installed.

Another big change for the city is the fact that privately owned land in some zoning districts, including highway commercial, neighborhood commercial and industrial areas, will now be allowed to have agriculture as the primary activity on the land.

"I'm excited about that," she says. "We have a lot of vacant land that's not being utilized."

Resident still must adhere to measurement standards. For instance, people who have a 2,000-square-foot lot, including their house or other structures, can have up to two beehives with five chickens or ducks, or two beehives with two miniature goats. The rules change depending on the size of one's property, and Grow Pittsburgh has published an easy-to-understand version on its website.

"Beyond the actual produce itself, it gives people a chance to engage with their food and understand the food system," Manheim says. "We hear about avian flu in the central U.S., and it resonates so much more when people understand the needs these animals have."

Also, the legislation now opens the door for people to sell produce from on-site farmstands from their backyards.

"We’re excited about the possibilities this will open for individuals, communities and organizations here in the city," says Heather Mikulas, of Penn State Center-Pittsburgh. "It can really have a positive impact on the quality of life. It has implications of more beautiful greens spaces, potential economic activities, healthier and more active lifestyles, and could change how the face of Pittsburgh looks."

Check out this week's City Paper on the impact of the new legislation in Wednesday's print and online editions.