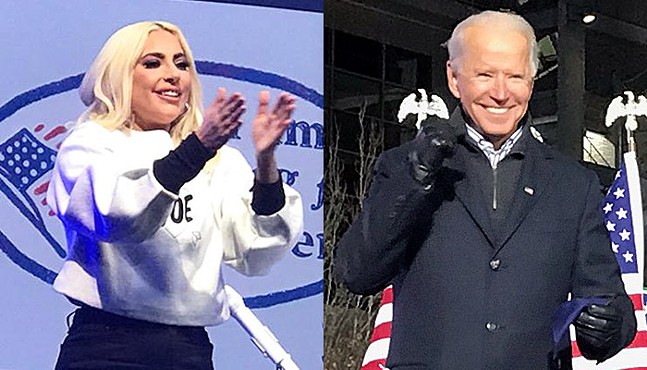 CP photos: Ryan Deto
Lady Gaga and Joe Biden in Pittsburgh
On Election Day eve, Democratic presidential candidate Joe Biden closed out his campaign with a final drive-in event on Pittsburgh’s North Shore. The attendees were spread out in vehicles across a large parking lot outside Heinz Field and an adjacent parking garage, and also included hundreds of walk-up guests who stood near the edges of the parking lots. There were likely more than 1,000 people in attendance.

The event included speeches from Biden, his wife Dr. Jill Biden, local union leaders, and Democratic politicians, as well as a speech and a musical performance by superstar Lady Gaga. The campaign event also displayed on a large screen another simultaneous live event that vice presidential candidate Kamala Harris was hosting in Philadelphia, which included a performance and speech from singer/songwriter John Legend.

During his speech, Biden hit on the major notes of his campaign. He spoke about protecting the Affordable Care Act, and warned of Trump’s efforts to undermine it and to try to repeal the health-care law. The largest cheer of the night was from Biden’s mention of his support of raising the federal minimum wage to $15 an hour. He also spoke about his support of labor unions and said on multiple occasions that unions built the middle class in America.

“If I am elected, you are gonna see the most pro-union president in American history,” says Biden.


“If I am elected, you are gonna see the most pro-union president in American history,” says Biden. pic.twitter.com/HLRYNpv7RK

Biden also spoke about the need to address climate change, and how Western Pennsylvania can plan an important role. He reiterated that he won’t ban fracking, despite false claims from the Trump campaign that he wants to do so. Biden’s campaign has said it wants to end new drilling wells on public lands. Even so, fracking has been declining severely under the Trump administration thanks to low natural-gas prices due to an oversupply. The Pittsburgh region has lost hundreds of fracking related jobs in 2019, possibly more.

“Folks, we have to vote to meet the challenge of climate crises. We can do it by creating jobs here in Western Pennsylvania,” says Biden.


“Folks, we have to vote to meet the challenge of climate crises. We can do it but creating jobs here in western Pennsylvania,” says Biden. Again says he won’t ban fracking, but will end subsidies to oil comapanies. pic.twitter.com/NUVTLGSyYr

There were many Pennsylvania mentions during the event. Biden spoke of his childhood in Scranton. Gaga mentioned the time she used to live in Lancaster and how she would visit Pittsburgh when coming to see her grandmother, who lives just across state lines in Moundsville, West Virginia. Biden also mentioned the Pittsburgh Steelers being undefeated at 7-0, to large cheers from the crowd.


Lady Gaga with a special Pennsylvania shout out in “You and I” pic.twitter.com/tX31dtqLOG

Gaga included many Pennsylvania shout outs in her two performances, which included "Shallow" and "You and I." In between performances, Gaga spoke about her friendship with Biden and how she encouraged him to run. She also encouraged Pennsylvanians to vote, even people less inclined to politics.

“You got to go out and vote, and those friends who might not vote, go get them to vote,” said Gaga.

Earlier in the night, Harris, who spoke via a video screen from Philadelphia, reminded the crowd about how Pennsylvania will likely take some time to count all its votes. People shouldn’t expect Pennsylvania to count all of its votes on Election Day, since some counties will be counting their mail-in ballots the next day, and could take days or more to finalize the vote count. “It ain’t over 'til it’s over,” said Harris.

Dr. Jill Biden said the biggest difference between Biden’s campaign and that of President Donald Trump is Biden is focused on unity, while Trump sows division.

“Democrats and Republicans, we don’t have to agree on everything. Joe will be a President for all Americans,” said Jill Biden.
© 2022 Pittsburgh City Paper