OP-ED: The City of Pittsburgh and the police unions bargained away the public’s health and safety. It’s time to reclaim it. | Pittsburgh City Paper 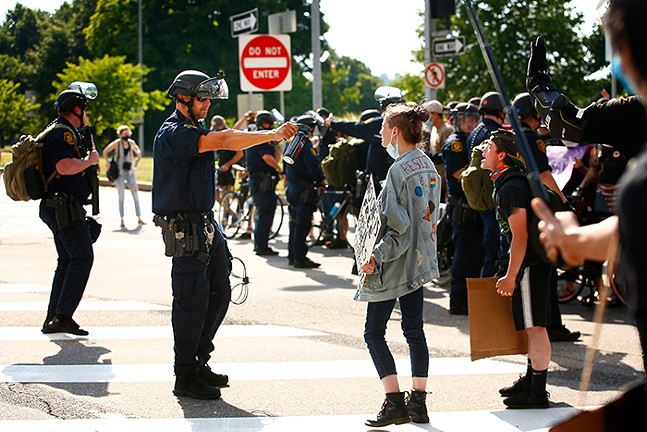 CP photo: Jared Wickerham
A Pittsburgh Police officer in riot gear threatens a protester with pepper spray during a demonstration in Downtown Pittsburgh on Sat., July 4, 2020.
Last summer, Pittsburgh erupted into protest in the wake of the murder of George Floyd. Soon after, a string of violent incidents called into question the practices of the Pittsburgh police. Mayor Bill Peduto vowed reform. Last week, the Mayor’s self-appointed task force published its findings and recommendations. The crux of police misconduct — collective bargaining agreements — was predictably under-addressed. Notably, the task force stated, “we acknowledge that proposed reforms that affect any negotiated terms and conditions of employment must be bargained by the City and the [Fraternal Order of Police].” The problem is these contracts, authorized by state law, have bargained away the public’s health and safety by including provisions that shield reckless officers from disciplinary actions, limit investigations, and allow police to escape accountability. Black and Brown communities are especially at risk as a result.

There is, however, a long-standing body of law that would support the proposition that the City should not acquiesce to disciplinary and investigative limitations in contracts nor should the state legislature authorize such contract provisions that are repugnant to the public’s safety and that “bargain away the public health or public morals.”

In exchange for the inability to strike under state law, the police unions can bargain with the City for contract provisions that include, among other things, fair wages, working conditions, benefits, and binding arbitration. However, the contract provisions include far more than terms and conditions of employment. The contracts permit officers to seek grievance hearings to reverse disciplinary actions. Past disciplinary actions may be considered, but are not required, in promotions. These prior disciplinary actions are erased from the records after a fixed time period, and once erased cannot be considered at the promotion review or new disciplinary determinations. Further, police officers cannot be forced to testify before the citizens police review board. Anonymous complaints are effectively prohibited and destroyed one year after the investigation is complete, and complaints without corroborative evidence are classified as unsubstantiated. To boot, the City must pay legal fees for lawsuits against officers.

These contractual limitations endanger the public.

For example, take officer Paul Abel. Abel is known as the cop that “busted down doors and pulled people out by their necks.” Records show decades worth of misconduct. He’s caused unnecessary injury by pistol-whipping a person, which caused his gun to go off. He’s been accused of wrongfully arresting a person. He was briefly suspended without pay. He’s been before the City’s citizens review board numerous times. But, as a result of collective bargaining provisions, Abel was reinstated after a favorable arbitration hearing decision.

CP photo: Jared Wickerham
Jerry Dickinson
It is no surprise that Abel was, just a few months ago, back in the news for threatening to taser and arresting an innocent bystander at a farmers’ market without probable cause. Abel is beyond the reach of the chief to fire, thus he’s still on the job. This is a pattern of misconduct that could lead to innocent Black lives being choked to death or gunned down. All of this is at the public’s expense and at the expense of the public’s safety. To make matters worse, the contracts won’t be revisited for years to come, meaning the public is essentially stuck with these officers. The bottom line is that “discipline of police officers should not be a subject of collective bargaining.” The problem is that it is very difficult to unilaterally void these contracts, because the Contract Clause of the Pennsylvania and U.S. Constitutions prohibits the government from impairing the obligations of existing contracts.

However, in the late 19th and early 20th centuries the U.S. Supreme Court held that the Contract Clause could not override the States' power to impose regulations reasonably necessary to secure the “health, safety, good order, comfort, or general welfare of the community.” The Court upheld state laws that revoked contracts of lottery corporations, impaired prior corporate charter agreements, modified land contracts, or inserted bankruptcy regulations into existing arrangements. Chief Justice Charles Hughes, in a case that’s never been overruled, explained that States “cannot bargain away the public health or public morals.” In other words, contracts authorized by state law could not limit future governments from passing laws that may abrogate contracts for the public good.

The Pennsylvania Supreme Court has long-recognized and applied a principle that might permit the City to escape from the contract provisions through the state legislature abolishing these dangerous deals. In 1939, The Pennsylvania state supreme court upheld a law that modified the price term of existing contracts for the production, distribution, and sale of milk between the state and private industry. At the time, the State was concerned about the impact of the unregulated milk industry on public health. The Court found that the Contract Clause does not prevent the state from modifying or terminating existing agreements, even those made with cities or states, if it is necessary to do so “for the good of the public,” notwithstanding the law destroying some existing contract rights.

These bodies of law have never been repudiated. They’ve also rarely, if ever, been wielded to address police brutality and misconduct. If States can void gambling contracts, modify milk agreements, and impair corporate charters, all in the name of preserving the public health and public morals, then the state assembly can pass a law to abolish limitations on discipline and investigations that are clearly adverse to the public’s safety. The political obstacles are enormous, but meaningful reform cannot be attained without identifying the roots of the police misconduct problem and addressing it with law.

Police violence is a sufficiently broad social and economic problem that warrants bold progressive action. People's lives, many of them Black and Brown, are increasingly at risk. The longer these contract provisions remain in place, the more likely it is that reckless officers will continue to endanger the public’s safety.Jerry Dickinson is an Associate Professor of Law at the University of Pittsburgh School of Law. He teaches and writes in the areas of constitutional law, property and race and the law. Professor Dickinson is a former candidate for U.S. Congress.
© 2022 Pittsburgh City Paper