Photo by Alex Zimmerman
Protesters gathered outside the City-County Building this morning.
City officials began their presentation this morning on what they believe to be a fair contract with the police union — and, as expected, their argument focused mostly on the city's financially distressed status and the need for long-term fiscal responsibility.

But before the city's lawyers began, about 14 protesters stood outside the City-County Building Downtown demanding a more transparent disciplinary process and a tougher Citizen Police Review Board, and that officers be required to live in the city (a requirement that's currently in litigation).

The protest, organized by We Change Pittsburgh, hit on issues that have so far been absent from the arbitration proceedings. "Police officers are given the authority to perpetrate violence, and therefore should be subject to more exacting public scrutiny," says Bret Grote, a 33-year-old protester, surrounded by chants of "from Baltimore to NYC, end police brutality!"

"[We're] protesting for discipline and accountability in these contract negotiations," adds Celeste Scott, one of the protest's organizers. 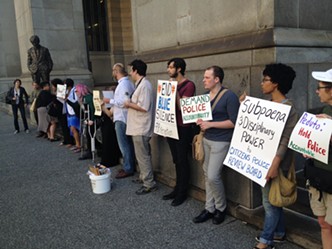 Photo by Alex Zimmerman
In the past, the Peduto administration has indicated it is interested in a reformed disciplinary process as part of a new contract. City Solicitor Lourdes Sanchez-Ridge told City Paper that the city plans to make a presentation on disciplinary issues in the next few days of arbitration proceedings.

But back up on the sixth floor, at least in the morning session, the administration's arguments focused mostly on debunking the FOP's claim that the arbitration panel could award a contract that is more favorable than what is allowed under laws that govern the city's financially distressed status. (Because, as the union argues, the city shouldn't be classified as distressed in the first place.)

"This isn't a trial on Act 47," the law that governs financially distressed municipalities, argued Gretchen Love, a private lawyer hired by the city to argue its case. The FOP "[doesn't] like the process. There was never an intention to work with the city."

Because contract negotiations between the city and union never resulted in an agreement, decisions about the contract go to binding arbitration, a process in which a three-member panel ultimately breaks the gridlock. Today marked the city's first day of arguments and expert testimony. The FOP made its case over the past month.

The city argued that 71 percent of its overall expenses come from wages and benefits, a number that will only rise. "It is increasing because of cost drivers like wages, health care, pensions and post-retirement health," Love says. "Any additional wage increase or benefit enhancement ... just exacerbates this problem."

As the city's presentation was underway, Mayor Bill Peduto chimed in with a statement of his own. "The only impact that these proceedings have relative to the City’s financial success is whether it assists the City in regaining its financial health, or whether it attempts to push the City back to the same place it was in 2004. It is that simple, and important," Peduto's statement reads in part.

"The City cannot tax its way to financial sustainability, sell more assets, further reduce services that are already cut to the bone, or keep ignoring investments in our infrastructure. If we did, the City we share would die."