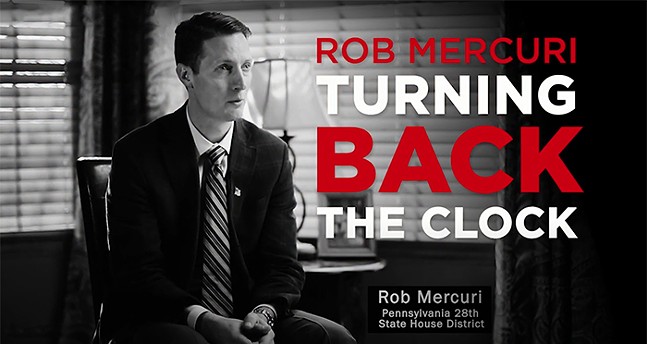 Screenshot taken from YouTube
Screenshot of a television ad attacking candidate Rob Mercuri (R-Pine) for his support of discrimination against gay people.
The majority of Pennsylvanians support LGBTQ rights like nondiscrimination and same-sex marriage, but that hasn’t stopped anti-LGBTQ groups from aligning with local Republican candidates in attempted attacks against Democrats who support LGBTQ rights.

This month, the PA Family Council — which openly opposes same-sex marriage and supports allowing businesses to discriminate against LGBTQ people — sent out fliers in the Pittsburgh area claiming that Democratic candidates want to “push to force schools to allow boys who identify as girls to compete against girls” in youth sports.

The message is blatantly anti-trans in implying that transgender girls are not girls. The mailers reference two trans girl high school athletes from Connecticut. The Trump administration, under direction of Education Secretary Betsy DeVos, recently ruled against the Connecticut Interscholastic Athletic Conference and said it might withhold federal funding if Connecticut keeps allowing trans girl athletes to compete as girls.


This is the kind of trash that org is sending out right now. pic.twitter.com/Zsk5LREb58

The Connecticut Interscholastic Athletic Conference says it is complying with the state’s nondiscrimination law which prohibits schools from discriminating against transgender students.

The U.S. Supreme Court recently granted workplace nondiscrimination protections to trans people and all LGBTQ individuals, but those do not extend to housing or public accommodations.

The mailers include an image of candidate Rob Mercuri (R-Pine) who is running in the North Hills state House District 28. Next to Mercuri’s photo, the mailer reads, “Because girls deserve fairness in sports Rob Mercuri won’t change the rules.”

It should be noted that in Allegheny County, it is already illegal for schools to discriminate against trans athletes. Mercuri doesn’t believe governments should intervene with businesses that want to discriminate against gay people. And he openly praises the endorsement he received from PA Family Council. Television ads have been playing in the Pittsburgh area attacking Mercuri's support for discrimination against LGBTQ people.

The Mercuri campaign didn’t reply to a request for comment for this story.

In addition to supporting Mercuri, the mailer attacks his opponent, Emily Skopov (D-Marshall), because she is endorsed by the Human Rights Campaign, the nation’s largest pro-LGBTQ group. In a Facebook post, Skopov said the mailer is “despicable and dehumanizing to members of the LGBTQIA+ community.” She is calling on Mercuri to disavow the message of the mailer.

“Campaign professionals always say not to post the messages from the other side, but I’m breaking that rule to show you exactly who Rob Mercuri is and what his values are,” wrote Skopov. “This bigotry contained in this mailer — bigotry that Mr. Mercuri shares — is personal. Members of my staff and volunteer team were personally hurt by it. My friends and their families were personally hurt by it.”

Anti-Trans mailer attacking candidate Emily Skopov (D-Marshall)
Democrats have been pushing to create a statewide LGBTQ nondiscrimination bill for several years, but Republicans in the state House have refused to place the bill in committee. According to a 2017 poll from Hart Research, 56% of Pennsylvanians support making it illegal to discriminate against gay people in housing and employment, while only 25% oppose. The Pennsylvania Youth Congress last year launched a public support campaign for nondiscrimination protections, which has garnered support from University of Pittsburgh, Giant Eagle, Alcoa, and other large institutions.

Currently, nine seats in the Pennsylvania state House make up the difference between flipping control from Republican to Democratic. Election forecasters have rated the state House as a toss-up and seats like District 28 are crucial to that effort.

J.J. Abbott is the former spokesperson for Gov. Tom Wolf (D-York) and current head of the public relations firm Commonwealth Communications. He believes PA Family Council mailers like these — which have also been sent out attacking state House Minority Leader Frank Dermody (D-Oakmont) and supporting State Sen. Scott Martin (R-Lancaster) — are an attempt to create a wedge issue out of a popular issue in an attempt to keep Republicans in power.

“Blocking LGBTQ non-discrimination protections is one of the biggest legislative failures of the last decade,” said Abbot, who worked for Gov. Wolf for more than five years. “It is no surprise that a bigoted organization like the PA Family Institute is trying too hard to protect this Republican majority. It should be an alarm bell to the vast majority of Pennsylvanians that support these protections to get in the fight to flip the legislature right now.”

PA Family Council, which is a branch of the PA Family Institute, did not return a request for comment for this story.
© 2022 Pittsburgh City Paper