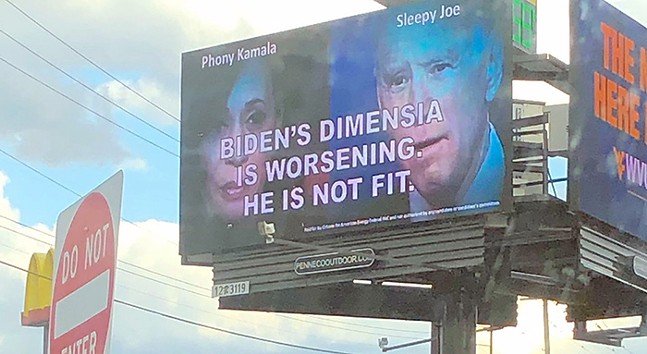 Photo: courtesy Twitter user @evan_ludy
Billboard on Route 21 in Fayette County
There are several attacks on presidential candidate Joe Biden that can stick, but one of the weakest and most perplexing swipes at Biden is claiming he is losing mental capacity and that he has dementia. None of the attacks are true, and Biden easily dispels them just by talking in complete sentences for more than one minute, something he did with ease during his last televised town hall.

But that hasn’t stopped these tired attacks. The Trump campaign and its allies are still trying to make this claim, and a billboard near Uniontown in Fayette County is entering the fray.

Problem is, the billboard — in an attempt to insult Biden’s mental acuity — misspelled the word dementia as “dimensia.”

As shown in a viral tweet, the billboard shows a photo of Joe Biden and Kamala Harris with the caption, “Biden’s Dimensia Is Worsening. He is Not Fit.” Biden is labeled “Sleepy Joe” and Harris is labeled “Phony Kamala.”

According to the Twitter user that took the photo, the billboard is located on Route 21 just outside of Uniontown, at the intersection of Matthew Drive and the Route 119 bypass.

The billboard is owned by Penneco Outdoor Advertising, which is based in Delmont, Pa. in Westmoreland County. The company has a 1-star rating on Google Reviews. One review left yesterday reads, “They can’t master basic spelling.”