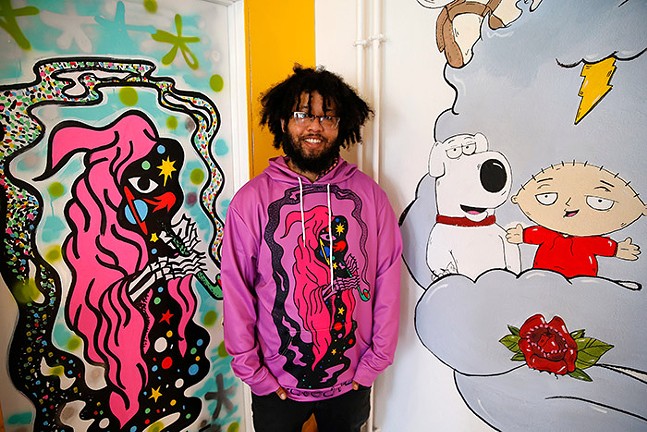 "I just thought it would be a really cool thing to add, and it's also fun as hell doing it," says Rabinovitz about his snack selection.

"Fun as hell" is mostly the vibe Rabinovitz is going for at his shop, Curated Flame, which opened in Millvale in July. The shop is bright and welcoming, with large windows that give ample natural light and colorful murals from local artists covering the walls.

One painting behind the register, an image of a gnarled Bart Simpson, was done by pop artist Matt Gondek. Local tattoo artist L. Hammel (also known by their Instagram handle @MathGoth) painted a kind of stoner grim reaper on one door, which is also printed and sold on sweatshirts in the shop. On another wall, local painter Jerome "Chu" Charles painted a bong filled with flowers, which Rabinovitz also gives away as stickers.

Rabinovitz has future plans to collaborate with local artists on unique and limited-run clothing, as well as designing some of his own, like a "marinorah" shirt for Hanukkah, of which there will only be nine, to mark the nine candles on a menorah.

While many smoke shops focus on vaping, Curated Flame specializes in glassware and accessories for people who use CBD, tobacco, marijuana, medical marijuana, and other herbs. 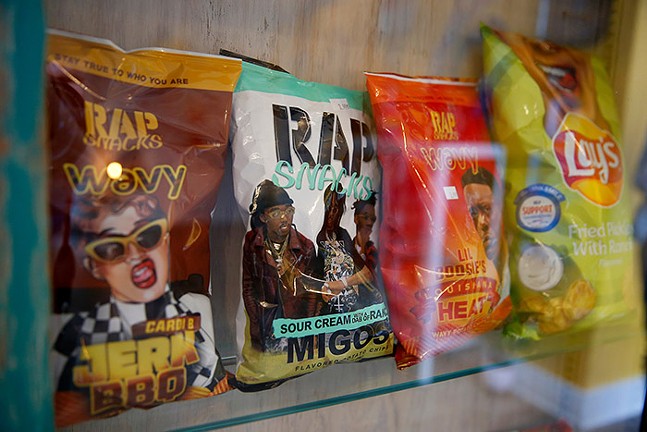 CP Photo: Jared Wickerham
Items for sale at Curated Flame
Data suggests that white and Black Americans use tobacco and marijuana with roughly the same frequency, but ownerships of smoke and vape shops, as well as dispensaries, don’t reflect that. And neither do the inside of the shops, which can feel unwelcoming to people who aren't white men, or who are new to using marijuana, CBD, or other substances. The stereotype of a stoner is usually a white man, wearing tie-dye, and maybe sporting unkempt hair. But the reality of people who want to patronize smoke shops is far ranging, and includes people of color, women, queer people, patients treating illness with medical marijuana, and people buying CBD treats for their dogs who are scared of thunderstorms. Curated Flame aims to cater to all these demographics, and everyone in between.

Before opening his own shop, Rabinovitz ran a successful online business selling pre-rolled cones (ready-to-fill joints) in floral, rainbow, leopard print, and other colorful patterns. He also worked at another smoke shop but wanted the freedom and creativity of having his own, creating a space that, in addition to selling bongs made out of vintage liquor bottles, highlighted local artists. He wanted a space that felt more welcoming than many smoke shops, which are often dark, intimidating, and not especially welcoming to all types of people.

"Most of the people that own smoke shops, they think that the 'stoner' customer base is the quintessential archetype, but that's not true," says Rabinovitz. "It's just not like the normal poncho, long-haired, white boy. It's more than that now. That's what my hypothesis was and now my customer base has just been super diverse."

He says that in the short time Curated Flame has been open, he's already had more women, specifically Black women come into his shop than he did the entire two years he worked at another smoke shop.

CP Photo: Jared Wickerham
"Typically Black people aren't going to glass shops that often, so it's just amazing to see this, that people are liking my shit, and there's people that feel comfortable enough to come in here," says Rabinovitz. "And I want people to feel comfortable."

Part of the diverse boost in his business came from being featured on @BlackOwned.PGH, an Instagram account created in May by college student Kyley Coleman to highlight Black-owned businesses in the Pittsburgh area. The account posted about Curated Flame at the end of July, and Rabinovitz says even in October, he is still getting customers who say they heard about his business from the Instagram post. He says he can think of one other smoke shop in the city that might be Black-owned and doesn't know of any that are owned by Black women.

While recreational marijuana is not yet legal in Pennsylvania, Gov. Tom Wolf has pushed its legalization as an economic aid during the pandemic downturn, and local politicians like State Rep. Jake Wheatley (D-Hill District) have pushed for its passage. But in states where it has been widely legalized, the industry is still overwhelmingly white-dominated. In 2016, a Buzzfeed investigation found that about 1% of marijuana dispensaries in the country are Black-owned.

If recreational marijuana is legalized in Pennsylvania, Rabinovitz said it would increase his business as far as selling paraphernalia and merch. (Current Pa. law states that dry flower can only be purchased by medical marijuana patients for vaporization, not smoking, for example.) But Rabinovitz says he likely wouldn't be able to actually sell marijuana out of his shop the way he currently does with CBD, which is legal in all 50 states. For one, getting a license to sell marijuana is typically expensive.

CP Photo: Jared Wickerham
"[It could be] hundreds of thousands of dollars for a license, minimum, and I just feel like it's gonna be a bunch of rich white people who can afford that and who are gonna buy up all the licenses," says Rabinovitz. "A young Black guy is probably not gonna get one."

But for now, Curated Flame is a comfortable spot for people who might not feel comfortable at a typical smoke shop, especially with medical marijuana bringing in new users from all ages and walks of life. Rabinovitz says he's helped people who come straight from a dispensary, including some people who actually work at the dispensaries.

"Every time that I went in the smoke shops when I was younger, I felt uncomfortable. I felt stupid for asking questions," he says. "And I don't want anyone to ever feel like that."