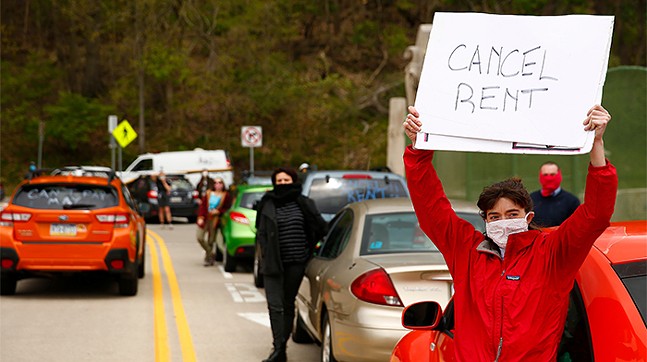 CP photo: Jared Wickerham
Protest demanding a rent and mortgage freeze amid the COVID-19 pandemic on the Greenfield Bridge in Pittsburgh on May 1, 2020
Last month, evictions resumed in Pennsylvania, as the state’s eviction moratorium was lifted. The Centers for Disease Control and Prevention responded with their own eviction rules, but loopholes meant evictions were still issued.

On Sept. 1, judges in Allegheny County received 181 eviction claims, about three times what the court processed in a typical day before the pandemic, according to PublicSource. To help tenants and landlords avoid evictions and failure of rent payments due to economic hardship, Pennsylvania created a rental assistance program early in the pandemic. It was funded with $150 million in CARES Act money, but the program had some serious problems.

For one, landlords must agree to take part in the program to receive funds. And, according to SpotlightPA, there is still a convoluted application process and burdensome paperwork requirements that mean many applications arrive incomplete and can take weeks to finalize. When the money is allocated, it is being paid out slowly.

The Pennsylvania legislature worked to fix some of these problems and streamline the application with a bill (House Bill 2868) and it passed unanimously out of committee on Sept. 17. That means the fixes were poised to clear the House, and possibly in time to help more people currently facing evictions. Both Republicans and Democrats in the Urban Affairs Committee supported the changes.

But it never was brought up. Not in a special session the state House convened on Sept. 23, and not on the regular session days of Sept. 29 or Sept. 30. It possibly could have been brought up on Oct. 1, but a GOP state Rep. tested positive for coronavirus, so the session had to be canceled. The next session doesn’t open until Oct. 19.

State Rep. Sara Innamorato (D-Lawrenceville) has been working with policy groups and advocates to get the fixes written into HB 2868, and she is disappointed the bill didn’t pass in September.

“This bill could have been on the calendar on the 29th, and then we could have voted on it yesterday and sent it to the Senate,” says Innamorato. “We already knew we were significantly behind to get it passed on Sept 30, and now it is just sitting there. … I am so extremely disappointed. We have this power as the legislature to do so much good.”


Whether it’s been bills to form an election committee to disrupt the election or destabilize the emergency order — the Republicans have been quick to move those bills through committee at the expense of ones that can help people. https://t.co/Bnf799L8t2

A request for comment to the House GOP caucus was not returned.

Kyle Webster of Action Housing is overseeing the rent relief program for Armstrong County. He acknowledged that the program got off to a rocky start, but said the fixes in HB 2868 will help streamline the process to get funds into the hands of landlords to relieve tenants who can’t afford rent.

He says right now, there are too many documentation demands to apply for the program, and one tenant he is working with had 57 pages of documents just to show that his earnings had dropped below the threshold to qualify for assistance. Webster says the changes eliminate some of those onerous requirements.

“This will help to streamline and get the application to people who have just heard about it," says Webster. "The goal of this program is to stabilize housing in the worst crises I have seen in my lifetime.”

Webster also says the demand for the relief is large, with some tenants calling him from magistrate court, as a judge is deciding on whether or not to approve evictions. Innamorato notes that when evictions filing started this month, there were 5,000 applications for rental assistance in Allegheny County alone.

Innamorato says that some corporate landlords have refused to participate in this program at all, but notes there are still mom and pop landlords that are happy to participate, if the applications can just come through easier. She says this will help them keep their properties, and their tenants, and avoid a situation where a landlord feels pressure to sell to a corporate buyer since their tenants can’t afford rent due to COVID.


Innamorato is frustrated that Republican leadership didn’t think HB 2868 compared to other efforts. She notes that House Speaker Bryan Cutler (R-Lancaster) called a special session on Sept. 23 in a failed attempt to override Gov. Tom Wolf’s veto about crowd capacity of sporting events, but Cutler wouldn’t bring HB 2868, even though it had bipartisan support.

“It just wasn’t a priority for this legislature, it is infuriating,” says Innamorato.
© 2021 Pittsburgh City Paper