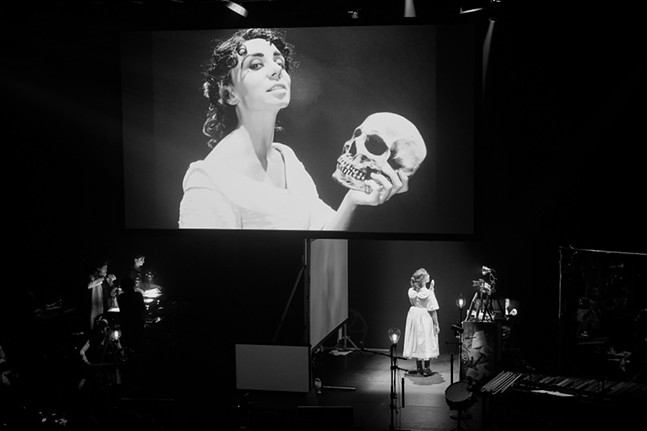 Photo: Tiffany Bessire
Manual Cinema's Frankenstein
When it comes to authors becoming just as legendary as their work, Mary Wollstonecraft Shelley has to be among the most notable. The fateful summer 19-year-old Shelley came up with her seminal horror novel Frankenstein; or, The Modern Prometheus – the result of a friendly story-writing competition with her husband, Percy Bysshe Shelley, Lord Byron, and John William Polidori – has reached near-mythic proportions, as has the claim that the book was inspired by a vivid nightmare.

So it makes sense that Manual Cinema would also focus on Shelley's life for its live, multi-media performance of Frankenstein at the City Theatre Drive-In Arts Festival at Hazelwood Green.

Opening today, the show – which runs through Oct. 17 – combines puppetry, film, and live music to create what Manual Cinema co-artistic director, Julia Miller, calls “an unexpected story about the beauty and horror of creation, and how the forces of family, community, and education can shape personhood or destroy it by their absence.”

“Manual Cinema employs the narrative frames Mary Shelley used in the novel to create the narrative structure of the show,” says Miller. “Like Russian nesting dolls, each frame is from the perspective of a different character centering on the creature, Victor Frankenstein, and Mary Shelley’s life while creating the novel. We cut between these different storylines and use different cinematic vocabulary to create a pastiche that combines different genres and styles depending on which character point of view we are presenting.”

Miller adds that the show, which originally debuted in 2018 at Chicago's Court Theatre, falls in line with the group's missions of combining “handmade shadow puppetry, 3D puppets, cinematic techniques, and innovative sounds and music to create immersive stories for our audiences.” Since the Chicago-based company founded in 2010, it has created an impressive body of work that includes live productions, music videos, films, and more. More recently, Manual Cinema contributed its shadow puppetry skills to the anticipated remake of the horror movie Candyman.

“We can’t really talk about the content we made for the film until it’s released, but I will say it was a really amazing project to be a part of and stretched the medium in a whole new direction for us,” says Miller.

Hazelwood Green also marks the first drive-in show for the group, which was originally scheduled to perform Frankenstein at City Theatre's South Side space this fall. It was moved outdoors to comply with pandemic safety precautions that recommend no indoor gatherings and social distancing.

“We were able to work with the City Theatre to come up with a very exciting alternative that allows us to perform at a drive-in movie theatre, a long time dream of ours,” says Miller.

The show will be projected on the drive-in movie screen while four musicians perform a live score composed by Ben Kauffman and Kyle Vegter, who also created the sound design for Frankenstein.

“Harry Partch and his self-invented percussion instruments were a huge influence, especially our use of glass instruments and the little robot arms,” they say.

Miller says that the Manual Theater performers are looking forward to their first drive-in show and bringing their original take on a classic work to Pittsburgh audiences.

“We are thrilled to be able to offer a safer alternative to live performance outside of the theatre setting,” says Miller. “We hope folks enjoy the live music and are moved by the multimedia performance in a time where liveness and human exchange feel so precious and fleeting.”

Frankenstein at Hazelwood Green. Showtimes vary. 4734 Second Ave., Hazelwood. Tickets are $25/20 for subscribers (call to order, not available online). All tickets must be purchased in advance and will be available until 5 p.m. day of show. citytheatre.culturaldistrict.org
© 2022 Pittsburgh City Paper