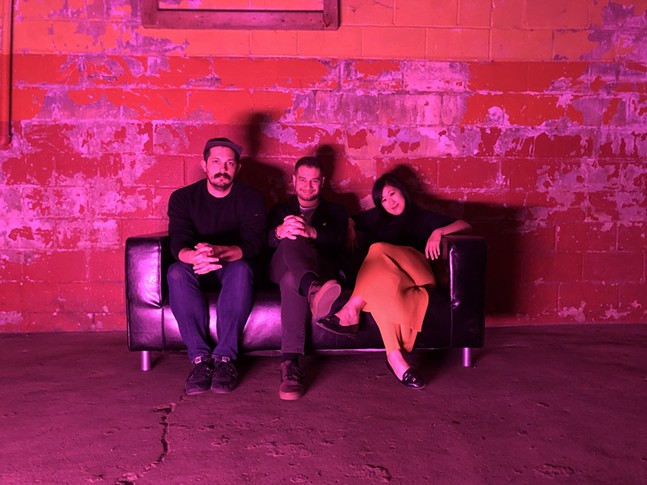 Now, as they approach the recurring party's anniversary amidst a world of social distancing, the local DJ collective is celebrating with a virtual party/benefit on Sat., Oct. 3. Because, as Moslen says, "If people can't dance in-person, at least we can give them a party so they can dance at home solo, or with friends."

This isn't the first livestreamed Jellyfish event, however, as the trio has thrown a few other virtual dance parties this year in lieu of in-person events.

"I feel like a lot of us are on our computers all day now, so I'm a tad worried about eventual livestream fatigue in general," says Molsen, "But, for now, we hope that people appreciate us trying to keep this going and keep tuning in to dance safely during these crazy times."

Shuck, Moslen, and Tsong have also started a series on Soundcloud where, in addition to their own mashups, they share Jellyfish mixes from other DJ friends in the queer community from Pittsburgh and beyond.

Ahead of the virtual event on Saturday, during which Jellyfish will be collecting donations to benefit Pittsburgh Mutual Aid, Pittsburgh City Paper chatted with Moslen via email about livestreams, the mix series, and what to expect during the party.


How do you feel Jellyfish has impacted the Pittsburgh community?

We've received lots of really nice messages the past several months from folks expressing how much they miss the party this year but also telling us that the party's been a space where they can let loose, feel safe, and form their own community within the queer scene. I also love when people say they've discovered lots of older international dance tracks or obscure gems at our parties. I'll always be a music dork at heart, so that makes me smile.

Let's talk about the virtual parties from the past few months. What has the turnout been like? How have they compared to in-person events?
I think livestreams are a decent option for the time being, but obviously, they can't compete with the whole experience of dancing on a sweaty, crowded, fog-covered dance floor cramped next to your friends (or while flirting with a soon-to-be-friend).

But at the same time, it's been rad to present new tunes in a way where attendees can experience the event however they want. If, while watching, you wanna lounge in bed, or cook a late dinner, or deck out your living room with strobes and invite a few friends over for your own little Jellyfish party, you can. The livestreams have also allowed us to focus more on the visual side of things (we edit all of our own visuals for our sets).

This [anniversary event will] be the fourth virtual Jellyfish, and they've all been well-attended, which is encouraging. I hope people enjoy the online parties, but it's gonna feel so incredible when we're finally able to dance in a room together again.

Has quarantine influenced/changed any of your music tastes?
I can't speak for the others, but quarantine hasn't caused my musical tastes to change much, but I've definitely been listening to weirder ambient sounds or more traditional music from lots of random countries (I travel internationally a lot, so music is somewhat of a substitute if I can't get on a plane and leave this country). So it's nice to do these events where I can speed up the tempo and play some harder stuff.

What do you miss the most about the in-person events?
We always felt that the in-person party somehow brought together all the friendliest, queerest, and overall best (not to mention hottest) folks in Pittsburgh into one room. We got really lucky with this party, haha, so yeah, I miss the people the most. Also the fog ... I miss all the fog lol.

How did the idea for the mix series on Soundcloud come about? What was your intention when you launched the series?
Despite all of the uncertainty and limitations that exist in the world right now, I think that now's the perfect time and the perfect opportunity to form connections with others in Pittsburgh, or around the U.S., or around the world. The mix series is an opportunity to connect with others who're throwing similar parties or DJs who've been spinning some amazing and obscure tunes. In 2019 we slowly started inviting more and more guests to play with us, so asking them to contribute a mix is kind of a continuation of that. Plus, selfishly, it's really exciting to hear others (who we deeply respect) create their own Jellyfish mixes! Hopefully, it's something we can continue even after we're back to having in-person events.

What can Jellyfish fans expect during the 3-year anniversary livestream? What are you most excited for?
This'll be the first time Adam, Stephanie, and I will be spinning together in the same room since last February (all of the other livestreams have been DJ'd from our individual homes), so that'll definitely add extra excitement to the night.

We're also really psyched to be joined by our friend DJ Hermano, who'll be spinning a set from Bogota, Colombia, and Josh Orange, who'll be getting every livestream viewer on their feet and moving.

Why did you choose to donate to Pittsburgh Mutual Aid?
They're a local collective who've been doing great work in bringing community members together to create and share resources for Pittsburghers who need some extra help during the pandemic, whether it's financial assistance, family/reproductive health center resources, groceries, or help with voting. Even if people can't tune into the livestream, they should still check out PMA's website and donate directly!

Anything else you feel is important to know?

It's been important to create parties and spaces that are designed with everyone's safety and well-being in mind, and that sentiment will be even more important when it's safe to dance in bars or clubs again. When that time comes, it'll be like starting from scratch in many ways, and we'll need to focus on how we can make parties even more accessible, inclusive, and better for EVERYONE. These are things that we can start thinking about now, but until then, it's still a blast to be playing tunes for a virtual audience.