Vanessa German's sculptures continue to impress in a new show

The work has a Byzantine beauty 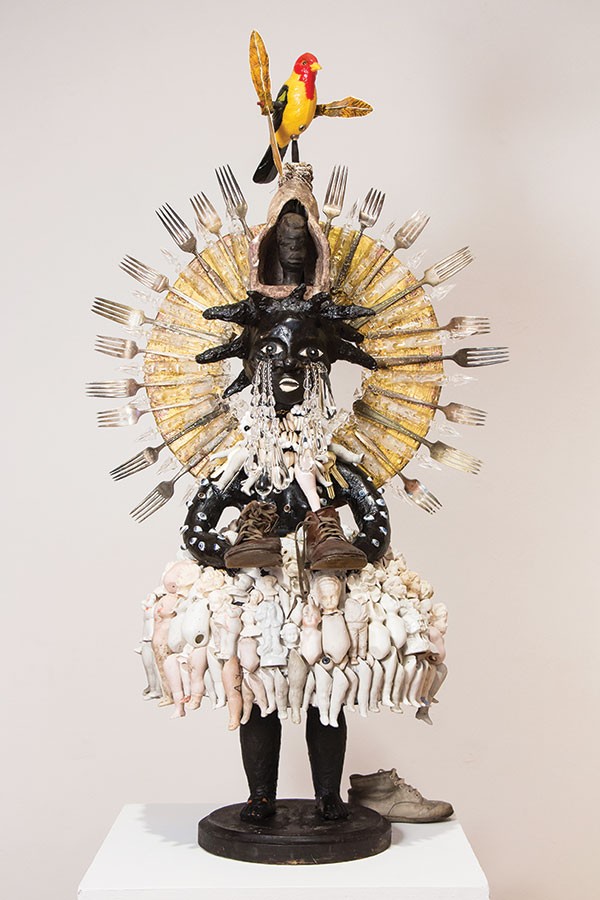 One of Vanessa German's "power figures"

Concept Art Gallery's exhibit Vanessa German: The Ordinary Sacred is an adventure in sight. The exhibition consists of eight sculptures known as "power figures" and a large collection of Black Madonnas created in a variety of materials — some painted, others assembled in an exciting way with glitter, rhinestones and found objects.

The power figures consist of dolls that the self-taught Pittsburgh artist has plastered over and fashioned with gauze and glue, then given African-American features. German stated that she wants viewers to see the faces "elementally," without racist stereotypes like the "tar baby." The figures are draped with a plethora of ordinary discovered objects attached and juxtaposed in ingenious ways.

German often works on her front porch, in Homewood, and these sculptures are the product of sacred experiences of imagination. The work also expresses her feelings about injustice, worthlessness and the fear of violence in the black community. The message includes a reckoning with the promises and lies of American culture.

The Madonnas were inspired by a mother-and-child quilt German's late mother created. They intercede for our needs, whether for black girls contemplating suicide, the healing return of joy, the victims and witnesses of gun violence, or just because you (as one title says) "woke up like dis." It is a "holy" discourse, despite the daily disrespect, slanders, poor jobs and historical lynchings.

The paintings, though stylized, have a spiritual grace. The large eyes are trusting and the haloed figures seem to float in space. The artist has manipulated body parts and articulated designs and color so as to maintain interest.

The sculptures, with their variety of imagery, also suggest a kind of folk medicine. German, whose work is exhibited nationally, is also known locally for her New Art House project and other activism. In Ordinary Sacred, her lesson seems to be: "You make yourself and your art but you are also responsible for your neighborhood and the innocent children around you." In other words, black lives matter.