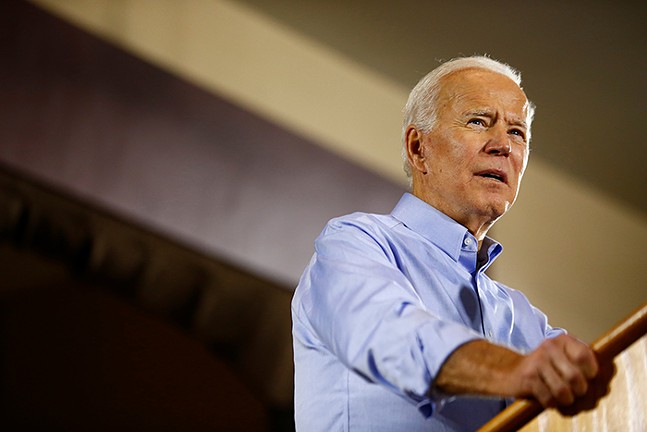 CP photo: Jared Wickerham
Presidential candidate Joe Biden speaks at Teamsters Hall in the Lawrenceville in April
With just just 40 days to go before Election Day, Democratic nominee Joe Biden leads President Donald Trump 49%-40% among registered voters, and by a narrower 48%-42% advantage, among likely voters, according to a new Franklin & Marshall College poll out this morning.

The poll, conducted from Sept. 14-20, has a margin of error of 6.5 percentage points, rendering Biden’s lead among likely voters, the most predictive sample, an effective dead heat. The poll includes the opinions of 296 Democrats, 250 Republicans, and 79 independents.

Biden’s lead among registered voters is effectively unchanged from the last Franklin & Marshall poll in August, where the former vice president held a 49%-42% lead. As of Thursday, Biden held an average 4.1 percentage point lead over Trump in the Keystone State, according to the RealClear Politics polling average.

And as was the case in August, Trump gets the edge on managing the economy, but respondents still find Biden better suited to manage the myriad of problems afflicting the country, most notably, the COVID-19 pandemic, which has now claimed the lives of more than 200,000 Americans.

The new poll comes amid a week of increased attention on Pennsylvania by both of the major party nominees. Trump barnstormed Allegheny County on Tuesday. He’s slated to campaign in suburban Harrisburg on Saturday. Biden campaigned in Philadelphia on Sunday.

During that appearance at Pittsburgh International Airport, Trump mocked Biden for wearing a mask, even as the U.S. smashed through another tragic benchmark on the pandemic. On Monday, Biden blamed Trump’s “lies and incompetence” for the ever-increasing death toll.

Biden led Trump 51%-30% on managing the pandemic, effectively unchanged from August, when respondents voiced the same sentiment 49%-29%. Biden gained some ground on managing the economy, with Trump’s 48%-44% advantage in August shrinking slightly to 48%-46% in the September canvass.

The poll results drive home the tragic intimacy of the pandemic, with 30% of respondents saying a family or member or close friend had contracted COVID-19, up from 22% who answered the same way in July. Despite that, more respondents (74%, compared to 63% in July) also believe they are unlikely to contract COVID-19 in the next three months.

Through midday Wednesday, the state Health Department had confirmed 152,544 cases of COVID-19 in all 67 counties, with 8,062 deaths.

As ever, partisanship and ideology remain the biggest drivers in voter sentiment, though Biden commands slightly more loyalty among Democrats and progressives than Trump does among Republicans and conservatives, pollsters found.

Four in five (84%) of respondents who plan to voter for Trump say they’re voting for him and not against Biden. More than half (56%) of Biden’s supporters say they are voting against Trump, not for him. There also are far fewer registered voters in 2020 who express support for a third-party, the poll found.

And with the Legislature’s Republican majority duking it out in court with the Democratic Wolf administration over mail-in balloting, more Keystone State voters told pollsters they expect to cast their ballot in person (60%) than by mail (34%). As ever, there are strong partisan differences: 53% of Democrats intend to vote by mail while most Republicans (81%) and independents (67%) say they plan to vote in person.
John Micek is the editor of the Pennsylvania Capital-Star, where this story first appeared.
© 2023 Pittsburgh City Paper