"When people are armed with the information they need, they're excited to take action"

As an organizer for Enroll America, Sean Murphy's job is to spread the word about the Affordable Care Act. But for someone whose job is related to health care, he hasn't been eating very healthy.

"I've had so much pizza since I started this job," says Murphy, a regional organizer for the nonprofit. But the pizza is more than a dietary choice. On this afternoon in the lounge at the Community College of Allegheny County's South Campus, it's bait to lure students to his table to talk about their health-care coverage or the lack thereof.

And it works. Fifteen boxes of pizza all but disappear in less than 20 minutes, but it also attracts students with questions and concerns.

At the event, Murphy and three navigators from local nonprofits addressed questions that ranged from "Am I already covered?" to "How much does it cost?" Navigator is the official title of workers who get certified to walk people through the various insurance plans available on the ACA marketplace on the federal government's enrollment site.

"If you don't get a plan, you get penalized. That's the reason I'm doing it," says Tiffany Bernatowicz of Turtle Creek. She stopped by specifically for the event. 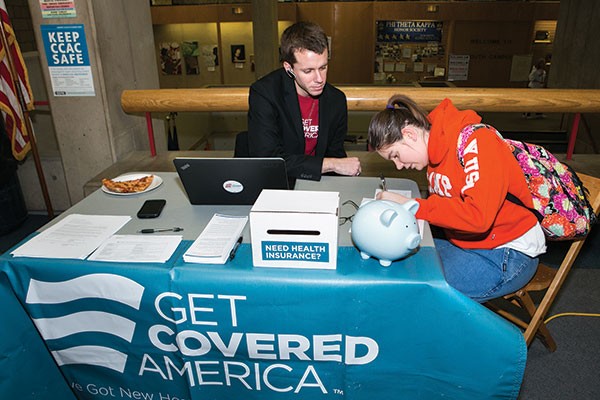 A navigator helped Bernatowicz research insurance plans, but she couldn't find even one in her price range —$100 or less. Bernatowicz also learned that she didn't qualify for tax credits to offset the cost.

"Unfortunately, I don't have the greatest income right now, but I've got to figure something out in the next two weeks," she says, referring to the Feb. 15 deadline for what the government calls open enrollment.

That earnest demeanor is necessary for those trying to communicate and guide millions of people through bureaucracy, paperwork and new tax provisions associated with the ACA. Enroll America — with its grassroots Get Covered campaign — acts as a referral agency, bringing a team of federally-funded health-care navigators from local nonprofits to its outreach events. With laptops and secure Wi-Fi hook-ups, they travel into communities to find the uninsured.

"If people sit down with an in-person assister, they're about twice as likely to get covered compared to someone who just goes to healthcare.gov, so there's a tremendous value," says Julia Cusick, spokesperson for Enroll America's Pennsylvania operations. The nonprofit was founded in 2010 with the sole mission of spreading the word about the ACA, and is mainly funded by charitable organizations and individual donors. It focuses on a dozen states where Americans who lack health care are concentrated.

"When people are armed with the information they need, they're excited to take action," Cusick says. "Many people still don't understand how much financial help is available to help them pay for their plans, but they can't get that information if a trusted source in their community doesn't engage with them and begin the conversation."

For example, she says, 81 percent of Pennsylvanians who enrolled in a Marketplace plan last year received tax credits.

"We bring consumers to the doorstep of enrollment," she says. "Our partners have deep roots in the communities we serve, and working together allows us all to better reach the Pittsburgh community."

A $250,000 grant allowed one of Enroll America's partners, the YWCA of Greater Pittsburgh, to train existing staff and hire three full-time navigators to go into Downtown, Homewood and the South Hills and focus on "vulnerable populations, such as women, African Americans and Latinos," says Beth Heeb, chief operations officer of the YWCA.

"I think Planned Parenthood is uniquely positioned because people know who we are and trust us," says Kate Dickerson, a navigator for PPWP. "We work with a lot of uninsured patients and people who are on Select Plan or Medicaid."

The network of partners reaches even further when you add the connections these organizations have made with physical locations like CCAC and others, including the Carnegie libraries and the Jefferson Regional Foundation. Enroll America has even held sign-ups at the East Liberty busway stop.

"We really just want to give our students an opportunity to get affordable health care," says Antonio Quarterman, director of student life at CCAC's South Campus. "CCAC serves all students. We don't just serve the traditional student population."