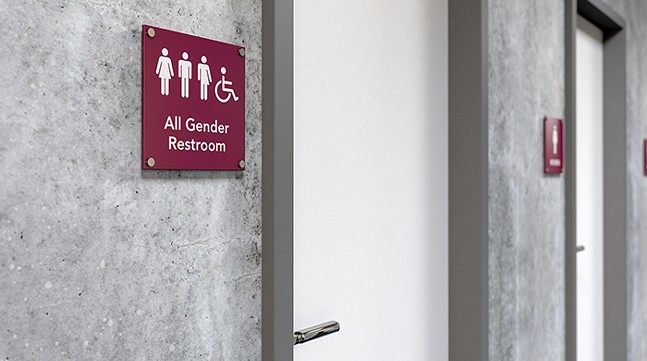 If a business or organization wants to build an all-gender or gender-neutral bathroom in Allegheny County, it must seek a code variance from the Allegheny County Health Department. That means inclusive bathrooms for nonbinary and trans people are a lot more cumbersome to create in Allegheny County than some believe they should be.

And one of those people calling for change is state Rep. Dan Frankel (D-Squirrel Hill). Today, he sent a letter to ACHD explaining that a simple language change to the county’s plumbing code would remove the barrier for some businesses and organizations to build inclusive and gender-neutral restrooms. Currently, the code only mentions "male" and "female" regarding toilet facilities in restrooms.

“I was surprised to learn that even if it wished to, a business or organization is blocked from designating an all-gender restroom due to an oversight buried in the county’s plumbing code,” Frankel said in a press release.

According to a 2018 response document from ACHD, a variance may be issued to relabel a men’s or women’s toilet room as “uni-sex” or “gender-neutral” if bathrooms provide the appropriate amount of fixtures. But a variance still has to be sought in the first place.

Frankel sent this letter to the county because the health department is currently accepting comments on revisions to the plumbing code until Fri., Sept. 25.

“The county rightly bars discrimination against individuals on the basis of their gender identity or expression, but then also bars the owners of buildings — potentially, their employers — from accommodating them,” said Frankel in a press release. “It’s time for Allegheny County to send a consistent message: that our community welcomes and accommodates everyone because diversity benefits all of us.”

Frankel has been the primary sponsor for years of the statewide bill to provide nondiscrimination protections to LGBTQ Pennsylvanians. In many parts of the state, including all counties surrounding Allegheny County, people can still be fired or evicted for identifying as LGBTQ, and have no legal recourse. Republicans in the state legislature have been blocking Frankel’s bill for years.

The state representative encourages Allegheny County residents to submit their own comments about the county’s plumbing code, which will be updated next year. People can do so at the Allegheny County website.
© 2022 Pittsburgh City Paper