Point Park students get to work at Sundance 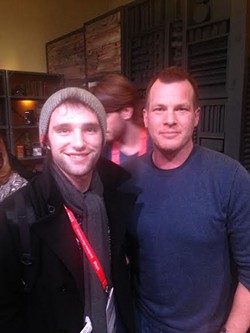 Photo courtesy of David Randolph
Justin Illig (left) with screenwriter and director Jonathan Nolan
Even as the locally shot feature Me & Earl & The Dying Girl was winning top prizes there, five Point Park University students were looking to launch their own careers at the Sundance Film Festival.

The students, who were in Park City, Utah  Jan. 21-28, were freshman cinema production majors Daymon Long, David Randolph and Justin Illig, all from the greater Pittsburgh area, and twin brothers Neiman and Aaron Outlen, senior theater arts majors from Baltimore.

The students earned the opportunity by applying to an internship with Hollywood-based company The Creative Mind Group. The business aims to usher young film and television professionals into the entertainment industry by providing a platform for filmmakers to showcase their talents at film festivals around the world.

“We’ve had students who’ve had this internship in the past, but not very often and never this many at once,” said Jeremy Braverman, who chairs Point Park's Cinema Arts department. “This group had a lot of initiative. They’re an ambitious and very talented group.”

While at Sundance, the students were expected to produce a five-minute film with their respective groups. The film voted to have the best editing, acting and production value will be sent to the Cannes Film Festival.

“Basically you come to Sundance, you make a short film and at the end of the week a panel of judges votes on the best one,” said Illig. His short film, a comedy about two girls breaking their New Year’s resolutions, was selected to go to Cannes in May. Illig will attend.

Beyond making their own films, the students were able to view many of the films premiering at Sundance. For Illig and David Randolph, the standout film of the festival was Joe Swanberg’s Digging for Fire, a buddy comedy with an ensemble cast including Jake Johnson, Rosemarie DeWitt, Anna Kendrick and Orlando Bloom.

“Sometimes it’s hard to believe you’re here,” Randolph said. “You look over and you’re like, ‘Wow, I’m in the same theater as Anna Kendrick.’ It can get pretty surreal.”

The students expect the experience to influence their future careers. “I’ve met so many people and made so many connections through this program,” Randolph said. “It will undoubtedly advance me in this field. … I experienced first-hand what it’s like to be a producer on the set of a film at the age of 18.”

According to The Creative Mind Group, the ultimate goal of the program is to place interns in a position to build relationships that can lead to jobs within the film industry.

“It gives them incredible insight into the process of promotion, exhibition and distribution of independent film,” Braverman said. “It also provides them with incredible contacts in the entertainment industry. The people they’re going to meet there can help them down the line in their careers. Just to see things happen on the inside and gain an understanding of how this process works can be really valuable.”