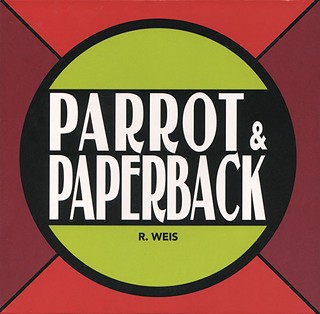 Weis, of the North Side, is a sound artist: He manipulates prerecorded ambient sounds using sequencing software, rendering them truly musical. The samples that provide the basis for this release are a parrot and a book being dropped — though you wouldn't know it to listen. The highly manipulated sounds lie somewhere between industrial, noise and Steve Reich-style soundscape composition. Cool in concept, and generally a fun listen in its execution — two things that don't always coincide in this field. Weis is an underappreciated local treasure, known more in the art world than the music scene; he's worth a second look if you're interested in exploring the outer reaches of what we call music.

Circular Signals is the product of a correspondence project between New Jersey producer The Latebloomer and local MC Moemaw Naedon (Fortified Phonetx). The Latebloomer deals largely in jazz and soul samples, laying boom-bap beats over wandering guitar noodling and organ lines to create tracks that feel relaxed but alert, verging on trip-hop. Naedon provides his signature flow of lyrics, smart but not nerdy (except for maybe that Bob Ross namecheck), confident but not overly cocky. More of the good stuff we've come to expect from the Surface Level crew; no reason this shouldn't be huge on college radio. Guest spots include Brother Seamus and Connect.