When Pittsburgh Mayor Bill Peduto appeared Dec. 21 on the CBS show Undercover Boss, the hardest thing he had to do was wield a chainsaw under the supervision of a skeptical Public Works employee. 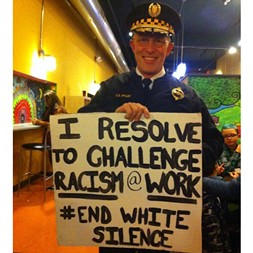 The photo, taken by activists with What's Up?! Pittsburgh, angered police union president Howard McQuillan who wrote, "By Mayor Peduto labeling us ‘corrupt and mediocre’ and now our current Chief insinuating that we are now racist, merely by the color of our skin and the nature of our profession, I say enough is enough!,” according to the Pittsburgh Post-Gazette.

The flap garnered national media attention and McLay wrote a letter of his own explaining why he held up the sign.

In his approximately five-minute appearance on The O'Reilly Factor last night, Peduto defended McLay. "For so many people, they see white politicians or white police chiefs, and they say 'they're just not listening,'" Peduto said. "I think by having that photo being seen by people, it starts a dialogue that takes us away from the polarizing debate that's already happening."

In case you weren't tuned in to Fox News last night, the above video includes Peduto's appearance almost in its entirety.