The Black Cat Market, a cat cafe that has operated out of Lawrenceville since 2018, announced the move on its Instagram page. Indigo Baloch, who co-owns and runs Black Cat with Olivia Ciotoli, says they knew the move would come eventually due to some of the limitations of their current space. Though they had planned on serving food and hot beverages, an unfortunate visit from the health department made them realize they would need to spend an extra $20,000 in renovations before that could happen.

“It just seemed like fate,” says Baloch. “We reached out to [Workshop PGH owner, Kelly Malone] and she put us in touch with the landlord and everything came together rather quickly.”

Malone previously spoke with Pittsburgh City Paper about the struggles of keeping Workshop PGH open during the pandemic, as the business mostly runs on workshops and do-it-yourself training classes. Without any in-person activities, Baloch says “they were paying for a huge space they couldn't use.”

“Luckily, they found a new home just a few doors down, and we're planning to partner with them and let them still use the space for workshops and classes once it's safe again,” says Baloch. “We've admired the work they do for a long time now and can't wait to partner in the future with them and share space together.”

The Instagram post also expressed excitement over moving into the Garfield community, describing how Baloch and Ciotoli served together on the board of directors for the Penn Avenue DIY event space, The Mr. Roboto Project.

"So being back in a neighborhood filled with so many memories is going to be exciting and nostalgic for us," reads the post.

Some of you may have heard already, but here’s our official announcement 🥰 In the next month, we’ll be leaving Butler St. and moving up to Penn Ave. into @workshoppgh’s old storefront! Leaving Butler St. is going to be very hard for us, the community down here and our neighbors were just so incredible and made us feel so at home when we first moved in. Big shoutout to @lvpgh, @citygrows, @lawrencevillepetsupply and so many more. After a couple years in this space though, we’re ready to expand and finally offer our dream of a larger cat room and a full coffee bar! It’s not going to be an overnight process, but with your continued support we can make this beautiful space our home! We don’t have an official opening date just yet, but of course we’ll spread the word as soon as we do. As you may or may not know, the two owners of The Black Cat Market, Indigo Baloch and Olivia Ciotoli met through the local music scene and served on the @mr_roboto_project board of directors together for some time. So being back in a neighborhood filled with so many memories is going to be exciting and nostalgic for us. We’re so eager to join the incredible community up on Penn Ave. and can’t wait to make this space our own. Thank you to everyone who has supported us over the years and been patient as we worked towards this dream. We’re almost at 200 adoptions now and we couldn’t have done this without you. Thank you, endlessly ❤️❤️

Baloch says they plan on taking full advantage of the new space, where they can set up a larger cat room and “foster more cats at a time.” The mission of the Black Cat is to find homes for adoptable cats by allowing customers to interact with them, and the store has so far facilitated over 180 adoptions.

The Butler Street cat room is modest, but cozy, outfitted with a couple of wooden benches and a selection of cat toys and climbing trees. Baloch estimates that they currently bring in around 5-10 cats at any given time, all of which come through their partner rescue organization, Frankie's Friends. 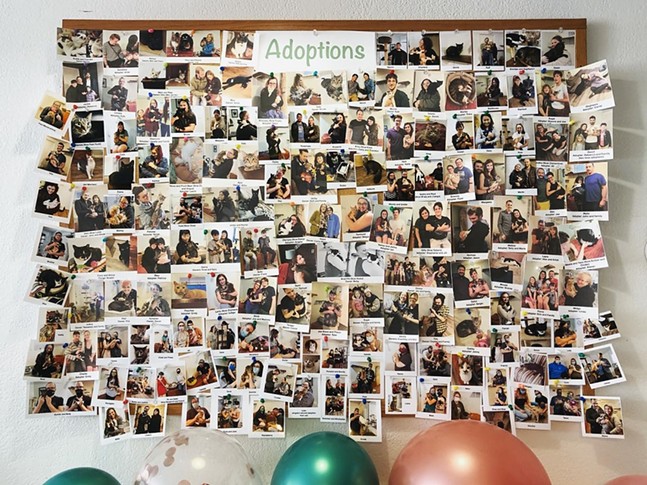 Photo by Black Cat Market
Black Cat Market adoption board
Besides a larger cat room, they also plan on setting up the full coffee bar they have wanted since the beginning. It will also offer other benefits, including being fully handicapped accessible.

“Altogether, this space is going to be bigger and more in line with our dream," says Baloch.

Even so, Baloch admits that they still have a lot of work to do in the weeks ahead, including minor renovations. She says they're aiming for an October opening “mostly because we love Halloween so much and would hate to miss the chance to decorate.”

“As you might imagine, we're just so eager to settle into our new, beautiful home,” says Baloch. “It's so exciting, and we're just so thankful this is all coming together.”
© 2022 Pittsburgh City Paper