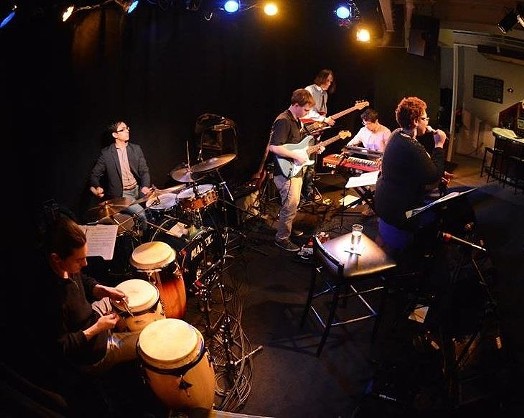 Photo courtesy of Michael Canton
Kinetic
Movement is one of the few things in life that can be considered constant no matter how noticeable or unnoticeable it may be — and the band Kinetic is one whose movements will likely be noticed by many to come in the near future.
The band’s six members are, in many cases, familiar names from other bands, or from solo work: Anqwenique Wingfield as the vocalist, Michael Borowski on guitar, Jason Rafalak on bass, PJ Roduta on percussion and Ryan Socrates on drums, along with the band’s leader and composer, Joseph Sheehan, on keyboard.

At first listen, there’s a noticeable jazz influence in the band’s sound, but Kinetic is more than what meets the ear. Sheehan says the band’s style and arrangement can largely be attributed to West African percussion as well as R&B and modern jazz. Take those sounds and add just the right amount of soulful vocals from the talented Anqwenique and you have something that is unique on the Pittsburgh scene.

The audience responses from the band’s album-release party last month at the Pittsburgh Winery proved it can live up to its name. Between the call-and-response segments with the audience and the captivating solos, there was no one in the room that night who wanted who the show to end.

Kinetic’s debut album, World of Wonder, is for sale on iTunes, Amazon, and CDBaby; as a sample, check out this week's MP3 Monday offering, "Waiting for Giving."