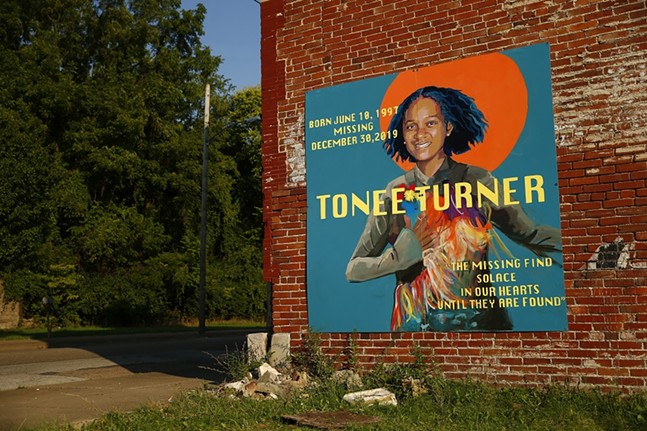 Multi-disciplinary artist Marcè Nixon-Washington and muralist Sandy Kessler Kaminski recently installed a mural of Turner on Braddock Avenue, on the side of a building across from Bell’s Market. The work includes a depiction of Turner with her birthday (June 10, 1997) and the date she disappeared, as well as a quote that reads, “The missing find solace in our hearts until they are found.”

In a Facebook post from Sept. 5, Tonee's sister, Sydnee Turner, wrote that the mural will remain up for six weeks, after which it will be relocated to another building.


Today a mural was installed to remember my sister Tonee Turner and all missing people. The artists and installers Marce...


The mural is a personal endeavor for Nixon-Washington, who says she and Tonee worked together as teaching artists at the Braddock Carnegie Library in 2018. Since then, she says Tonee has been “one of my favorite people on the planet.”

“The grief manifested into an irresistible fire inside of me to find her in whatever way she returns,” she says, disappointed in how Tonee has yet to be found after nearly nine months. “Things became silent and all I wanted to do is scream her name on every street, in every ear, in every neighborhood, in every city, in every country.”

She says she reached out to Sydnee and asked if she could create a billboard or mural to amplify the search for Tonee.

Despite efforts to raise awareness about the case, including an event in February that honored Tonee's love of dancing, little progress has been made. Details from the investigation determine that Tonee was last seen at Dobra Tea in Squirrel Hill. It was also reported that her wallet, cell phone, and keys were later discovered by a firefighter. According to reports, the family believes she may have traveled down Interstate 80 near Homestead.

However, Nixon-Washington believes there are too many inconsistencies in the details that have been reported and she wants renewed attention paid to the case, which has gone cold since initial reports around January. A June update published on the site Missing People in America says that Turner’s purse was discovered by a man riding a bike near a bridge in the Hill District. The purse contained a wallet, cell phone, and keys.

However, Nixon-Washington claims Tonee's wallet was “mysteriously found underneath a missing person poster about a week or two after she went missing.” Her other belongings, including her purse, cell phone, journal, and water bottle, were found by a biker traveling across the Homestead Grays Bridge.

“I am hoping that all parties will be properly questioned and re-questioned,” says Nixon-Washington, adding that a "ceramic object and a pair of shoes" were also found on the bridge that evening. She wants the updated information about Tonee's last known whereabouts to reach the public and for anyone who "think they may have seen her or know of her whereabouts after" to speak up.

A Public Safety blotter from Jan. 1 describes Tonee as 5 feet 2 inches tall, 130 pounds with chin-length black hair. Anyone with information should contact Missing Persons detectives at (412) 323- 7141.

Nixon-Washington hopes that, unlike missing person posters, the mural captures Tonee's essence and spirit, and renews calls for her safe return.

“I hope that the city knows she is loved, we are still searching and we will find her,” she says. “I want the world to know that Tonee is more than just a missing person.”
© 2023 Pittsburgh City Paper