A first production of one's play is hard enough. But while "world premiere" has such a nice ring to it, playwrights find it even more difficult to obtain a second production, with a chance to improve and expand. And that's the very gift that the Pittsburgh Playwrights Theatre Co. has bestowed on two participants from its 2013 Theatre Festival in Black & White: Holiday Edition!: full-length productions of Kim El's An Ubuntu Holiday (opening this week, to be reviewed next week) and Ray Werner's Christmas Star, running in repertory.

Monteze Freeland once again directs Christmas Star, with a larger cast and broader story that fleshes out a holiday tale of war veterans, post-traumatic stress disorder and family dysfunction set near the end of 2005. Given that this is very much a suitable-for-all-audiences Christmas story, it's hardly a spoiler to say that Werner wraps up Star into a neat package with a happy ending. Sure, it's a bit facile, but there's real dramatic tension and not a drop of saccharine, which already puts it way above most "holiday" fare. 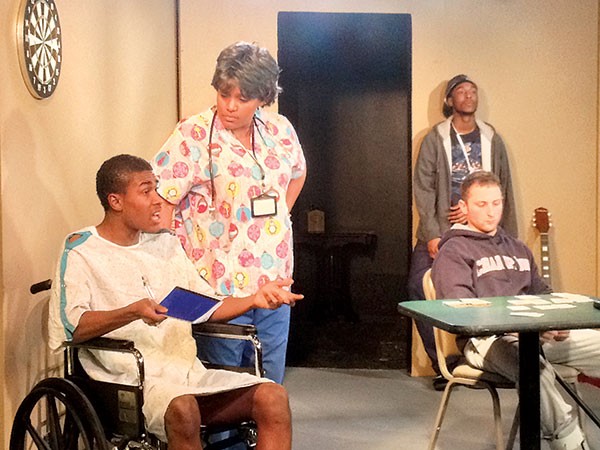 This Star provides plenty of backstory and a bit-too-bright epilogue. The family central to the story is now white, not black, although their primary identification remains Catholic. The all-new first act drags a bit: Three young soldiers (a multi-culti mix of white, black and Hispanic) recuperating in a military hospital tell their stories about life, recruitment, and the incidents that inflicted their physical wounds and their PTSD. A passionate nurse helps them heal spiritually as well as psychologically and physically, reinforcing the therapy aimed to help them cope with their traumas.

The second act mostly follows the original Star: the clash of the wounded Iraq vet and his anti-war-activist/Vietnam-vet father, with doting mom/wife trying to broker a truce. But there's more depth this time around, as the son helps dad with the latter's long-untreated scabs of war memories. The cheery epilogue is saved from turning sappy with an original (though formulaic) Christmas song by the playwright and Mike Gallagher, sung by LaTrea Rembert, as the IED survivor of the first act. Lamont Walker II also returns to tidy up the woes of the Puerto Rican vet, with a Flight 93-themed poem.

The young Anthony Gullikson holds his own as the central character, with veteran thespian Susie McGregor-Laine outstanding as his mother mixing a tumult of emotions. Bill Crean switches gears as the conflicted father, and Dominique Briggs embodies the noble nurse.

Star's oft-repeated theme that America "lost its innocence" on Sept. 11, 2001, is at odds with the play's own revelation of unpunished Vietnam War atrocities. But overall, there's a lot to like and only a bit of humbuggery to grit one's teeth at.