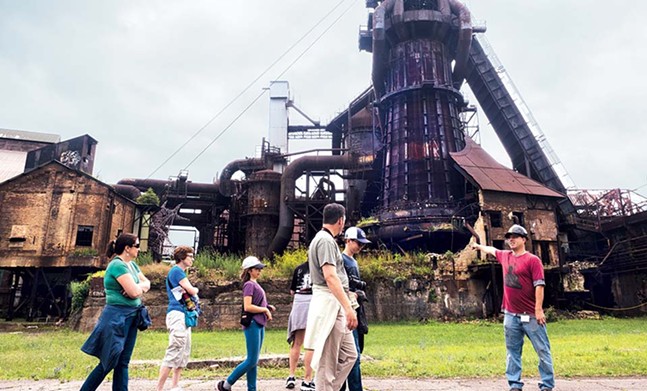 CP photo: Jared Murphy
Carrie Blast Furnaces
Rivers of Steel is continuing its mission of preserving industrial and cultural sites throughout Southwestern Pennsylvania with its latest mini-grant program. And this year, special consideration will be given to applicants that are Black- or minority-led organizations, or organizations that primarily serve BIPOC (Black, Indigenous, people of color) audiences and communities, according to a press release.

"Rivers of Steel's position is that we as an organization, and we as a region, must do more to recognize the important role that Black people played, and continue to maintain, in the heritage of our communities," says Rivers of Steel president and CEO, August Carlino. "So this year, we are challenging grant applicants to present projects to be funded that take on, and will work to overcome, the issues of racism, discrimination, bigotry, and hate that exists in our communities."

The press release adds that the choice to focus on BIPOC applicants for this year's program reiterates Rivers of Steel's "long-held belief in diversity, equity, accessibility, and inclusion and strengthens our commitment to fighting systemic racism and discrimination against people of color amidst the nationwide call for ending racism.”

The mini-grant program was designed to support projects that "sustain Rivers of Steel’s sense of place through the preservation, interpretation, cultural, and recreational assets of the region’s industrial and cultural heritage." The projects may be used to develop new and innovative programs, partnerships, exhibits, and tours within Allegheny, Armstrong, Beaver, Butler, Fayette, Greene, Washington, or Westmoreland counties.

Projects must also align with Rivers of Steel's Management Action Plan, which lays out the organization's mission and goals up through 2026.

Grant amounts ranging from $1,000 to $25,000 will go to projects submitted by nonprofit organizations with a tax-exempt status 501(c) 3, municipalities, counties, and educational institutions. All projects must be completed by March 31, 2022.

The program is funded by the Pennsylvania Department of Conservation and Natural Resources, Bureau of Recreation and Conservation, and the Environmental Stewardship Fund.

Rivers of Steel was founded in 1988 on what it describes as “principles of heritage development, community partnership, and a reverence for the region’s natural and shared resources.” The organization has been instrumental in saving former industrial sites, most notably the Carrie Blast Furnaces in Swissvale and Rankin, and supports economic revitalization through tourism and other initiatives.

The organization also hosts tours, workshops, exhibitions, and other experiences that showcase the “artistry and innovation” of the region's industrial past. For example, Rivers of Steel facilitated LightPlay, an upcoming show that transforms the Carrie Blast Furnaces into a “sensorial maze” with immersive light and sound installations, digital video artworks, and illuminated sculptures by local artists.

Applications will be ranked based on a number of criteria, including budget, alignment for heritage tourism development, and project narrative and outcomes. Proposals that “increase heritage tourism, enhance preservation efforts, involve the stewardship of natural resources, encourage outdoor recreation, and/or include collaborative partnerships” are strongly encouraged.

The application deadline is Thu., Oct. 15 at 5 p.m. Awards are expected to be announced in December.
© 2023 Pittsburgh City Paper