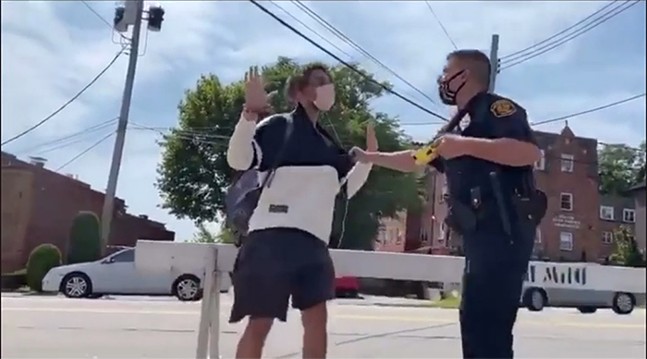 Screenshot taken from video shared with Pittsburgh City Paper
Screenshot of the arrest at the Squirrel Hill farmers' market on Sun., Sept. 6
On Sun. Sept. 6, a Pittsburgh Police officer cuffed, arrested, and threatened to use a taser on a patron at the Squirrel Hill farmers' market. According to videos and a first-hand account of the incident, the patron asked the officer why he was wearing a mask designed with the Thin Blue Line, the symbol of the Blue Lives Matter movement. He confronted the officer, the officer told him to move, and shortly thereafter, the officer arrested the man.

According to the video of the arrest, the man says, “I didn’t do anything,” as the officer is grabbing him by the shoulder. Then, the officer pulls out his taser, grabs the man by collar, and shouts, “Turn around and put your hands behind your back! Now!”
“OK, OK. My hands are behind my back, sir. I have not done anything. She has it on camera right here,” says the man.

“I don’t care,” shouts the officer, as he places handcuffs on the man.

According to the court records, the man was charged with six misdemeanors: resisting arrest, disorderly conduct, defiant trespass, and three counts of possession. (Pittsburgh City Paper is withholding his name because the man did not return a request to speak for this story.)

According to court records, the arresting officer was Paul Abel. According to a Pittsburgh Post-Gazette article from 2008, Abel back then had nearly a dozen charges of misconduct before the city's Citizen Police Review Board.

On Sept. 6, as the man is being handcuffed and asks again why he is being arrested, Abel says, “You don’t listen. I told you to go away, you didn’t want to listen.” The man responds asking, “You told me to go away for what reason? Did I commit a crime?”

Eventually, a group formed around the arrest. Alex Osgood of Regent Square was part of the group, and he witnessed and recorded the arrest.

“I was kind of stunned, not surprised, but to witness it first hand,” says Osgood. "The officer was being incredibly aggressive. He never said that he was under arrest or why.”

The confrontation was initiated when the man asked the officer about the Thin Blue Line mask and its symbolism. (The Thin Blue line symbol was first popularized in the '70s and '80s thanks to novels and a documentary, but it has since been co-opted by the Blue Lives Matter movement, a pro-police movement which was formed in reaction to the Black Lives Matter movement. Blue Lives Matter memorabilia has also been used during white supremacist events, like the Unite the Right Rally in Charlottesville.) The man told Abel that it was a violation of the flag code to have a different color on the U.S. flag, and that it was disrespectful.

Pitttsburgh Public Safety spokesperson Cara Cruz writes in a written statement that the Pittsburgh Police officer was working an approved off-duty detail for City of Pittsburgh Special Events. When the officer was approached and confronted about the Blue Lives Matter mask, Cruz writes that "the officer, who was speaking with a Special Events employee at the time, told the man that he would have to agree to disagree."

Cruz says the man wanted to continue to make his point and show him something on his phone, but the officer wouldn't engage. Cruz writes at this point, a line was growing and the man was told to exit the line. When the man continued on, according to Cruz, then the officer asked for his ID to cite him, and the man refused.

"At this point the officer moved to physically arrest the male, who resisted, knocking the officer’s body worn camera into the street in the process," writes Cruz. "The male continued to resist arrest so the officer told him he would use his Taser if he did not comply. At that point, the man complied and put his hands behind his back to be handcuffed."

Cruz then writes that the officer searched his backpack where he recovered marijuana, THC edibles, and drug paraphernalia and that the man didn't possess a medical-marijuana card. (In 2015, Pittsburgh decriminalized small amounts of marijuana possession, though officers have still been arresting people in the city of possession anyway.)

A request for comment from the office of Pittsburgh Mayor Bill Peduto was not immediately returned. After this story was published, Peduto's chief of staff Dan Gilman tweeted that Abel's case been referred to the Office of Municipal Investigations for review.


This video shows a Pittsburgh police officer arresting a person in Squirrel Hill yesterday outside a public farmers market, purportedly for ‘failure to disperse.’ The arrestee says the interaction began when he criticized the officer’s blue line mask.
pic.twitter.com/oJpdZndfTT

Osgood says the whole encounter lasted about 15 minutes, and the man was taken away in a squad car. Osgood says the man spent the next 10 hours in the Allegheny County Jail. According to court documents, the man was issued a non-monetary bail.

Allegheny County public defender and former candidate for district attorney Lisa Middleman has reviewed the videos of the event and said it appears the officer is arresting the man without cause.

"Thankfully there were many witnesses who can document what actually happened," says Middleman. "For too long, we have relied exclusively on the accounts of police officers and discounted the version of events from those who interact with them. With the advent of cell phone video, it is becoming more clear that not all police officers give truthful accounts of interactions with the public."

The video shows that Abel requested an ID. When the man didn’t give it (which is not required under Pennsylvania law), Abel searched him for it. Osgood says that eventually Abel searched through the man’s backpack, which the man objected to.

“I have noticed Officer Abel there before, always wearing his Thin Blue Line mask,” says Osgood. “I thought he was totally out of line. The guy asked for a comment on his mask. He can be offended, but he is a public servant. He should manage being offended by people.”

Osgood says he was going to file complaints with the city’s Office of Municipal Investigations and the Citizens Police Review Board.

Abel has a long history with complaints of alleged misconduct. In 2008, he was charged with assault for allegedly pistol whipping a man in the South Side, which led to his gun going off and injuring that man. Abel was cleared of those charges by Allegheny County Common Pleas Judge Jeffrey Manning. Before that time, Abel had nearly a dozen misconduct complaints against him. Abel was suspended, but was reinstated thanks to arbitration.

Last year, Abel was also accused of wrongfully arresting a man, and that incident was also sent to the Citizens Police Review Board.

“Reform is only going to get us so far, or nowhere,” says Osgood. “We have to move beyond reform.”
© 2022 Pittsburgh City Paper