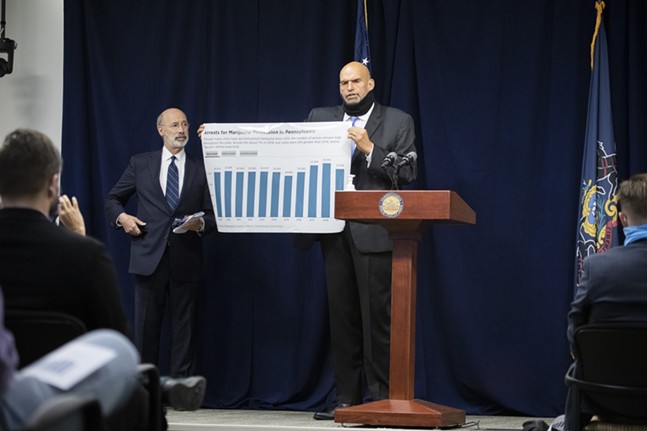 Commonwealth Media Services
At a press conference on Thursday, Gov. Tom Wolf, along with Lt. Gov. John Fetterman, renewed calls for the General Assembly to legalize recreational marijuana, emphasizing the economic relief it would provide Pennsylvania amid the fallout of the pandemic.

In a press release last week, Wolf listed several possible routes of economic relief for the commonwealth, which included legalizing marijuana. This week, he and Fetterman went more in depth about the benefits of an industry that would bring in an estimated 600 million dollars in annual revenue. Wolf and Fetterman, along with Sen. Sharif Street (D-Philadelphia), who was also in attendance, focused on three major points: the high revenue marijuana would bring to the state, the relief it would provide small businesses and farmers, and the criminal justice reform it would create.

“It has been nearly a year since Governor Wolf and I urged the legislature to act on immediate decriminalization and start the discussion about legalization,” said Fetterman. “Now, more than ever, we must stop prosecuting people for doing something that most Pennsylvanians don't even think should be illegal."

Fetterman referenced the report he created after he went on a listening tour of all 67 counties in Pennsylvania to gauge constituents' opinions about recreational marijuana. He reported a 70% average approval rating on legalization from those he spoke to on his tour.

"[T]oday I am proposing we legalize adult-use cannabis here in Pennsylvania with a portion of the revenue going toward existing small business grants,” said Wolf. “Half of these grants would be earmarked for historically disadvantaged businesses, many of which have had difficulties [obtaining] other assistance because of systemic issues."

Wolf said he wanted to "renew" last year's call for the General Assembly to legalize marijuana amid the state's financial strife, and chided them for not making any progress on the issue in the time since, saying that "the legislature has failed to find time to debate, let alone pass," a bill on the issue.

"There is just not the support in the caucus for legalizing marijuana right now,” Jason Gottesman, a spokesman for House Majority Leader Kerry Benninghoff (R-Centre) told the Pennsylvania Capital-Star.

Fetterman brought up the racial disparity in cannabis arrests, the difficulty those charged have in getting a job or finding an apartment (Black adults in Pennsylvania are 3.6 times as likely as white adults to be charged with marijuana possession, according to the ACLU). He said it would easily create thousands of jobs, and that he would push it as much as any other jobs legislation.

"It's a turnkey solution for Pennsylvania," said Fetterman. "I would challenge anyone — my most intensely opposed critics — to name one other policy decision that could have so much immediate impact, and so much unambiguous benefit."

Sen. Street, who mentioned that his grandfather was a dairy farmer, said legalizing marijuana could "effectively subsidize the dairy industry, and would stabilize our other vegetable crops like corn" by creating a cash crop that can be rotated among others.

When asked for comment on republican caucus members who say this issue is a distraction from more important issues like helping businesses, Wolf was perplexed.

"That doesn't make any sense at all," said Wolf. "Are they saying this is a time when we don't need hundreds of millions of dollars in additional revenue that could go to help people who are hurting because of the pandemic?"
© 2023 Pittsburgh City Paper