On view from Sept. 5-27, the show by Bloomfield Garden Club (BGC), a monthly salon created by TD Projects and Bill Julin of Burning Well, will highlight several local artists working in a variety of media spanning dance, music, and comedy, as well as literary, visual, and performance art.

Tina Dillman, founder, director, and curator of TD Projects, says she had originally planned to do a solo show of her own work at UnSmoke, which fell through when grant funding for the project never materialized.

“I needed to figure out how to use the space accordingly, so I approached (Jebediah “Jeb” Feldman, owner of UnSmoke) with the idea of curating a group show that included all the artists from the Garden Club this first year,” says Dillman.

Works on display will include paintings, glass, mixed-media sculpture, photography, video, and sound.

“What you can expect with the show is to be introduced to the full rounded practices of these talented people, as musicians are also including 2-D work that exemplifies their practice as a whole,” says Dillman. 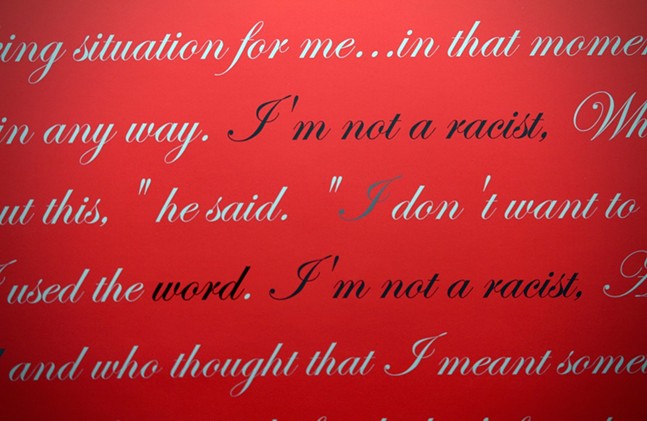 Andrew and Factor partnered back in March with I Am A Haunted House, a collaborative piece that combined movement with found footage and audio of Hollywood icon Joan Crawford. It was originally presented part of their Freshworks residency at Kelly Strayhorn Theater’s Alloy Studios.

CP photo: Amanda Waltz
Bloomfield Garden Club artist-in-residence Jesse Factor in I Am A Haunted House, March 6, 2020
The goal of BGC is to showcase Pittsburgh-based artists from various backgrounds who identify as “female, queer, anti-colonizer, a person of color, or have always felt like they were the outliers,” according to a press release. It's also described as a platform "to create new work in the dawn of this awakening hour and to provide sources of revenue for those that are the most vulnerable.”

Dillman says the UnSmoke show allows for the BGC artists to have “multiple opportunities and different avenues to earn revenue,” as most of the work will be for sale at a 70/30 split, with the artist earning the majority of the sale.

“This was a win-win situation for us all, and I'm grateful to be working with each of them and happy that I can help them with their career and artistic practice,” says Dillman.